Would You Buy a Special Edition? 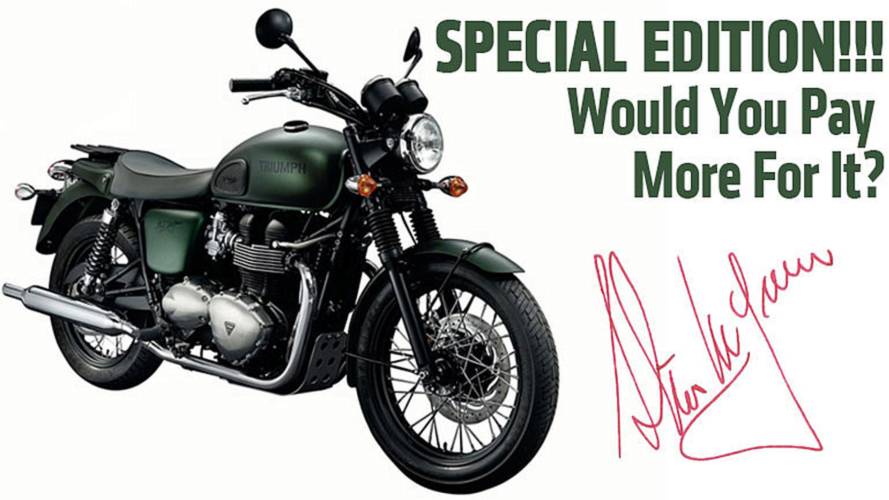 Buying the Special Edition motorcycle is a way of putting an exclamation point on that statement. It is an added deposit of loyalty.

For 2014, Triumph will offer a Special Edition model of the Tiger 800XC. Nattily dressed in black and red, the machine certainly looks sharp and sophisticated. But is such downtown finery fitting for a muscle-and-sinew adventure bike? Aren’t adventure riders just function junkies? Or are they susceptible to the same eye-candy cravings as the rest of us? What is the appeal of Special Editions, anyway?

Special Editions have almost become a tradition of their own, going back at least to the 1991 Harley FXDB Sturgis. They show up all over the motorcycle spectrum, whether it’s Kawasaki’s Vulcan 900 Special Edition or their Ninja 300 Special Edition. Ducati has their gorgeous-bordering-on-tacky “Tricolore” editions. Triumph has had Bonneville and Daytona Special Editions, not to mention their sell-out Steve McQueen Scrambler. Harley seems to have a special anniversary edition every three months or so. That’s fine, but I’m not sure fifteen years warrants an anniversary edition (ahem, Victory).

These are not “S” or “R” or “Luxury” models. The upgrades are almost always purely cosmetic, there is a limited production run, and there is a premium price. Those are the basic rules for making a Special Edition. Not too complicated, and they’re guaranteed to sell, if you’re starting with a reasonably popular base model.

It’s easy to dismiss these Special Editions as pure vanity purchases (“Look, I paid more!”), or ill-conceived investment bikes. That Special Edition bike will only be worth a premium years later under ideal market conditions, and one of those conditions is that you don’t ride it. Most of us do not buy bikes in order to not ride them.

There is something more at work here, however. Clearly, many people love owning Special Editions, and manufacturers love catering to those people. It may not be rational to pay extra for something that doesn’t ride any differently, but we all know this isn’t a rational purchase. Your choice of bike is as much a statement about who you are, as it is about how you ride. It is signing up for your stereotype of choice.

Buying the Special Edition model is a way of putting an exclamation point on that statement. It is an added deposit of loyalty. The best part about it is, only other aficionados will recognize this statement. This is not a way to brag to the world about your purchasing power, but a way to start a conversation with like-minded lovers of the finer points of motorcycle design. It’s not even very important that the Special Edition design looks that much better, just that it is, well, special.

So is it worth an extra $500, in the case of the Tiger 800XC SE, to get that special paint job and accessories, or is this just another rip-off? If you’re a cynic, it’s clearly a scam, but if you’re a romantic, and I think many bikers are, the extra grins may be totally worth it.

Do you own a Special Edition? If so, what model, and do you love it? If not, is there one that could tempt you?