How To Prepare Your Bike For Adventure: Part One 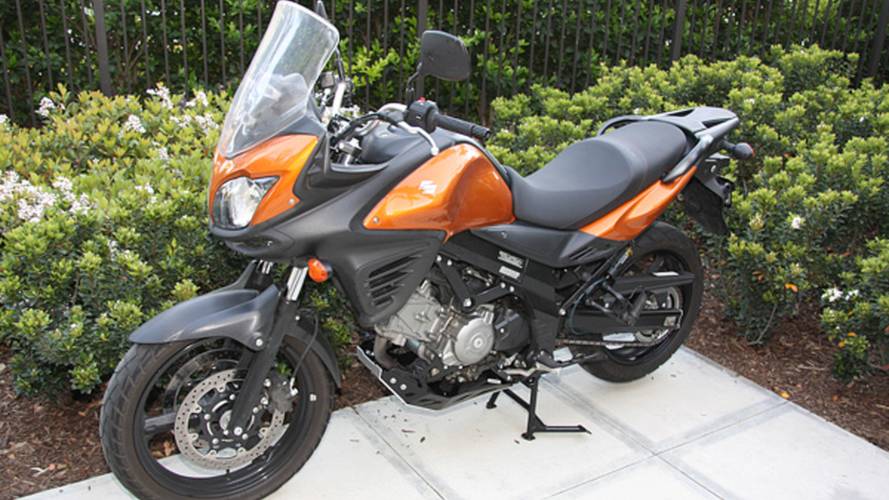 The thing about so-called "Adventure" bikes, is that they don't tend to actually be ready for adventure out of the box. Getting them there typically takes thousands of dollars in add-on protection and performance parts. In this three-part series, we're going to take a base Suzuki V-Strom 650 and build it into something more capable than the OE "Adventure" model for the same $1,500 premium. This is how you prepare your bike for adventure, on a budget.

How To Prepare Your Bike For Adventure: Part Two

You may remember from our review of Suzuki’s updated V-Strom that we really liked the bike, but we were less than impressed by some of the accessories that came standard on the Adventure package.

In particular, we took the chunky aluminum side cases off and left them at home, since they made the bike wider than a pair of Cam-Am Spyders trying to lane split. The crash guards were decent, as was the laminar lip-style screen. There were also some notable omissions in the Adventure spec, and we’d have preferred to address those during the test as well. As luck would have it, we happen to have a DL650 hanging about, so we put together a plan of attack and reached for the wrenches.

Before we could do any damage to the bike, we first called Twisted Throttle. Purveyors of many things adventurey and toury, such as SW Motech hard parts, they displayed their own fully kitted out 2012 DL project bike at several shows recently. If you decided to buy a stock model DL650 instead of the Adventure model, you’d have $1,500 burning a hole in your pocket. Let’s see how far that money can take this bike. Because stock sucks.

Let’s get a couple things out of the way first. Dynamically, the DL650 is kind of amazing. It’s got great brakes with really good ABS. It handles far better than it has a right to, makes good power and is very comfy, even on the stock seat. It will give full-on sportbikes a good run on most roads and generally blows your expectations away every time you ride it. So we had no intention of throwing an exhaust system on this thing that would blow a grand of the budget to liberate 1.37 horsepower.

Instead, let’s talk about some things that didn’t make it on to the Adventure model from Suzuki.

How about something that should be the first purchase on any motorcycle that can fit one? Basically the sexiest part of any motorcycle: the centerstand. I love the humble centerstand with the fiery passion of a thousand suns. Why? Because as someone who actually rides their bike more than 12 miles each year, I need to be able to lube my chain and check slack without having to pull a paddock stand out of my ass. It’s also nice to know your bike will be able to park securely on soft ground… you know, like when you are out adventure riding far away from pavement. A track bike doesn’t need a centerstand, but every other streetbike in the world does. It’s a travesty that OEMs don’t even offer optional stands for the vast majority of bikes today. Suzuki does offer a centerstand for the DL650 but didn’t include it on their Adventure package. Probably because it costs most of $330. The OEM centerstand also compromises left-hand cornering clearance. Screw that.

Twisted Throttle sells SW Motech’s centerstand for the DL650 for under $220. It passes ze Germans’ muster to earn TUV certification and doesn’t require fitting a new super long peg feeler to the left side footrest. Install was easy enough, but make sure that you know how to use a torque wrench and that you have some locktite handy. Also, a few bolt heads get buried during the installation, which can be a bit frustrating but isn’t a deal breaker. Voila! $217.50 spent but we now have a centerstand. Now it’s actually a streetbike you can use!

Next up comes a rather large omission from the entire range of Suzuki’s accessories: a proper bash plate. You don’t get one on the Adventure model because Suzuki doesn’t sell one. All you can get from the OEM is stylish but flimsy plastic chin cowling. If you ever plan on taking your adventure bike into the unknown, you better make sure to protect the exhaust, oil filter and sump, otherwise you’ll be walking home. Another call to Twisted Throttle netted us SW Motech’s engine guard for $259.99. The coolest thing about this skidplate compared to others on the market is that it mounts independently of the upper crash bars (most require a matching set of crash bars as upper mounting points). I’m not sold on the crashbars, but I still wanted the sump protection. If I change my mind later, I can get a set of crashbars from whichever company I choose (Suzuki OEM being a decent option). This installation was about as easy as the centerstand: make sure you have a torque wrench and be prepared for a few frustrating bolt head placements that get hard to reach was the skidplate is in the way. Also, Twisted Throttle claims you can’t remove the oil filter with the skidplate fitted. There’s a drain bolt port and there appears to be plenty of room to get to the filter, so I’m not sure what they’re talking about here.

Cost so far: $477.49. And the bike is already more prepared for adventure than the OEM-kitted model.

Now unless sexy hard parts like centerstands and skidplates bore you, you might remember how the new centerstand makes lubing the chain so easy that you might actually do it regularly (for a change). What if you didn’t have to lube the chain at all? Surely this sort of technology is right around corner, being 2013 and all. Unknown to many riders in the states, reliable automatic chain oilers have been available in the UK for decades from an easy company to remember: Scottoiler.

Made in Scotland and invented by a guy named Fraser Scott (I see what you did there), the Scottoiler system uses a small reservoir of proprietary chain oil that drips directly onto your drive chain at a very slow speed, around 1 to 2 drops per minute. This tiny amount of oil is just enough the keep the chain lubed through capillary action without flinging any oil onto your bike or more importantly, your rear tire. Because the chain is constantly lubed, it stays clean compared to picking up grime with a sticky chain lube. Besides greatly extending the life of your chain and making your riding life sooooo much easier, a Scottoiler promises to all but eliminate chain tension adjustments.

To make sure the chain oiler activates only when you want it to, there are two options to control the oiling valve. One is a simple old-school vacuum arrangement that taps into your bike’s mechanicals to use a tiny bit of engine vacuum (3 CCs of air volume, your bike will never notice). The other option is newer and much higher tech: an all-electric controller that detects bike motion via accelerometer to deploy oil when needed.

Because the ESystem Scottoiler is easy to install but pricier at $279.99, I opted for a challenge and selected the trad VSystem for the DL650 for $129.99. The ESystem only need to hook up to the battery and then you’re done. For the VSystem, you need to track down a vacuum line in the engine bay to tap into with a T-fitting, then route the vacuum line and oil lines appropriately. This is definitely a “measure twice - cut once” sort of affair. If you know what the inside of your bike’s engine bay looks like, go for it, but if you aren’t skilled with a service manual, opt for the ESystem oiler kit instead! The included paper directions are very generic, as you are expected to go to Scottoiler’s website to download a PDF with your bike’s specific installation instructions. However, euro bike owners can look forward to co-branded specific fitment kits for their various bikes. You can now buy Scottoiler products with BMW part numbers on them, too.

Once you figure out where everything needs to go, use the supplied zip ties and hardware to fit both the oil metering valve and the oil delivery line as required. Then prime the system with the supplied oil and run the bike. It’s really quite awesome to see your chain get perfectly moistened without any fling. (Watch this space, as we’ll be updating how well the Scottoiler performs down the road as well.)

So far, we’ve spent $607.48, less than half of our allotted $1,500. For those six C-bills, our V-Strom is better protected and easier to live with than either version of the DL650. And to really sink that home, it’s as basically as easy to live with as a shaft-driven bike. More to come, so stay tuned.