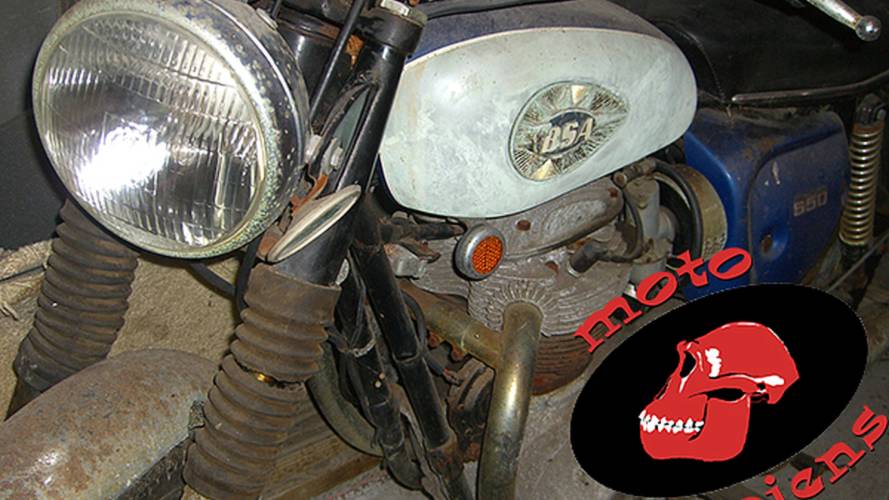 A BSA Barn FindI’ll admit it: I was vulnerable. I was in a weakened condition. In a rare fit of fiscal responsibility, I had sold my ’71 Triumph...

I’ll admit it: I was vulnerable. I was in a weakened condition. In a rare fit of fiscal responsibility, I had sold my ’71 Triumph Tiger the previous summer. It was the perennial project bike. It was beautiful and wild, old and naughty. Like Helen Mirren. It coughed and smoked, and had other vices. It had needed me, and I needed a bike that needed me. A bike like this 1970 BSA Lightning.

I had the ’08 Bonneville, of course, but bikes are like horses: they don’t thrive when they’re kept alone. They need a companion. One bike in a garage is a lonely, lonely sight. Scott Colosimo, the Cleveland Cyclewerks guy, says you have to have at least three bikes: your daily rider, your special purpose bike (whatever your thing is: racing, off-road, touring, etc.), and a project. At that moment I was down to 1 for 3.

Jump back five years. A friend of mine, who rides an ’81 BMW, had told me about his friend who happened to be a prominent architect and had this old BSA in the back of his garage. The story was, the guy had bought it in England, rode it around Europe for a summer, brought it home, and parked it. When my eyebrow raised, my friend had said, “Forget it. He’ll never sell it. He’ll probably to give it to his son.”

I happened to meet the guy once, and I waited four seconds before bringing up the bike. It was clear my friend was right. I received a disdainful look when I hinted that if he ever wanted to sell... It was like I had asked if his wife would mind if I called her in the event of his demise. Clearly the bike was a talisman to him. I totally understand that. It’s part of him, part of his youth. He may not have ridden it since before I was born, but he definitely thinks about it.

These things aren’t transportation – they’re part of our identity. Who am I to offer him a fistful of dollars for his identity? So I dutifully forgot about it.

Then last year, the spring after I sold the Triumph, I got an e-mail out of the blue. His son wasn’t interested in the rusty old thing, and he wanted a good home for it. Attached were four photos. When I opened the attachments, I heard the Sarah McLaughlin music from the SPCA ads. It was a three-legged dog, waiting for that big-hearted person to adopt it. The bike was pleading with its big Lucas headlight, and I could almost hear it wimper. Oh, I am a softie.

“Of course we’re not going to buy this thing,” I told my wife, “But we have to go look.” God bless her, she acted like she believed me.

We went out to his house with a tool kit and a flashlight. We had to unbury the bike a bit to get at it. A 1970 650 Lightning. It wouldn’t roll, so I crawled over it in the little space in the back of his garage. I pushed the kickstart lever with my hand – it kicked over, and there was even some compression. I looked in the inspection ports – it looked brand new inside. 5,000 miles on the odo. The clutch worked, and it shifted cleanly through the gears. It had oil and half a tank of what used to be gas. It was like he had just parked it for the week, and a week became 40 years. It was a time capsule. It was the Well of Souls. A cobra hissed at me, and I waved my torch at it.

There were other things, too. He was an architect – I’m an architect. His son’s name (I’m not kidding) is Carter. His last name is my maternal great-grandmother’s maiden name (also not kidding). He parked it in the summer of 1972 – the summer I was born. Now, I don’t believe in fate or superstition, but I am not above using coincidences to justify what I already want.

After the inspection, we sat and had some iced tea. He had all the papers, including the original bill of sale from London. He had a price in mind that was just more than I could possibly do. I kind of knew I was kidding myself to come out there, but I said I’d think about it. That night I called him, and he could tell by the tone of my voice what my answer was. I wasn’t playing hardball or negotiating. I just couldn’t buy it. I told him I’d probably be able to help him find another buyer.

A few days later, he called me again. He wanted the bike to have a good home; he didn’t want it to go to someone who would just re-sell it right away. He offered me a price I could not refuse. I know he could’ve gotten more for it without too much effort, but he cared more about the bike than the money. It made me feel that accepting it was a solemn duty. I didn’t hesitate. I was being asked to volunteer for a special mission. “I’m your man, captain,” was the only appropriate response.

These things are not machines. They are crucibles, chalices for our effervescent intoxicating spirits. They respond to us and test us. They change us, and we want to pass it on. Some guys would have forgotten about the old thing in the garage, or would be glad to be rid of it. Not this guy. He cherished it, and even if he hadn’t turned that throttle in 40 years, he is still a real biker as far as I’m concerned.

The next Saturday, I got a few dudes to help me physically lift it onto my trailer. All went smoothly, and I was ready to leave the old guy’s driveway in a few minutes. His wife took a picture of him sitting on the bike. We shook hands, and the generational conferring was complete.

I brought it home and called my neighbor to help me unload it. He is a great guy, and, just as importantly for this, strong. He came right over. He took one look at the BSA and said, “Whatsa matter? The other bike didn’t have enough problems for you?”