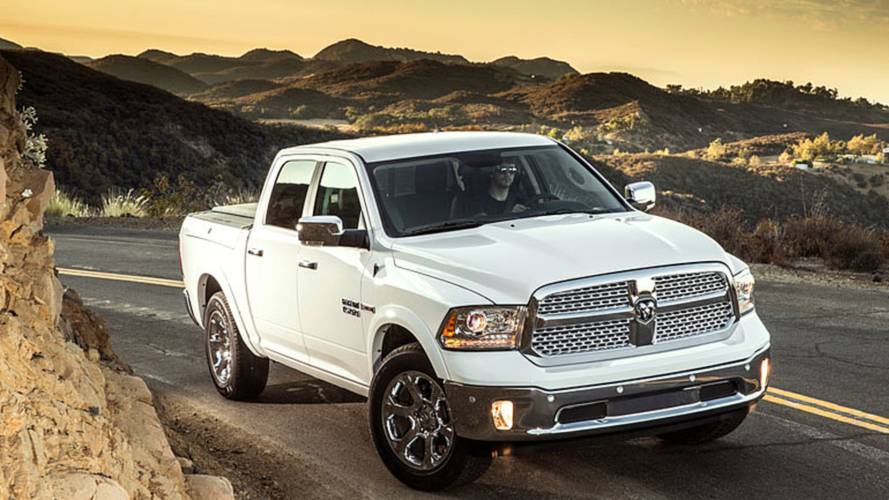 Fuel economy is the 2014 Ram 1500 EcoDiesel's primary mission, but the engine pays benefits in towing and hauling ability as well.

The Big Three have been offering turbo diesel engines in their heavy-duty pickups for ages, but the Ram 1500 is the first half-ton light-duty pickup to offer diesel power. Fuel economy is the EcoDiesel's primary mission, but the engine pays benefits in towing and hauling ability as well.

Ram - the pickup truck formerly known as Dodge - introduced the updated 1500 for 2013, and the big news for 2014 is the new diesel powerplant. Ram is well known for the Cummins diesel in their heavy-duty pickups, a scaled-down big-rig engine that can practically pull the Moon out of orbit. However, the EcoDiesel is not a Cummins engine; it's a small-ish V6 from Italian enginemaker VM (which, like Ram's parent company Chrysler, is partially owned by Fiat).

While towing may not be the EcoDiesel's focus, that doesn't mean it isn't good at it. The 3-liter V6 engine puts out 430 lb.-ft. of torque, more than the HEMI V8, and while it's nowhere near as quick when running light, it doesn't bog down under a heavy load the way smaller gasoline engines do. Towing capacity ranges from 6,600 to 9,200 lbs depending on equipment and configuration; we towed a 3,800 lb. boat trailer and were impressed by the engine's power and fuel economy and the tow rig's stability. The Ram 1500 EcoDiesel should have no problem handling a travel trailer on the bumper and a couple of bikes in the bed, but we'd be wary of towing at the high end of the truck's capacity; we've towed 9,000 lbs with a gas-powered Ram 1500, and the brakes didn't feel up to the task.

One notable feature is the optional RamBox storage lockers, which provide lockable storage space in the walls of the bed. They're perfect for small odds and ends like gloves and muddy boots.

Under the Ram 1500's burly hood sits the VM A630 turbo diesel, a 3-liter V6 rated at 240 horsepower and 420 lb.-ft. of torque, with the sole transmission choice being Chrysler's new 8-speed automatic. Unlike the Cummins engine in the heavy-duty pickups, this engine was not designed for raw pulling power, but rather for refinement and fuel economy. Official EPA fuel economy figures had not been released at the time of writing, but Ram says they will exceed the gasoline V6's best-in-class rating of 18 mpg city and 25 mpg highway. We saw 24 mpg in mixed driving, so we wouldn't be surprised if the EcoDiesel's highway figure is close to 30 mpg. The engine is compatible with biodiesel blends up to B20 (20% biodiesel / 80% petroleum diesel).

Like other diesels, the VM uses a selective-catalyst reduction emissions system, which means it requires diesel exhaust fluid (DEF) for its emissions system. EPA regulations say the engine must be disabled if the DEF tank runs dry, so Ram puts a DEF level gauge right on the dashboard. Not that drivers need worry; the tank is sized for 10,000 miles of driving, equivalent to the 1500 EcoDiesel's oil-change interval.

We're amazed at what a nice place Ram pickup cabs have become. The 1500's 2013 update brought a new level of comfort and refinement, a revolution and a revelation compared to the cheap interiors that came just a few years ago.

The EcoDiesel fits well into the newly-refined Ram; it's about as quiet and unobtrusive as a diesel can get, purring softly at idle, thrumming contentedly under acceleration and going all but silent at cruising speeds. Like most diesels, off-the-line acceleration is not all that impressive; Ram lists the official 0-60 time at nine seconds, compared with 7.5 for the gasoline V6 and under 6 (!!) for the HEMI V8. Mid-range power is much better; with its stout torque curve, the EcoDiesel merges and passes like V8-powered trucks from just a few year sago

We have to point out the optional ($1,695) air suspension, which turns the Ram 1500 into the smoothest-riding and best-handling half-ton pickup on the market. Even with regular steel springs, the 1500 compares favorably with the Ford F-150, though it's not quite as cushy as Chevy's Silverado - of course, neither of these trucks offer diesel power in their half-ton variants.

Fantastic ride and handling, especially with the optional air suspension

Ram does not have the same reputation for durability, quality, and longevity as Ford, Chevy and Toyota

EcoDiesel-equipped Rams start at $29,795 including destination fee, with full-loaded examples going for over $58,000 (whew!!); the diesel engine brings a $4,000 price premium over the 3.6 liter gasoline V6. Will the engine pay for itself in higher fuel economy? Diesel fuel prices can vary widely, so it's hard to say; in some locales, it could take as long as twenty years to recoup the cost. Owners looking to tow heavier trailers will most likely be comparing the EcoDiesel to the HEMI V8, and here the diesel comes off looking better: the price premium is $2,850 and payoff could come in as little as five years, less in states like California where price gap between diesel fuel and gasoline is smaller.

The diesel half-ton pickup is an idea whose time has come, and we like Ram's execution. The EcoDiesel is refined and efficient, and while towing and hauling abilities aren't the primary focus, they benefit from diesel power. We like the truck in which the engine is wrapped, too, but the price is high and as for durability and reliability, we'll just have to wait and see.

A great idea, well executed. If the Ram turns out to be as reliable as it is appealing, we'll bump that up to a nine.

What do you think - would you consider a diesel-powered half-ton pickup?

Best 2014: Trucks and SUVs For Towing and Hauling

Best 2014: Trucks and SUVs For Towing and Hauling