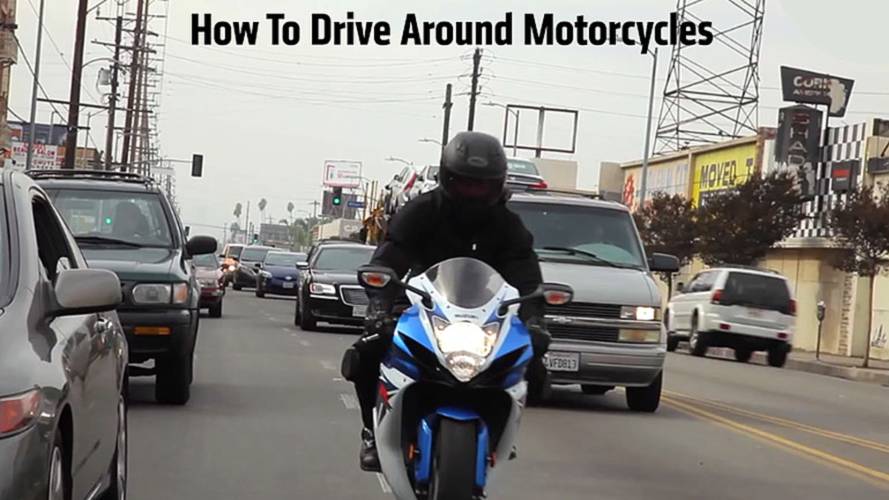 Bikes move faster than cars through traffic, leading to unique challenges for the driver. This is how to share the road with motorcycles safely.

“Oh my, motorcycles just come whizzing by so fast!” We’ve all heard this from our aunts/friends/in-laws, who feel duty bound to tell you how scared they feel driving around motorcycles. But how do you respond? This is advice you can give to your friends on how to share the road with motorcycles - safely.

It’s honestly not hard for the average car driver. Four-wheeled vehicles are slow to turn, slow to accelerate and most drivers never get anywhere near their car’s maximum braking abilities. But it’s also worth emphasizing. If they’re driving around motorcycles the most important thing they need to do is give riders the ability to anticipate their actions: use turn signals (they’re that funny stalk that juts out behind the steering wheel’s left side, you may need to demonstrate how this works); don’t come to a sudden stop in the middle of the road; don’t race up to an intersection as if you might blow through it; don’t slowly creep out of a side road into traffic as if you might suddenly pull out; don’t weave around a lane on the highway as if you might wander into the next one. If a car driver really feels the need to do something when they see a scary bike, make this it. Just be predictable. We will return the favor.

Not only do motorcycles come equipped with much more powerful brakes than cars, but motorcyclists tend to be more skilled operators of their vehicles and so may brake faster than car drivers are anticipating. As a result, it’s worth emphasizing that it’s a very good idea for cars to leave a little extra space when following a bike on the road.

Alert car drivers often panic when they see a bike coming through traffic, jerking the wheel to give the rider extra room. Not only is that extra room not necessary, but any unpredictable movements can cause problems for other road users. Just because the motorcycle the driver saw is to their left side, doesn’t mean there’s not another one coming up on the right. The best thing a driver can do while bikes split past is just to stay calm and hold their position in the lane.

Cheesy awareness campaigns aside, it’s driver inattention that kills most motorcyclists. Put down the cell phone, turn off the Sponge Bob, save the child discipline for the safety of your own home and concentrate on the task at hand: getting where you’re going safely and without running over any motorcyclists. There’s psychology at play too: if a driver looks for cars, all they perceive is a lack of cars, not a presence of motorcycles. Hammering home the need to look for bikes too may just fire a driver’s synapses at the right time and keep them from turning left in front of one of us at an intersection.

5. Bikers Are The Same As You

Recent events in New York may have car drivers even more scared of large groups of riders than before. It’s worth reminding them that most Harleys cost $20,000 and up and are more often ridden by accountants and dentists than roving packs of criminals. They may seem scary with their loud exhausts and tough facial expressions, but really it’s just a bunch of guys playing dress up. People in a pack of sportbikes may be younger, but they’re just the same type of kids that put big rims on Civics and probably still live at home with their parents. You can’t get credit to buy one of these expensive toys if you’ve got a criminal record. Overall most guys on bikes are commuting to their jobs, and running errands just like you. They are just able to get through our increasingly congested roads more quickly then their four-wheeled friends.

What advice do you have for motorists when it comes to looking out for motorcycles on the road?

Why Bikes Ride Between Cars: How And Why Motorcycle Lane Splitting Is Safe And Benefits Everyone

Help Further: How To Be A Polite Motorcyclist

Ride Every Day: How To Commute On A Motorcycle