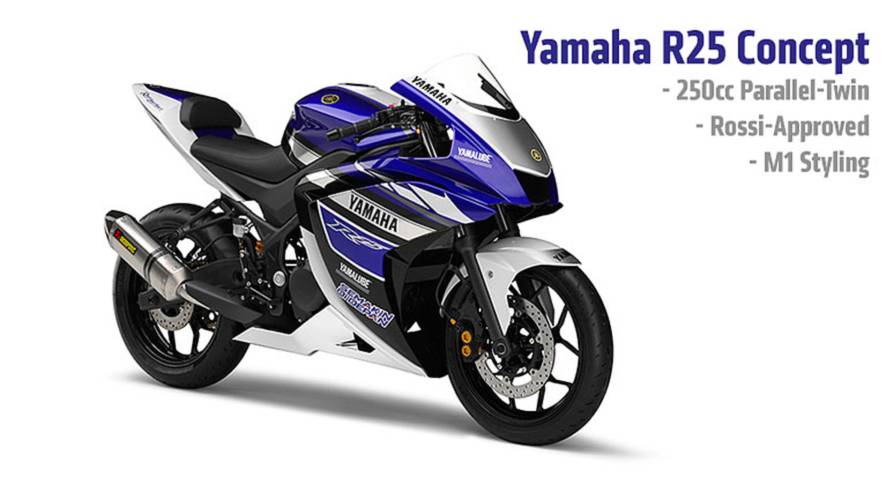 "This bike really packs a punch," says Valentino Rossi. The Yamaha R25 Concept previews an all-new, 250cc, parallel-twin sportbike from the brand. With styling based on the Yamaha M1 MotoGP racer and high-spec components (including radial tires), this is one entry-level bike you should get excited about.

Aside from the lack of headlights and the track day tires, this thing looks totally production ready. The Right-Way Up forks and single front brake disc (with non-radial) caliper are de rigeur for the class and promise an affordable price. What appears to be a steel-tube perimeter frame wraps the liquid-cooled, parallel-twin motor. The aluminum swingarm is appropriately diminutive.

With presumably a price splitting the gap between the $4,199 Honda CBR250R and $4,999 Kawasaki Ninja 300, this bike should sell like hot cakes. Particularly given its GP-aping style, which will give it particular appeal in both Europe and Southeast Asia, where that sport is most popular. That's why Yamaha is attaching the Rossi brand to the bike from the start.

Valentino Rossi has been brought in to endorse the R25.

Details are so far limited to the 249cc engine, its parallel-twin configuration and what we can clearly see in the photos. We'll be sure to bring you more information as the R25 moves towards production.