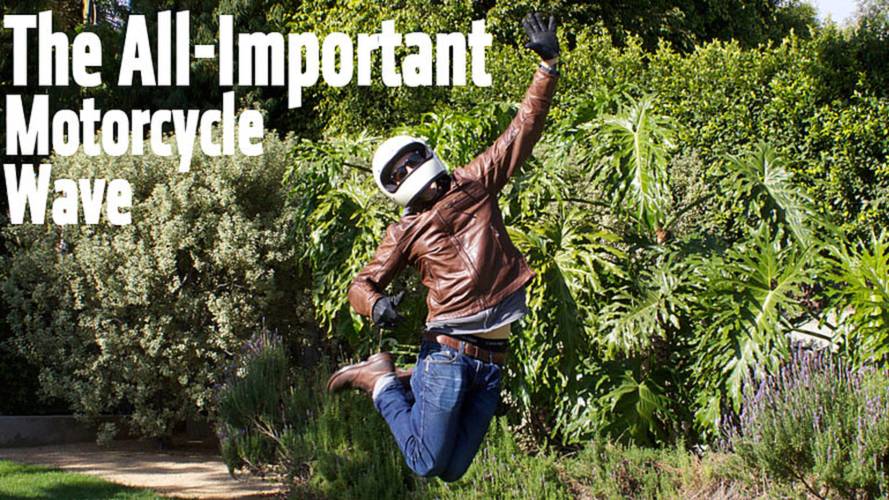 Ah, the ever important motorcycle wave. Can't decide who to wave to and how to do it? We're here to help.

It was August and I was riding a newly acquired Honda Rebel, my first motorcycle. Riding north on Mills Avenue in Claremont, California, a generously wide, two-lane road with a center turning lane, I saw a motorcycle in the distance riding toward me. This was it, the moment for my induction into the brotherhood of riders, my chance for my first motorcycle wave. As the other motorcyclist approached he casually removed his left hand from his handlebars and threw me a tasteful two-finger salute, arm extended slightly below the level of his grip. My response was to violently and awkwardly throw my clenched fist into the air at a slight diagonal, kind of like a Jersey Shore dance move but on a motorcycle, going 45 mph. It was awkward and completely ridiculous, but I felt the connection. To me, that wave was affirmation that I had been seen an honest to God motorcyclist, who had been acknowledged by another as one of their own.

My wave needed work and after a few years, a lot of miles and much trial and error, I have developed a bit more of a tasteful and subdued greeting. Here is the genesis of how my signature wave came about.

I believe that I am the sole motorcyclist to ever preform this maneuver and it should stay that way. It should also stay in the past where it belongs on that early ride on Mills Avenue. In my opinion, unless you are being led into battle by William Wallace, the fist pump is as overboard as one can get. Calm down bud!

This is the elevated, straight-armed, open-handed wave. It is also a greeting that I see on the road fairly often. This wave is pleasant and well meaning at its core and it is one that I also tried to adapt early on. The problem is that this wave comes off as the equivalent of an over-enthusiastic cafeteria crush. Flattering but still a bit overboard for a total stranger.

Finally, there is the mostly extended, slightly-below-the-bars, two-fingered, “Hey.” After a few tries, I decided that this was the pinnacle of motorcycle greetings. It is polite, casual and, yeah, it looks cool-ish too. This wave simply says, “Hey, have a good one,” and leaves it at that. Its beauty is enhanced by the fact that it allows the rider to more or less maintain the shape of the grip with his hand while waving and keeping his arm close to the controls. It’s the one I use and bet many of you do too.

The greeting you use to signal to fellow riders should be yours and it should reflect your personality. By all means, if you are a freak, go for the Jersey Pump. The main thing is that we are a community of riders and saying, “Hey” keeps us that way. So create a signature wave, practice it and own it when you ride.

When I’m on the road I make a point to always acknowledge fellow riders when I can do so safely. I even wave at the people with the weird Mohawk thing on their helmets. I may not understand their affinity for this interesting accessory but what I do understand is that we share a passion for motorcycles.

So tell me, what kind of wave do you use?

Etiquette: How To Be A More Polite Motorcyclist

Etiquette: Get Off My Bike, Please