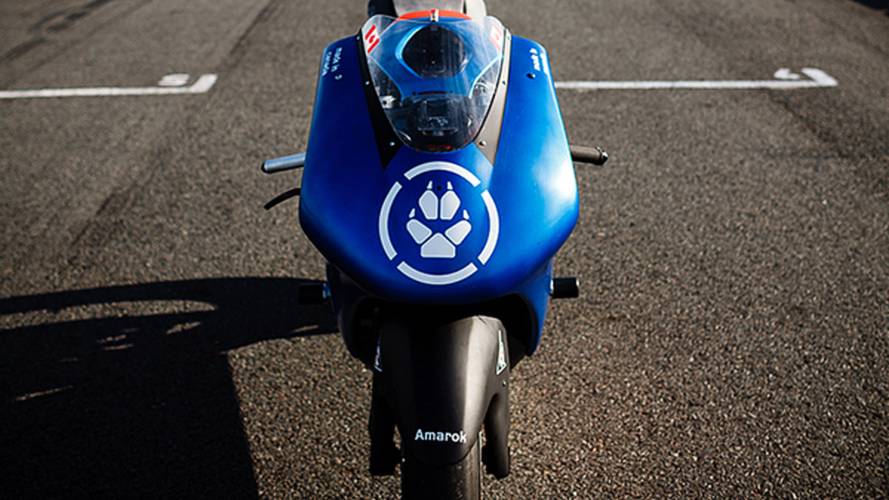 "t is truly exciting to be racing with Amarok," says Tracy. "After talking with Amarok co-founder Michael Uhlarik, I knew this was a team of innovators who have pushed the limit building an electric motorcycle that I believe can set a record at Pikes Peak."

"Since making our first public debut here on Hell For Leather, we've been pretty quiet," states Uhlarik. "The reason being, as always with small organizations in the motorcycle industry, were limitations in resources and our desire not to promise what we could not deliver on. We had hoped, believed and planned to race in the TTXGP in 2011, but a number of delays and instabilities from various sources really wreaked havoc on our ability to participate. Lots of people were disappointed, most of all us, and some even resorted to calling us out as vapourware or just some big-mouthed dreamers."

"Since then, we concentrated our efforts on getting the P1 sorted out, properly," the designer continues. "The updated prototype, still the same fuselage revealed in HFL two years ago, is so substantially revised in terms of running gear, suspension and of course power train parts that it was re-designated P1A for "Advanced". The weight is on target, power is up and more reliable, and we are making some special changes for the Pikes Peak event that we hope will put the P1A on another level in terms of power-to-weight."

The P1A employs a hand-crafted aluminum monocoque chassis, drastically reducing weight. "The 325lbs P1A is about producing the best handling motorcycle on the planet," states Uhlarik.

Uhlarik continues: "With this year's Pikes Peak race to the clouds, we are aiming to do something special as we set the Amarok concept off in competition for the first time. Our excitement level is beyond description. Its been a really long, challenging road that's brought us this far."

"Of course, we expect problems, and are doing our best to prepare for them. All new vehicle programs I have ever participated on, including those at giant international OEMs, problems during development happened. Discovering design flaws, errors and just plain old-fashioned bad luck are all part of the game, and racing competition magnifies probabilities of failure. Its why we race. Its why it really does improve the breed."

"All I will promise is that we will be there, that the P1A will be fast, and that with Greg on board we are going to get a dramatic performance out of her."

The hillclimb kicks off on 24 June. We'll bring you coverage, hopefully from the event itself.