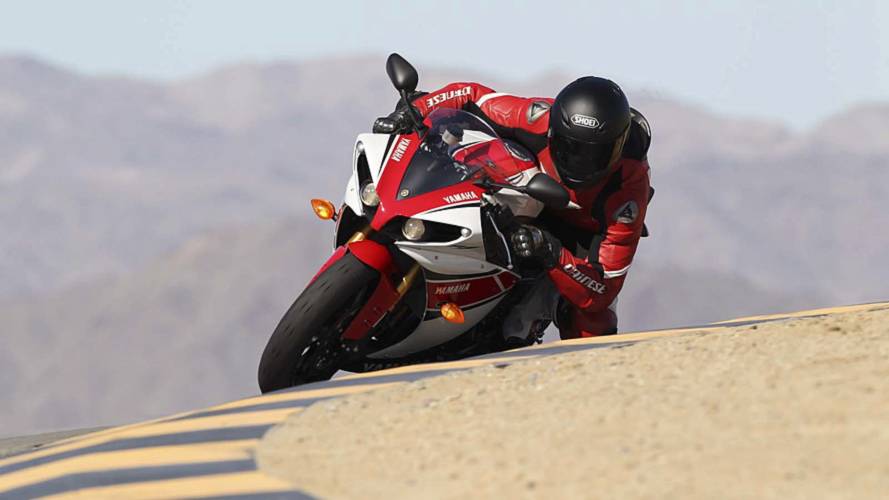 This 180 bhp superbike has been updated with traction control, smoother fueling and a new rear shock. Learn more in our 2013 Yamaha R1 review.

The 2013 Yamaha R1’s been updated with the addition of traction control, smoother fueling and a new rear shock, all in the name of making the 180bhp superbike more exploitable.

Research specs, pricing, insurance and compare the 2013 Yamaha R1 to other superbikes here.

To us, the 2013 Yamaha R1, for the last nine years, has been one thing above all other superbikes — an ultimate cornering machine. The introduction of the crossplane crankshaft in 2009 complimented that prowess by enhancing a rider’s feel of what the rear wheel was doing, meaning you could get on the power that much earlier in complete confidence.

Settings 3 and 4 allow you to slide the rear out of corners like a pro, just in complete safety. Ever ridden an R1? Imagine riding in aggressive A throttle mode, then, as the rear wheel begins to spin, switching to mile B mode. That’s what it feels like when TC saves a slide. the power delivery soften enough that you can ride out the slide without letting off the gas one bit.

The big question here is, “is it worth spending up to the 2013 R1 over a used model with a budget for modifications?” We have to say, after riding it hard on street and track, go for the new model. Its smoother power delivery and all the other subtle changes really do make it a better overall package. Plus, you gain this huge safety net in the form of traction control. The 2013 R1 gives you the confidence to push the now-higher limits.