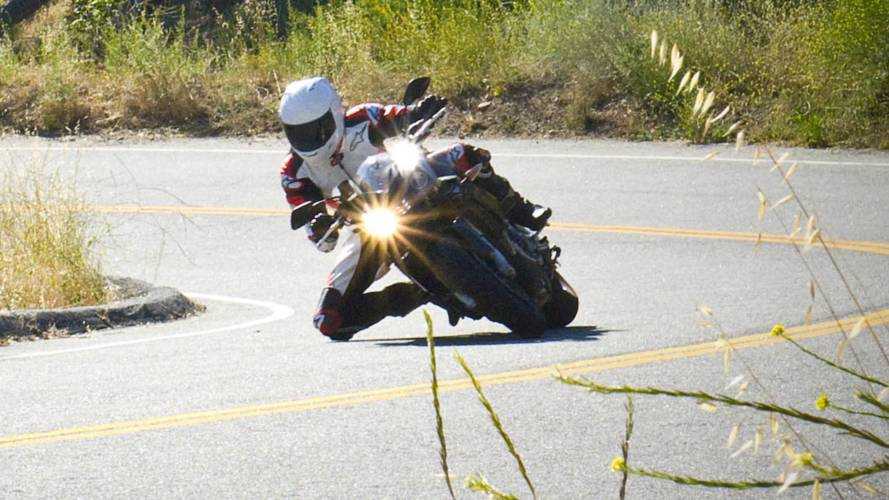 An Italian streetfighter worthy of the name.

Take the traditional streetfighter formula—no fairing, upright bars—and apply it to one of the fastest, most technologically advanced superbikes ever made—the Aprilia RSV4. What do you get? This Aprilia Tuono V4R. This thing is an absolute monster.

The Tuono V4R is an absolute beast of a motorcycle. 168bhp in a naked bike is just ridiculous and takes real concentration and commitment to get anywhere near full throttle.

Unlike most other naked bikes, it literally is just a superbike shorn of its fairing. Same frame, same 999cc V4, same suspension (as the RSV4 R). The only downgrades come in the form of non-Monobloc Brembo radial brake calipers and slightly heavier wheels. The bike retains Aprilia Performance Ride Control, the most sophisticated set of rider aiding electronics yet. APRC includes user-configurable traction control, wheelie control, quickshift, and even launch control; it really does help you ride faster, safer.

The Pirelli Diablo Rosso Corsa tires on both this beautiful black version and that ugly yellow one we filmed with show significant signs of tearing, indicating that the slides I’m feeling aren’t just occurring in my imagination. That I (a long ways from being a rider of Jamie’s caliber) am comfortable ringing so much performance out of such a fast bike, on the road, is perhaps the best possible endorsement of APRC’s efficacy.

Wheelie control? Well, riding with a former racer two nights ago, the Tuono easily walked away from his Z1000, simply putting down its power in situations where the Z1000 would just lift its front. It’s not that the Tuono won’t wheelie, it’s just that the front end comes up much, much later than you’d expect with wheelie control switched on. Switch it off and you can pull roll-on power wheelies simply by opening the throttle in 4th gear at 100mph. Just ask any one of the drivers on the La Brea on-ramp to 10 West around 7pm last Thursday.

Of course, the bike you see here isn't standard, instead serving as a rolling test bed for the brand's own "Aprilia Racing" upgrades.

Complete with Aprilia’s “Race” engine mapping, the Akrapovic exhaust noticeably smooths out power delivery, even where the stock fueling is already very, very good. It’s no louder than stock either, while ditching a fair amount of weight and losing the catalytic converter. The stock pipe on this Tuono and the new RSV4 is unbelievably loud, straight from the showroom. The "Aprilia Racing" mirrors and levers aren’t a big deal, but both components are super high quality and feel really nice to use.

The Ohlins TTX36 shock is predictably the biggest change. Honestly, I think it helps more than TC as it actively aids traction rather than merely limiting slides. If you want to upgrade a Tuono or RSV4, spend here first.

In transition from fully-faired race replica to upright naked, the Tuono has lost some of the planted feeling of the RSV4’s front end. Credit that to a minor shift in the rider’s weight from front to rear due to those nice, comfy, high bars. It’s not a huge difference, but leads to less confidence in the front end while riding on the limit. I had a pretty significant front-end slide while filming that apparently looked more dramatic to Jamie behind me than it felt from onboard. It’s a credit to how communicative those tires and the Tuono’s suspension are that it didn’t feel like catching the slide on my knee was a huge deal.

With a price newly slashed from $14,999 to $12,999, the Tuono is something of a bargain. Ducati no longer sells the less-powerful, less-capable Streetfighter 1098, but even the smaller Streetfighter 848 comes in at $300 more than the Aprilia.

The $10,999, 136bhp Kawasaki Z1000 is cheaper, but noticeably slower in a straight line and would be left for dead in corners, where both its suspension quality and ground clearance are sub par.

And then you start comparing the Tuono to less comfortable liter bikes, the cheapest of which, the GSX-R1000, costs $13,799, makes about the same power and comes with lower quality brakes and suspension. And no electronics.

An exotic brand, a hugely powerful V4, good suspension, all-day comfort, and the best electronic rider aids out there? This Aprilia is a bargain.

As fast and as capable as a modern superbike, all in a comfortable package.