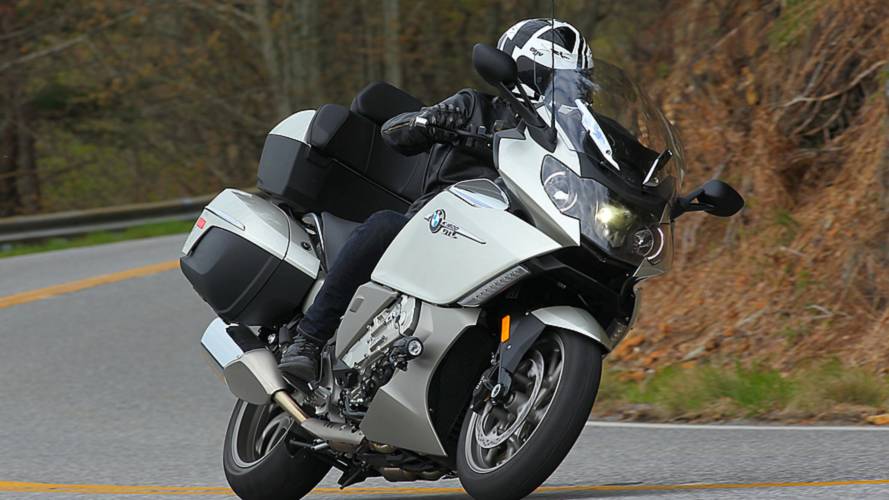 After putting a couple hundred miles on both the BMW K1600GT and BMW K1600GTL, I’m afraid I can’t report that they’re all-day comfortable. You see, even two days later, my thighs are still sore. It’s not a question of ergonomics, it’s just that spending an entire day hanging off the side of a motorcycle isn't exactly comfortable and that was the only way keep the pegs on the GTL from wearing completely away. This new six-cylinder BMW isn’t so much a Honda Goldwing rival as it is an entirely new category of motorcycle—the Supertourer.

In practice, that means full-throttle, multi-gear acceleration runs don’t scare the crap out of you the same way they would on the S1000RR but you’ll be able to access a very healthy amount of acceleration at any speed in any gear. The engine’s so smooth, so torquey and its fueling is so flawless that it’s easy to forget you’re in sixth gear as you slow down for towns, then realize you’re still in it while trickling up to a stoplight at 10mph. Even at walking pace speeds, cracking the throttle open in top gear results in strong acceleration rather than hesitation.

That broad torque curve is also way more friendly to fast mountain road riding than a peaky four-cylinder. There’s just no need to worry about which gear you’re in, more throttle always results in more acceleration no matter where the revs are.

All this isn’t to say the six isn’t exciting to use, just that it has a remarkably different character to most other motorcycle engines. If you’ve ever driven a straight-six BMW car like the 335i or new Z4, you’ll be familiar with how usable and fun they can be. Even on these huge tourers, there’s still significant urgency to the power from 5,500rpm to the redline at 8,500.

The GT weighs 58lbs less than the GTL, has a seat that's 1.2 inches taller and noticeably slimmer, doesn’t come with a standard top box/backrest, has a slightly lower screen, higher foot pegs, more forward bars, firmer suspension and starts at $20,900 to the GTL’s $23,200. That’s it. having said that, they’re pretty different motorcycles.

The difference is mostly in ergonomics. Where you sit in the GTL, you sit on the GT, with legs bent a little more. Both bikes are sit-up-and-beg though. The differences don’t necessarily affect comfort, more how you interact with the motorcycle. The GTL’s wide, deep chair subconsciously encourages a passive experience, with you just sort of siting there and making minimal inputs. The GT’s narrower, taller saddle encourages you to be a bit more active, using your body weight to help control the motorcycle. You can still hang off the GTL, it just doesn’t immediately put you in that frame of mind.

The 1,649cc, transverse, six-cylinder engine employs a similar valve train to that of the K1300s, but that’s it. It’s an all-new engine intended to adapt the traditional benefits of BMW’s luxury performance cars to a new flagship touring bike. Extreme care has been taken in packaging that engine so its size and configuration doesn’t negatively affect the bike’s dynamics or ergonomics. Tilted forward at 55 degrees, the frame passes over, rather than around the 22-inch width and making the whole bike surprisingly slim.

Every aspect of the engine has received extreme attention to detail. It uses a dry sump so it can sit as low as possible, dropping the center of gravity; the cylinder sleeves only sit 5mm apart, making that slimness possible; the gearbox is a triple stack design, making it incredibly thin too. It also uses a level of equipment normally seen only on exotic superbikes — the valve and clutch covers are magnesium, for example. The whole thing, with the clutch, gearbox and alternator, weighs just 226lbs.

This is the first motorcycle engine in the world to adopt a throttle which is 100 percent ride-by-wire. Other bikes employ a backup mechanical cable to close the throttle in emergencies.

With the electronically adjustable suspension set to “Sport” and the traction control, wheelie control and throttle response set to “Dynamic” the GTL really hustles. It steers very quickly, drops into corners and holds its line. Need to tighten it? Even with the pegs down, just at tiny amount of pressure on the inside bar dials in more lean. Roll on the throttle and you can be confident the rear wheel will stay in line as the huge spread of torque shoves you out of the corner. Note that none of that is couched with “for a tourer” or “surprising for such a large bike.” This is a fast motorcycle, irrespective of weight, size, category or expectations. No excuses are necessary.

Even feel — something traditionally absent from large motorcycles and problematic on ones with alternative front suspension — is extremely good. Riding the K1600, the front and rear tires are able to communicate what they’re doing to you in an immediate, intimate way normally reserved for sportsbikes. You can feel the difference between pavement and tar snake as each wheel passes over it, the rear wheel squiggling a little bit if you’re on the power.

You control most of the ancillary functions through buttons on the bars, a rotating, clicking wheel BMW’s not calling iDrive and a bright, clear, high-resolution 5.7-inch, full-color TFT display. The touch-screen Garmin sat/nav sits higher in the binnacle in order to be closer to your normal line of sight.

Initially there’s an awful lot of options to get your head around and initially it’s all a bit overwhelming. The multi controller wheel doesn’t help there. It spins up and down and clicks either left or right, combining with a separate “menu” button to scroll through all the available screens and options. Making this level of information and control intuitive is an enormous task and BMW hasn’t totally succeeded at it. Like iDrive, the multi-controller is intended to allow you to operate the system without looking down, but also like iDrive it’s confusing and prone to heading down menu trees you didn’t ask it to. I repeatedly found myself trying to turn down the stereo volume and instead resetting the oil change service intervals. Having said that, there probably isn’t a better or simpler way to control such a ridiculous number of functions. iDrive remains a good example, where that car system was traditionally panned by reviewers who only ever experienced it for hours or days at a time, owners operating it in the long term where able to learn to operate it easily after spending weeks and months with it.

The electronically adjustable suspension — operated through the multi-controller, so best accessed at a stand still — and switchable riding modes — thankfully a separate button on the right bar — bring very noticeable differences to the riding experience. But where you’ll want to alter the throttle response according to conditions — rain, road and dynamic modes do what they say on the tin — the suspension is best left in sport, which is still comfy, but the firmer damping actually aids straight line stability and just general confidence in the motorcycle.

It may sound a bit ludicrous for a large touring bike to come with the same performance-enhancing, lean angle-detecting traction control system as the S1000RR, but that plays back into the whole idea that this isn’t your grandpa’s Goldwing. Having it there boosts confidence while cornering and works seamlessly — in dynamic mode it allows just enough of a slide to let you know you’re trying a bit hard, reigning the bike in without spoiling the fun.

As sort of a demonstration of the slick level of integration seen throughout this bike, there’s a button on the handlebars that can lock and unlock all five storage compartments (on the GTL, the GT doesn’t have a top box), including the little pocket in the fairing that’ll fit your iPhone in a foam slot specifically designed for it. I did mention the full iPhone/iPod integration that allows you to control the phone and your music through the multi-controller, charges the device and can beam separate phone calls and audio into the Bluetooth-equipped helmets of passenger and rider, right?

Light is projected 90-degrees upwards onto a mirror that can rotate side-to-side and up and down. Using the traction control’s lean angle sensor, it does that as the bike leans, dives under braking (there’s very little dive thanks to the Duolever front suspension) and squats under acceleration, keeping the headlight beam level and pointing as far ahead as possible at all times. That also means the light adjusts to point into corners.

That’s a lot of technology delivering a result that’s so seamless, it feels unremarkable. You simply end up wondering why all bikes don’t work like this. The light adjustment takes place constantly and instantaneously, illuminating the road ahead the most effective possible way. You don’t so much see the light rotating, as the illumination just stays where you’re looking. So far as technology working as advertised, this is as good as it gets.

The 1,649cc capacity and all those cylinders don’t add up to a shocking level of acceleration. Instead, the straight-six is more about flexibility and smoothness than it is out and out power.

Neither model has a screen that fits me. All the way down, they’re just high enough to interupt vision, while all the way up, looking through two sheets of plastic (visor and screen) feels weird and there’s a curious amount of forward pressure against your back and helmet as the air curls back against you. I’d actually play with the three levels of optional seat heigh available at no-cost from dealers before fitting a different screen. All the bikes BMW made available were on the middle setting and I should probably have had the tallest seat.

There’s also some odd vagueness at walking speeds that can make parking and other slow maneuvers challenging. This could be due to the Duolever, Hossack-style front suspension which employs a single monoshock on a double trailing-link design, but more probably it’s just the only time the actual weight of the motorcycle can be felt. You really do forget these are 700+ lbs motorcycles once you get up to road speed. Plan your footing and you’ll be fine.

The GT competes with (admittedly less expensive) bikes like the Kawasaki Concours 14 and Yamaha FJR1300, absolutely blowing them away with its handling, flexible engine performance, quality and feature content. But, the GTL will also out handle and outperform either of those, with a full-size adult reclining on the back rest in complete comfort. There’s just nothing else on the market that’s even close and the capability of both motorcycles is so broad that they defy any existing category.

A full-dress tourer that’s almost as involving to ride on the road as a superbike? I dunno, let’s call it a Supertourer or something.