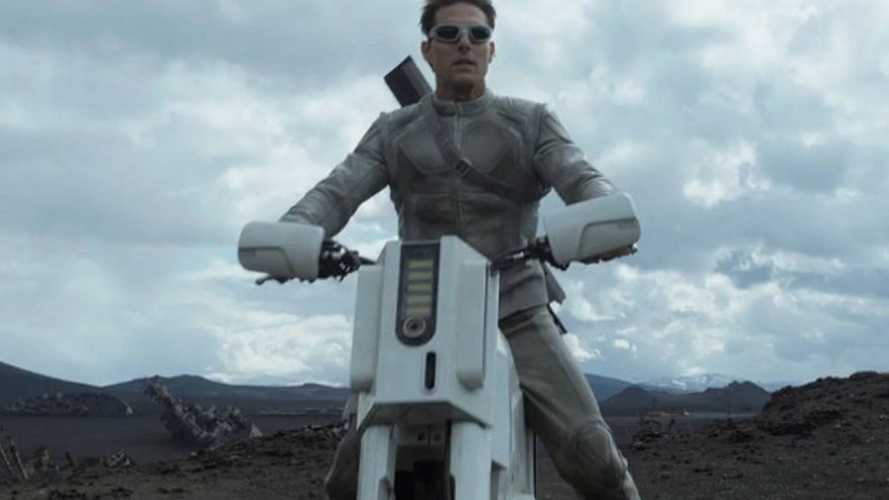 Suspend Your Disbelief: Oblivion"60 years ago Earth was attacked, we won the war, but they destroyed half the planet. Everyone has been evacuated,...

"60 years ago Earth was attacked, we won the war, but they destroyed half the planet. Everyone has been evacuated, nothing human remains." — Jack Harper

Oblivion is a science-fiction film based on Joseph Kosinski's unpublished graphic novel of the same name. The film takes places 60 years after an alien invasion that destroyed half the planet and shattered the moon.It stars Tom Cruise, Morgan Freeman, Nikolaj Coster-Waldau and Olga Kurylenko. And a neat looking electric dirt bike.

Tom Cruise plays Jack Harper a soldier on Sky Tower 49 whose mission is to repair automated drones that hunt down and destroy the left over aliens from the war. To complete his mission, he has an array of vehicles that aid him in getting to and from the drones. One of these is a flying Bubble Ship and some kind of futuristic electric or hydrogen-powered motorcycle.

Tom Cruise with a dummy for a passenger.

The bike appears to be some futuristic electric or hydrogen powered motorcycle that is used to traverse the shattered landscape. It looks like a cross between a Brammo Enertia and a Kawasaki KLR.

As we can see from the pictures and video, it's just a dirtbike covered in fancy plastic with a dummy on the back. From the looks of the swingarm and the brake caliper it appears to be a Kawasaki KLX250S, correct us if we're wrong.

Interestingly, out go the dual-sports rugged, spoked wheels in favor of cast, 17-inch road items complete with tubeless knobbies. This was likely a props department decision to contribute to the futuristic look that's elsewhere achieved by a whole bunch o' white plastic.

Jack Harper is a soldier who happens to be fascinated by Earth culture from before the invasion — he even stores items he finds on missions near a cabin on a lake. He seems to be a capable individual, fit to be a soldier. Being played by Tom Cruise, he is at it again with his motorcycle riding — traveling vast distances this time.

Jack Harper riding across the landscape.

Like you, all we've seen is the trailer, but it shows Tom using the bike to traverse fire road-like conditions. No ridiculously unbelievable jumps or unrealistic stunts so far, but judging by Cruise's previous films, there's going to be at least some of that.

An electric whir has been dubbed over the KLX250's muted four-stroke sound track.

Electric, hydrogen fuel cell or whatever, the bike is used in an absolutely believable manner, at least so far. Mr Cruise should probably put a helmet on, but otherwise simply cruising around, covering some distance off-road is, well, what dual sports do. If, in the movie, there's suddenly some 50 foot jump or upside down power slide...well that stuff only happens in movies.

We don't really know much about what Tom Cruise and this bike are doing in Oblivion, we'll update this article as new information comes. The movie comes out April 19, 2013.