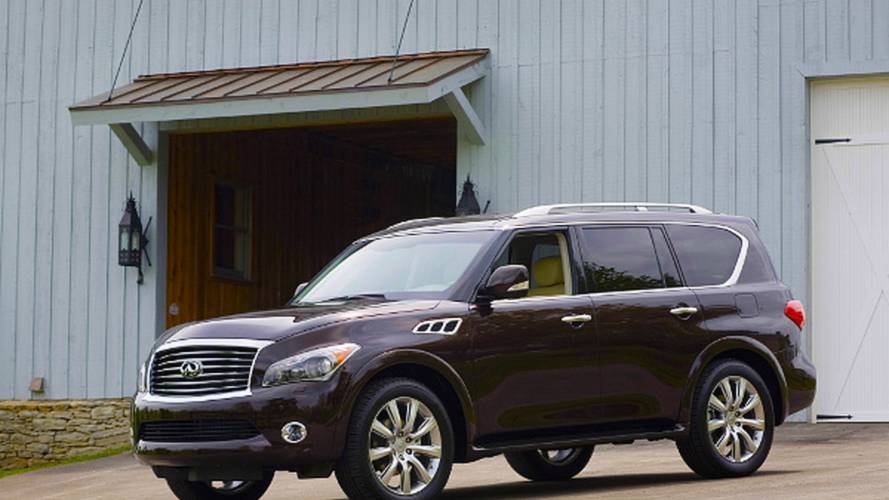 DriveApart Review: 2013 Infiniti QX56RideApart Overview For 2013, the Infiniti QX56 enters the third year of production in its present iteration....

For 2013, the Infiniti QX56 enters the third year of production in its present iteration. The QX56 is equipped with all the power, safety and technology and luxury you'd expect out of a luxury liner-sized SUV that can seat 8 passengers comfortably and still have room to haul whatever you'd need.

There's a lot to like about the 2013 Infiniti QX56 especially under the hood with its high power engine mated to a smooth 7-speed transmission. The interior is amazingly comfortable and decked-out in leather with driver centered console that has a 8 inch WVGA color touch screen. For 2013, auto-dimming exterior mirrors have became standard and there's addition of the Moving Object Detection system that has been added to the Around View Monitor. Using cameras this system allows the driver to become aware of moving objects when pulling out of a parking space or moving in reverse.

There isn't much to like about the Infiniti QX56, but you'd hoping the gas mileage would be higher especially with rising gas prices these days and the price tag a bit lower.

Lots of cargo room in the QX.

When properly equipped, the QX56 has a towing capacity of 8500 for both its 2WD and 4WD models. With that much towing capacity you could tow another QX56 and still have room for a trailer and a pair of motorcycles. With towing capacity in that range you'll never have to worry about your tow weight. The interior cargo space only starts with 16.6 cubic feet but expands to 49.6 cubic feet and 95.1 cubic feet with the second and third row seats down. With that kind of cargo volume, you'll be able to carry all your groceries, a 70" inch flat screen TV and a dog.

We liked the way the QX56 drove, especially with the tried and true 400 horsepower, 5.6-liter V8 under the hood. While its stable mate, the new Infiniti JX made us wish for a little more power, the QX craves the bigger mill, as this is a large SUV. The QX56’s ride is compliant and doesn’t have the bobble you’d expect from such a large SUV. This is due to the high-stiffness frame structure that enhances the ride of the vehicle while simultaneously reducing noise, vibration and road harshness, a big bonus if you’re on a dirt road or cruising along potholed streets. We drove both the front-wheel and all-wheel drive models and in front-wheel guise, the QX56 is fine for tooling around town, but hit any bad weather and you’d be wishing for all-wheel drive. While the size may fool you from the outside, when you’re in the driver’s seat the QX is B-I-G and drives like the big SUV it is.

The car is equipped with a 5.6 liter V8 that kicks out 400 horsepower and 413 ft-lb of torque. The engine comes with Infiniti's VVEL (Variable Valve Event & Lift) technology and Direct Injection Gasoline (DIG) system that enhances throttle response, improves fuel economy and emissions reductions and gives the engine more better injection control. The QX56 has a 7 speed automatic transmission with Adaptive Shift Control (ASC) and a manual shifting mode with Downshift Rev Matching (DRM). The 4WD is Infiniti's All-Mode 4WD system with 4L, 4H, and Auto modes. The system can distribute torque across all four wheels to help enhance traction in the dirt. All of the QX models come with Hill Start Assist that keeps the QX56 stationary when the vehicle stops on a slope.

The QX comes with a whole slew of interesting features like your Lane Departure Warning and Lane Departure Prevention systems. The QX uses cameras to detect whether the vehicle is exiting its lane and notifies the driver of the situation with an audible beep. The Blind Spot Warning and Blind Spot Intervention uses cameras as well to warn the driver if there is a vehicle in its the driver's lane will brake for the driver if there is a vehicle detected in the blind spot. The QX56 also comes with Intelligent Cruise Control which uses lasers to maintain a following distance while using cruise control. This system will automatically brake and speed up to remain within the set following distance.

The QX56 has a fuel economy of 14 mpg city and 20 mpg highway and combined mpg of 20. Now while this isn't your Prius's gas mileage, its somewhat impressive for a 8 passenger 5.6 L V8 that weighs nearly 3 tons. Could Infiniti do better? They'll need to in the future.

The interior is what you would expect out of a luxury SUV, all leather across the entire vehicle and seats as comfortable as the couch in your living room. There is a 8 inch color touch screen display that is located in the center console that is powered by the Infiniti Controller so you can see vehicle information systems and control convenience and comfort features. It comes with real-time traffic information, real time weather with a hands free bluetooth system.

The exterior still has that bold QX design and shape that screams power and strength — while still being able to hold the viewers' attention. Some of the exterior features include — roof rails, a power rear lift gate, splashguards built into the wheel articles, courtesy lights, power sliding tinted glass moonroof, LED taillights and integrated turn signals. The QX is available with 20 inch 7 spoke aluminum alloy wheels or 22 inch 9 spoke forged aluminum wheels for 2013.

The QX in motion.

The Infiniti QX56 embodies what you’d expect from a luxury SUV in 2013 – everything is luxurious and works beyond expectations, the SUV is precise in its handling and the ride is velvety smooth. Will it take you up the side of a mountain and on an off-road safari through the worst roads in the world? Not really. But it’s not made for that, if you want something big and beautiful and are looking for a Country Club type of drive that can tow your boat to the river or a few quads to the trail while still being comfortable, the 2013 Infiniti QX56 is the SUV for you.