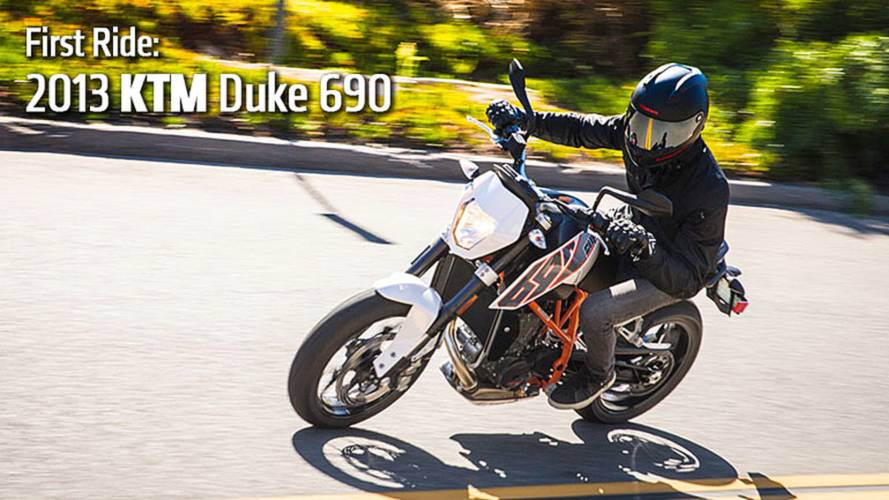 With only a single-cylinder and weighing just 337 lbs, the 2013 KTM Duke 690 is more fun to ride in realistic street conditions.

Bigger isn’t always better. With only a single-cylinder and weighing just 337 lbs, this little roadster from Austria falls behind the specs of most modern sport bikes. But that’s also what makes it more fun to ride in realistic street conditions. Find out why in this 2013 KTM Duke 690 review.

Think of the Duke as a fun street bike that learns its lessons from KTM’s off-road history. The single-cylinder motor is very slim and very light, while the spaced-out explosions deliver power to the rear wheel with an even beat that helps the tire find traction. Little here is frivolous, there’s just a basic steel trellis frame, high quality suspension and a set of flat bars.

For 2013, the Duke’s been comprehensively updated, both to improve performance while working to keep it compliant with impending emissions standards. The re-worked fueling, dual spark plugs and ride-by-wire throttle improve fuel economy by a claimed 10 percent and, usefully, service intervals increase to 6,000 miles — unheard of for a single.

While this Duke is actually a little bit shorter — the wheelbase shrinks from 57.7 to 57.4 inches and the seat height is decreased from 32.9 to 32.7 inches — it’s also a little heavier. Blame the exhaust for increasing weight from 330 to 337 lbs.

Other additions to what KTM claims is a “90 percent new” model include standard ABS, altered cylinder heads and new suspension which, as with most KTMs, is made by WP.

As some of you may already know, MLB Angels pitcher CJ Wilson is a friend of RideApart. What you may not know is that the avid motorsports enthusiast also owns a number of car and motorcycle dealerships. He was kind enough to provide the Duke 690 for this review.

CJ and I spent a day riding and shooting the photos you see here. He then let me ride the bike for a week while he flew to England to test his new McLaren P1 on the Top Gear Test Track. Call that one good Karma for hooking up the bike for RideApart.

CJ lives in the Southern California coastal town of Laguna Beach, an area full of beautiful hills and perfect pavement. The road to the lookout called, “Top Of The World,” has three perfect curves. While it’s actually only a two-lane road, it’s as wide as four. The Duke’s incredibly fast steering made the tight transitions between those turns effortless. I didn’t realize how much so until I hopped on an S 1000 RR and was forced to work much harder for the same pace on the same road.

The same goes for lane splitting through congested traffic, where the Duke simply feels invincible. Not only is it slim and light, with an upright seat position, but the ABS brakes are also incredibly confidence inspiring. Handy when one of the throngs of expense Urban Assault Vehicles cuts you off.

The Duke’s motor produces just 69 bhp at 7,500 rpm, but making 52 lb.-ft. of torque at 5,500 rpm. It’s torquier than a 600, with both peak power and torque arriving much, much sooner. That makes firing it through gaps in traffic easy and immediate.

During the week that I spent on the Duke, I used it like I would any other bike. Trips from Long Beach to LA on the highway to visit my girlfriend or RideApart’s Wes Siler (who aren’t the same person, believe it or not), trips around town and through the SoCal canyons. Getting on the bike became an event I looked forward to all day, a feeling that was only rivaled by my desire to get off of it.

There is no bike more deserving of the “scalpel” cliché than the Duke 690. It is an unbelievably sharp tool, but also a specialized one.

The Duke 690 is most at home on a windy canyon road or ripping around city streets. It feels even lighter than its already impressive 337 lbs (wet) weight suggests.

The low weight paired with the strong torque leads to big wheelies and very strong acceleration through reasonable speeds.

Street bike riders will be shocked by how fast the Duke changes direction. You have to reprogram your brain to suit, forcing yourself to turn much later than you would on a full-on sportbike.

Above 3,000 rpm, the engine is smooth and predictable. But, below that point, the engine shudders and the fueling is surprisingly jerky. We also experienced false neutrals, especially between 5th and 6th gears.

Despite the new balancer shaft, vibrations remain a huge issue on the Duke. You’ll be miserable after merging onto the freeway and maintaining a constant speed. All of my limbs were asleep 20 minutes into any freeway ride.

“The WP suspension strikes a good balance between performance and comfort with abundant cornering clearance.” – CycleWorld

“From the first moment you let the clutch out and roll on the throttle, you can almost hear that whisper in your ear coaxing you: ‘Come on, do it . . . no one is looking . . . I won’t tell.’” – MotorcycleMojo

The 2013 KTM Duke 690 retails for $8,999, which is $1,900 cheaper than it’s previous iteration. The Triumph Street Triple starts at $9,399, while the Yamaha FZ-09 costs just $7,999. The low price on the Yamaha is really tough to beat, especially when you consider it would be far more comfortable at longer ranges, however it would need a substantial amount of work to be as nearly as capable as the KTM in the canyons.

The KTM Duke 690 would be a perfect motorcycle, but only if your life fits its exact purpose and never varies outside its performance envelope. Do you live in a house at the bottom of a great twisty road? Do you only ride through the city, without ever getting on the freeway? If so, the Duke is the best bike you can own. If not, you’ll need something with more varied capability as your full-time ride.