8 Ways Being a Motorcyclist in Canada is Different 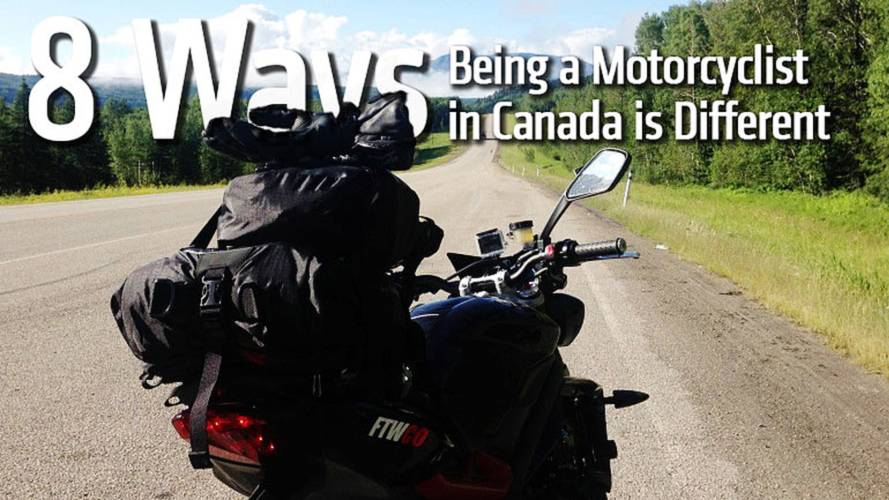 Canada is bigger than the U.S. with the population smaller than California. Here are 8 ways being a motorcyclist in Canada is different.

In spite of longer winters, Canadians riders are die-hards. We’ll truck our bikes down to California and Tennessee just to get a little extra riding in during the off-season. Some of us ride until the snow flies, and then a few more miles after that, just for good measure. Read on to learn more about riding north of the 49th Parallel.

The epicenter of many of the best things about riding is far, far south of the border for most Canadians. Provinces with the most engaging roads (such as Ontario, British Columbia) are also the least likely to tolerate our exploiting them for sporting purposes. And forget lane-splitting, that guy on Vancouver Island helped ruin it for everyone a couple of years ago.

The fastest that you’re allowed to drive on Canadian expressways (freeways) is 110 km/h (68.35 mph). Ontario, Quebec, and Newfoundland and Labrador have a maximum of only 100km/h. There has been pressure to join the rest of the developed world, as these speeds have been the same since the 1970’s oil crisis, but no changes have been made yet.

Depending on your age, driving history, marital status, the displacement and style of your bike, insurance can vary heavily. Sport bike riders can expect their fully-faired steeds to land them on the blacklist, paying exorbitant fees because of the risk associated with their preferred type of bike. The same goes for most bikes over 1000cc, regardless of their horsepower output. For example, I pay less for insurance on my Street Triple R than my friend with the same displacement Daytona 675.

In colder climates, freezing and thawing water on the roads quickly turns city streets into something out of a post-apocalyptic movie. Many of us are turning toward the plushness of touring cruisers, adventure tour and dual sport bikes as primary or secondary mounts, as the plush suspension gives our kidneys and backs a break while crews patch or pave in the summer. Frost heaves add an extra level of difficulty during highway travel, too.

Most provinces have the same joke: we have two seasons, winter and road work.  Touring in Canada usually means hitting some kind of road construction. Relieving your pride and joy of tar and crud is just another part of the come-down from a good tour. Smart folks step away from the pressure washer, and buy a bottle of Castrol Super-Clean and a few brushes for cleaning.

We’ve been doing this since the 1960’s and we have had fewer motorcycle deaths because of it. Regulations for Canadian helmets follow the same standard as American DOT standard. British Columbia finally outlawed skid lids, the shortest of "shorty" style helmets in 2012.

How are we ever going to compete? Since companies like Revzilla can’t ship all of their products across the border, some good folks in Quebec and British Columbia found a not-so-niche market in reasonable prices and shipping. Hopefully the rest of the industry chooses to catch up.

We have the rough stuff in droves. Our country is bigger than the U.S., and our population is less than California’s. That means there are some real untouched gems out here. Are you living on the East Coast and have an itch for something remote? I’d tell you to head for Newfoundland and Labrador, if you’ve got the grit. Riding an ADV bike or Dual Sport in British Columbia? Welcome to heaven, logging and mining roads are everywhere.

For all the cross-border riders out there, what other differences have you have noticed?