Shinya Kimura: A Sparrow and A Bare Branch 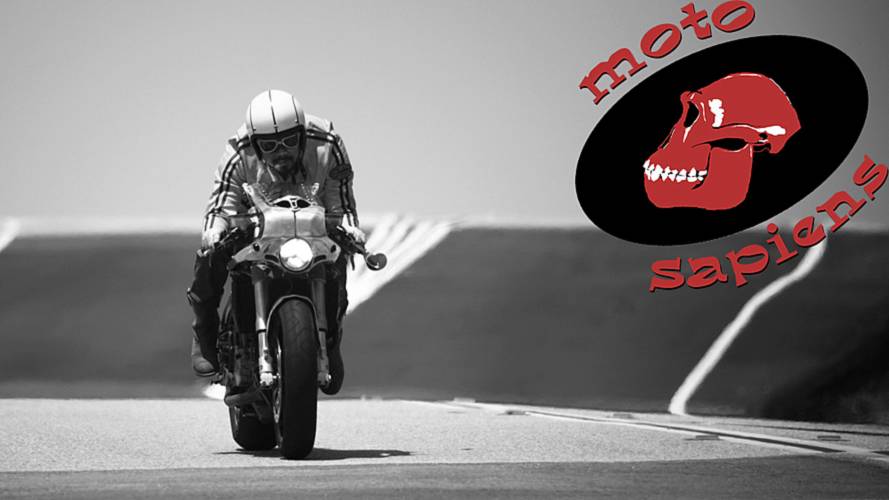 "I swear I’ve never tried hard to make it look like art," claims custom bike builder Shinya Kimura. Yet, that's exactly what he ends up producing.

"I swear I’ve never tried hard to make it look like art," claims custom bike builder Shinya Kimura. Yet, that's exactly what he ends up producing. I would make the case that his bikes are metaphysical statements about the relationship of man, nature, work, materials, and speed. I recently asked him several questions about his process, and I think his answers helped me understand his work a little better. I would like to share some of these insights and draw parallels to some other Japanese and Japanese-American artists who are considered the finest in their respective fields. I hope this will create a new perspective around his work.

Forget about the '60s and '70s. The golden age of the custom motorcycle is right now. There are more people pouring more time, talent, and treasure into phenomenal custom bikes today than ever before. There’s certainly enough to keep BikeEXIF and Pipeburn easily supplied with daily doses of hellyeah. New styles are being invented faster than we can name them, and classic styles are being kitbashed into what Chuck Darwin would call “endless forms most fucking awesome.”

There is the meticulous craftsmanship of Falcon, The GasBox, or Mule Motorcycles. The raw, rough, ready beauty of Blitz, Cafe Racer Dreams, or Hammarhead. The hip rolling swag of Deus or Wrenchmonkees. No-shit ass-kicking like Dime City Cycles and Choppahead. You know I could go on and on. And on. You surely have your own favorites. And on.

Shinya Kimura, however, is in a different category. I don’t just mean he’s totally the best, man. I mean this is the first person who takes the craft of custom bike building into the realm of serious fine art. The art world doesn’t know it yet, and Shinya might not put it that way himself, but I would make the case that his bikes are metaphysical statements about the relationship of man, nature, work, materials, and speed. I recently asked him several questions about his process, and I think his answers helped me understand his work a little better. I would like to share some of these insights and draw parallels to some other Japanese and Japanese-American artists who are considered the finest in their respective fields. I hope this will create a new perspective around his work.

“I swear I’ve never tried hard to make it look like art,” he says. The final product seems to be a natural, even inevitable, outgrowth of his process, rather than explicit attempts at art. He believes “every motorcycle has intrinsic artistic quality,” and his role is to find and extract that quality and redesign it with the particular rider in mind.

The words “flow” and “balance” came up a lot in his discussion, as in when he talks about trying to “digest and bring forth the new design from my brain and soul trying to make the absolute flow as a whole.” (Much of his writing seems very poetic (perhaps unintentionally) and bears re-reading or even reading aloud.) This makes me think of the mental state of flow, that perfect, focused, relaxed alertness of an intense experience. The bike, the composition as a whole, is a physical statement of that feeling. It is unity.

The “balance” is an overall composition, a relation between parts and the whole, and the intersection of the engineering and aesthetic sides of design. He mentions that he admires Hiroshige and Hokusai, the great 18th-19th century masters of Japanese printmaking, for their use of space and “ideal balances and flow in their work.” Both used asymmetrical positive and negative space to create harmony on the page. They used abstractions of natural scenes in ways that look quite modern and were revolutionary at the time. The balance of part to whole is equally important: “...I’m trying to make every single part in harmony as a whole, and not just one part jumps out at me when I step back and look at my motorcycle. To me, detail is for the whole and it should not be the eye-catcher.” He says, “There are no romantic delusions or maudlin sentiment in engineering work,” but this must balance the creative side, where he has “some big toy boxes in head.”

I and others have observed that his work seems to have an aesthetic of “wabi-sabi,” the Japanese aesthetic tradition that embraces imperfection and transience. I asked him about this. He observes that a motorcycle is intrinsically imperfect – or at least incomplete – without a rider. “It is more like knives or fire, more primitive as a tool.” He speaks of a motorcycle’s “vulnerability,” and that this is “fundamental to the fascination of the motorcycle.” This is one sort of “imperfection;” another are the marks left by fabrication. Here is how he describes the touch of the maker:

"When making a tank by hammering out a sheet of aluminum, how evenly smooth you make the surface has a major effect on the impression of the completed work. Many people may get the impression of imperfection by seeing hammering marks or grinding marks among the motorcycles I make but it’s my touch, neither more nor less. However, that’s no excuse for deficiency of skills. 'Touch' and 'lacking skills' are totally different."

He is not trying to make wabi-sabi, saying essentially that if you’re trying to do that, it’s not that anymore, anyway. I guess it is like, that which is true cannot be spoken, and that which can be spoken is not the truth. Maybe I’m stretching it there, but he concludes this section by stating, “I do have an intention to choose, let’s say, a picture of ‘a sparrow and a bare branch solitary painted in a corner of a big white canvas’ over a picture of ‘many dolphins filling up the canvas’. Oh, but this is nothing to do with wabi-sabi, though...” Doesn’t it? I honestly don’t know.

I do know that he works in a very direct, honest way, drawing the design from the nature of the materials, the rider/customer, the engine, and probably from his study of entomology in college. Though he may not be mimicking natural shapes specifically, it is the essential quality of Nature (which includes engineering) that lends the balance and flow. It is the unification of metal, man, and movement.

I’d like to consider a few artists who I feel have a similar ethos, and pin Kimura’s name on the wall with them.

Isamu Noguchi (1904-1988) is justly regarded as one of the greatest sculptors of the 20th century. He worked in many different materials and I guess what you’d call different styles, but he was a classical Modernist. Look at the “touch” of the artist in his work “Becoming.” You see the hammer marks, but also the polished, finished form starting to come through. You can feel the softness of the marble, and you sense that he would handle, say, granite or wood differently. Michelangelo talked of his sculptures “emerging” from the stone, and this sculpture is reminiscent of Michelangelo’s later work, which is rough, brutal, seemingly half-finished. The shape that is emerging in “Becoming” is not a Madonna, but a simple, Modern shape, but even the “unfinished” portion is beautifully and carefully formed. Nothing is random here. It seems it is what the marble inevitably had to be. There is a balance between the organic stone exterior and clean, straight lines embedded within.

Toshiko Takaezu (1922-2011) was a ceramicist known for expressive, abstract vessels, some small, some quite large, some functional, some not. Consider this vessel called “White Peach.” You can feel the viscosity of the clay and the fluidity of the glaze. Her pieces are contemplative, seemingly weightless. These, too, have been described as “wabi-sabi,” sometimes showing more of the character of a boulder than “fine ceramics.” This is a Modernism that knows ancient history and is disciplined and trained. Her work is intentionally Zen and emulating Nature. You see in the form the stroke of her hand, an instant’s movement informed by a lifetime of study. This, as much as any artwork, is a search for unspeakable honesty.

Last, I would like to mention Masahiko Kimura (born 1940). No relation to Shinya, Masahiko is a world-renowned bonsai master and is crediting with taking the craft of bonsai into a full sculptural art. He transformed what is conceivable in the world of bonsai. Look at the juniper trees in the linked article. These breathtakingly gnarly, twisted shapes were revolutionary. The wild, deeply carved deadwood creates intense three-dimensionality. For an ancient, classical art with highly established rules, this makes an entirely new aesthetic. These are meditations on both the beauty of transience and the tenacity of life – that living thread of green on the massive dead driftwood. They create incredible negative spaces, like a Hiroshige print in 3-D. They are executed with the minutest detail serving a completely wild, but totally unified compositional whole. I can think of no other artwork that so utterly embodies “balance” and “flow.”

I put these examples out there without trying to draw too many explicit parallels between these artists and the motorcycles of Shinya Kimura, but you will immediately see certain obvious connections. It’s not that Noguchi’s stone carving looks just like a Kimura gas tank, but that there is a conversation you can imagine between the two. They are talking about some of the same things. The more you look at the works of these four artists, the more you will see the affinities and differences. Art is a discussion that happens over centuries, and really great art still speaks generations later. As Toshiko Takaezu said, “An artist is a poet in his or her own medium. And when an artist produces a good piece, that work has mystery, and unsaid quality; it is alive.”

Should Shinya’s bikes be in a museum? I imagine he would resist that. The sound and the motion are equally important, as he noted when talking about his experience in the Motorcycle Cannonball, and you don’t get that in a museum. The bike would be incomplete without its rider. It would be half-alive. They must be ridden. Still, I say a few examples should be preserved in museums alongside the great artists of our era. This work is on a level of quality that is absolutely worthy of the Museum of Modern Art. Something real is being said in its unsaid way. It will be a worthy inspiration for the the next generation’s artists.