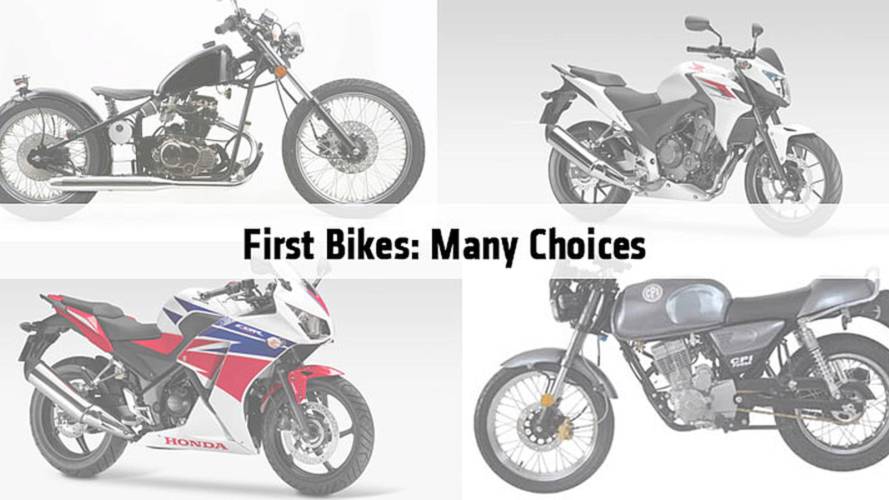 It used to be that an “entry-level” bike was simply a cheap used bikes to master the “friction zone.” Today, there are many choices for the first bikes.

Small bikes are back, and it’s a beautiful thing.  We’ve all seen the spy photos of the 2015 Triumph Daytona 250.  This is a new market segment for Triumph and an acknowledgement of the growing trend for well-made, well-engineered, small-displacement bikes.  The Hinckley quart will join the ranks of the Honda CBR300R and CB500F and the Kawasakis Ninja 300 and, of course, the CCW Heist and Misfit, as affordable, entry-level bikes that are fun to ride.

It used to be that an “entry-level” bike was simply a cheap used bike that you didn’t mind dropping a few times while you learned to master the “friction zone.”  You were forced to look like a dork for awhile as you lacked the skills and cash for something newer.  You also had to learn to wrench a bit, because invariably those used bikes had issues and emotional baggage that prevented them from truly opening up to you.

Today’s crop of smaller bikes takes away much of the heartache and awkwardness by offering something that is highly reliable and up to modern standards of manufacture.  You can get on and just start riding – you get the benefits right away.  On top of that, these bikes are actually cool.  You can actually look good in your first summer on two wheels.  They are welcoming, and they tear down what marketers call “barriers to entry.”

Of course, the option to buy a used beater bike is still available.  And since dorky is cool, that option may have some cachet of its own.  There is also something to be said for the street cred of riding something that is older (and less reliable) than you are.  You know, something with carburetors.  Something with “patina.”  That beater bike will give you a schooling.  You can ride a new bike without really understanding how it works, but a used bike will soon become a static sculpture if you’re not interested in tinkering.

We hear that millennials don’t want to know what’s under the hood – they just want the technology to work flawlessly.  I don’t think that’s universally true.  There are plenty of young people who are eager to solve problems and don’t subscribe to the sanitized lifestyle.  They are looking for authenticity, however we may each define that.

It’s easy for an old smudgepot to say you have to be a mechanic to ride.  It’s somehow a moral obligation to tear it apart and to own several arcane, single-use tools that can only be purchased from obscure catalogs and paid for in pounds sterling.  Fact is, that’s not the case anymore.  Yes, you need to understand the basics, but you don’t need to be able to do a ring job on the side of the road.

So the choice is yours: do you want to pick up a shiny, hot little bike and just go, or do you enjoy the challenge of something that needs some love?  I choose the latter, but that’s because I love working on the machine, not because I have a Puritanical need for guilt and penance.  Luckily, this isn’t the 1950s, and so if you want something that just delivers the fun, you have more options today than ever before, and like I said, that’s a beautiful thing.