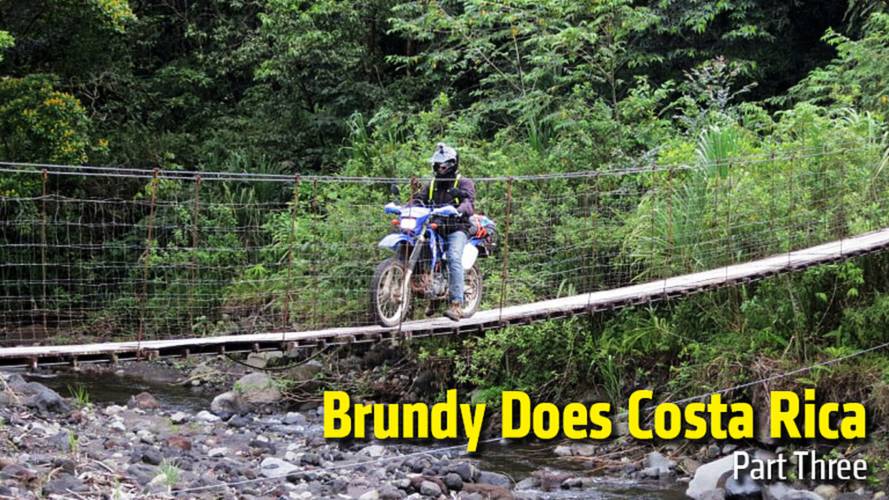 Read part three of our epic motorcycle ride through the wilds of Costa Rica.

As we know, all good things come to an end, so the high we felt the day before was due to expire. And as expected, literally on the way out of the hotel’s driveway I picked up a nail, and was sliding all over the place for a few hundred yards before admitting to myself I had a flat.

Having changed plenty of flats in my day I felt prepared, and with Thorsten’s tools that he gave us along with our spare tubes, I figured we’d lose an hour, max. That’s when I realized Thorsten gave me everything except anything to pump the tire back up with.

I tracked down a local guy loitering around the hotel, his name was William and was very proud that he had an American name, and he tracked down a hand pump for us from one of his buddies who lived about a mile away. Armed with air and tools, we set about taking the rear wheel off, only to find that we were short an important item, tire irons.

After working on the tire with wrenches, sticks, and a claw hammer, for the better part of 90 minutes, we admitted defeat and set about putting the flat tire on with the plan of riding on the flat the 90 minutes to the next town large enough to have a Llantera (which Google literally translates as “sobbing” but is actually a tire-changing-shop, connection, maybe?). Ten miles in, the tube started coming out from under the tire and was about to get itself wrapped in the sprocket by the time we noticed. Officially defeated, we flagged down a truck, loaded the bike in the back, and resorted to wait until someone with the right tools could tear into my rear wheel.

With about 3-1/2 hours lost after all was said and done, there was no way we’d be able to complete the long day of off-road we had planned. We had to adjust and slab it counter-clockwise from Turrialba all the way around the Braulio Carrillo National Park to La Virgen, a town known amongst river rafters, or so we were told, as we didn’t see any - conclusive evidence that Lonely Planet doesn’t actually visit all of the towns that they write about. We found a hotel comprised of 7 cabinas that Lonely Planet referred to as “darn cute”, which is absolutely false. I mean, the quarter-sized black bug with antlers that I awoke to on my chest was pretty darn cute, and the cockroach had a pretty good vibe, along with the myriad other bugs, but the rooms themselves left a lot to be desired (like proper air conditioning). It was a transit town though and was a meager $10 per night, so while it was very easy to complain about, you definitely get what you pay for.

Sleep came slowly this night, as I eagerly awaited a day of redemption.

When we awoke to rain for the first time on the trip, it was no surprise given how poorly our decision to stay in La Virgen had turned out. But with a hearty breakfast in our bellies and our rain suits on our backs, we were ready to get out of town and head back out into the sticks as fast as possible.

Having traveled countless dirt roads thus far that would have gone from challenging to impassable in the rain, we considered skipping the off road sections planned for the day and just slabbing it to El Castillo where we’d heard great things about a hotel. Within 15 minutes of leaving town, the clouds broke and decided to leave us alone for the remainder of the day and with that we regrouped and headed off the paved highway.

This road, heading north off the highway out of La Virgen towards Carrizal quickly degenerated into one of the roughest, least trodden tracks of the trip and steadily got worse and worse the further into it we traveled. The track was only about 2 miles long between the two towns we were connecting, but it took us well over an hour to get through. The toughest parts of the track consisted of 10 small rivers that ran perpendicular to the track which had rocky bottoms and the thickest, tackiest mud at the river banks that we’d experienced on the trip. We would inch our way down into the river, pick our way through from rock to rock, then give the bike every bit of gas it had trying to climb back out of the bank, spinning the wheel about 99.9% of the time, and literally working our way out inch by inch. I’ve ridden in some thick mud before but this stuff was insane, and the dual sport tires probably weren’t helping much under the circumstances.

We’d made it through half of the crossings when we came up on a herd of 10 or so of the laziest/potentially most aggressive cows ever to walk the planet. They were all black, which was strange, and didn’t have the same hair as normal cows do, but were smooth looking and had what looked like deflated horns laying down like a hipster’s comb-over. Where most docile cows see you coming and scramble to the side of the road, these guys held their ground and weren’t in any rush to get out of our way. The biggest of which even made a subtle move towards me, which freaked me out a bit. Meanwhile I had Mike laughing in the intercom calling me out for being afraid of some cows, but after a quick Google search, they looked more like water buffalo than they did cows.

Once up in the mountains outside Arenal National Park, we had a decision to make: if we went south around Lake Arenal to the town of El Castillo and the widow-maker river that Thorsten warned us about was, in fact impassable, we would have had to backtrack about 80-100 miles around the north side of the lake to get to where the road would then take us back south to San Jose. With a good amount of dirt planned for the final day back into San Jose, the prospect of losing those few hours to cover the 100 mile backtrack sounded unappealing, but so did skipping both this great town in the mountains as well as the river I’d heard so much about.

As this was an adventure, we decided to go for it and headed southwest around Lake Arenal, stopping to check out the volcano before weaving our way up to Essence Arenal, a brilliant boutique hotel with amazing views of both the lake and the volcano in the tiny town of El Castillo. As there are no buses or taxis that do regular service between the nearest town, La Fortuna, and El Castillo, you need your own transportation to get there. So while we were amongst only other foreigners when we were there, we had at least escaped the surfers and the barefoot burnouts that haunt the more easily accessible towns. Niko, the German proprietor, said it best, “Bad roads bring good people.”

We asked a couple locals and got mixed reviews about the river, so we decided to do some reconnaissance and rode down to check it out so we would know what we were in for the following day.

Thorsten had told us it was only passable a small percentage of the days in the year, and even on those days you would need at least three guys, one to ride the bike and one on each side to keep you upright given the strong current. We were pleasantly surprised when we got there and walked across to find that it was only a few inches above my knee, and not flowing too fast. It seemed doable, and a quick consultation with some locals coming from the other way confirmed that this was the biggest crossing between El Castillo and the road we wanted to connect to.

The rest of the night was spent hanging with a few other travelers, swapping stories about our trips, and mentally preparing for our return to San Jose, and ultimately back home.

With the much-anticipated river and a lot of miles to cover, we got up early and had the earliest start of the trip. It was a quick jaunt down to the river where we unsaddled, walked it again to confirm it hadn’t risen substantially, and plunged in. I rode the bikes across with Mike walking along on the down-river side pushing back on the bike against the current, which was of course stronger against the bike than it had been when we were just walking it across.

The crossings were pretty uneventful all things considered, albeit very exhilarating, if for no reason other than we’d been told that we wouldn’t be able to make it and that it was the largest river we’d crossed by at least 50%.

Once across, the remainder of the road around this south side of the lake didn’t disappoint, it was pretty rugged and had a good mix of everything from rocks, hills, more water crossings, and even some random patches of sand. It felt pretty great to be completing this loop around the lake and to be headed back towards San Jose, and to be headed back home.

This had been a substantial adventure for a lot of reasons, and the ride back south provided a good amount of time to reflect on the things we’d seen, the remote villages we were fortunate enough to visit, and all of the people we interacted with; which is probably what Mike was doing when he took a turn too hot, swept just a couple inches too wide, ran out of road, and took a tumbling dive onto what was probably the nicest and smoothest pavement we had ridden. I saw the whole thing unfold in my rearview mirror as I heard him start cussing in the intercom as soon as everything starting going awry, and all things considered, it didn’t look too bad.

After getting his bike picked up, we did a quick inventory and the most damage was strangely done to the top of his foot; we can only assume it scraped the edge of the road where it connects to the dirt. It appeared to be a typical scrape, albeit a pretty gnarly one, so we cleaned it as best we could with little first aid-kit wipes, bandaged it up, and pressed on.

The rain started coming down about 2-1/2 hours outside of San Jose and didn’t let up until about a mile away from Thorsten’s shop. I had been concerned about this kind of rain the entire trip, and we couldn’t have been luckier that it held off literally until we were on our way in; just another reason that this was the perfect trip.

“Twenty years from now you will be more disappointed by the things that you didn't do than by the ones you did do. So throw off the bowlines. Sail away from the safe harbor. Catch the trade winds in your sails. Explore. Dream. Discover.” - Mark Twain