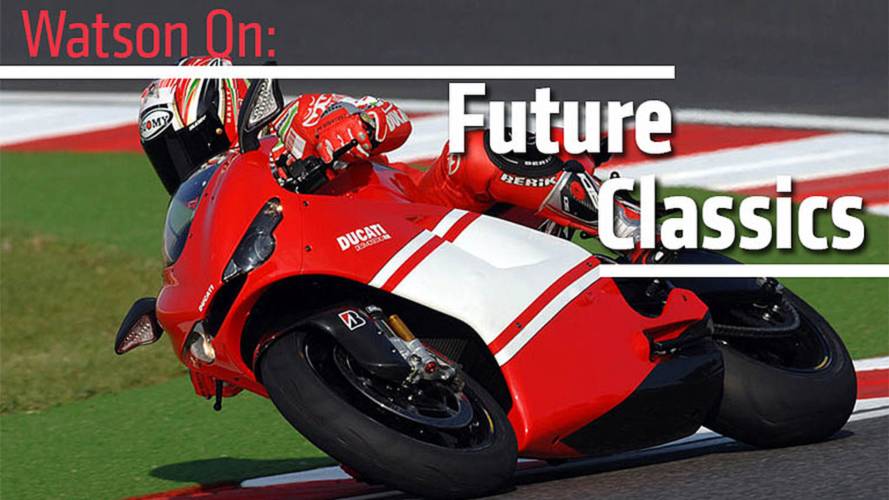 Are these all destined to be the collector’s bikes of tomorrow? We explore the next crop of future classic motorcycles.

At this time of the year I get bombarded with auction catalogs for up and coming sales of some truly fantastic motorcycles. There’s so much to choose from it’s hard to know where to start daydreaming. Maybe it should be a Brough Superior or a 1950s Manx Norton that actually raced, or a Coventry Eagle Flying 8 or perhaps a Vincent Black Shadow.

The problem is, I’d really like to have all of these in my garage but they go under the auctioneer’s hammer for outrageous sums of money. We’re not talking tens of thousands of dollars here but hundreds of thousands.

I’d have to sell the house, all our furniture, my wife and son and I’d still not have enough to put down a decent deposit on any one of these.

So it got me thinking that maybe the best place to start looking for a classic bike is actually staring me in the face. Maybe I should consider one that’s been made in the past 10 years that could have the collectors scrambling over themselves to buy it in the future.

But the problem for me is identifying which of the bikes in the past decade is going to earn the status of classic and become sought after in the future. A friend of mine who dabbles a bit in classic bike sales tells me that a motorcycle that gets the enthusiasts waving their checkbooks around will usually come from an interesting brand, it will have some technical innovation on it that was considered the best in its day, and maybe also have some interesting racing history. But above all that, it has to be rare.

That’s the thing about old bikes. The really good ones were not made in huge numbers and in some cases just in tens or just hundreds. Many of those have long since disappeared either crashed or scrapped and what’s left is just a handful of rare, valuable bikes.

So what’s going to be a future classic of tomorrow? The first issue I think I face is that motorcycles are now produced in much larger quantities than in the past so the exclusivity factor is not there. Over time that may improve as they too will get crashed, trashed and modified. So eventually you should be left with a few that are original, low mileage examples of great bikes.

That $5,000 increase is not huge and was no doubt due to the fact this Yamaha had never been ridden. It was also one of 500 race-homologated versions produced by the factory designed to compete in the World Superbike series.

But the interesting thing for me in all of this is that this special Yamaha hadn’t lost any money since it was first sold. What will it be worth in another five years? Will it depreciate dramatically if it’s used or will it continue to rise in value?

My gut feeling tells me that the future classics are going to have to be limited edition, race-derived bikes. Limited edition has got to be just that. Small numbers, something with particularly special engineering parts and materials (think carbon fiber, titanium con rods etc) and probably designed more for the track than road use. Just putting a ‘Limited Edition’ sticker on a bike because it has a fancy color doesn’t cut it with me, or potentially with the collectors of the future.

I may be totally wrong here but I think the Italian motorcycles of the past decade maybe the ones to keep an eye on. What about Aprilia RS250? Produced from 1995 to 2002 in road specification? It was a big hit with enthusiasts and earned a loyal following particularly in Europe. Derived from Aprilia race winning GP250, the RS250 looked good and rode well and I think maybe a future classic in the making.

Then there’s Ducati. There’s a school of thought even today that every bike that leaves the Bologna factory is destined to be a future classic. But Ducati like every other manufacturer has had to ramp up production in recent years to remain profitable and the exclusivity label is not quite as rare as it once was.

The exception though is the recently launched Panigale  (the 1199 and the 899) both are super high tech, sold in low numbers with incredibly expensive price tags and in the case of 1199 already sold out to collectors worldwide. Prior to this pair, Ducati launched the Desmosedici in 2006. Based on its MotoGP racer, the Desmosedici proved so popular the factory had to increase the original limited edition numbers from 500 to 1500. But I’m not sure that’s going to matter much in the future. The Desmosedici is still a pretty special bike and is going to be a rare and sought after.

What else in the current crop of bikes stands out as a future classic? There’s Honda’s fabulous Fireblade and Suzuki’s GSX-R 1000 and Yamaha’s R6. Are these all destined to be the collector’s bikes of tomorrow? I honestly don’t have the answer but let me know your thoughts in the comments below, as I would really like to start saving now.