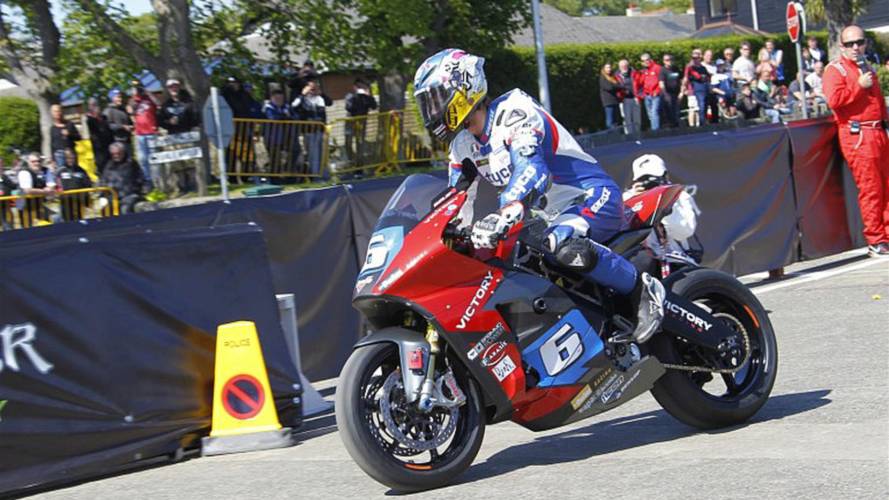 Dunlop injury forces Victory Racing Team Change at IOMAs the result of William Dunlop suffering a broken rib and bruises in a crash at Laurel Bank in...

As the result of William Dunlop suffering a broken rib and bruises in a crash at Laurel Bank in Monday morning’s Superstock practice lap at the Isle of Man TT, his Tyco BMW teammate, Guy Martin, will ride the Victory Racing electric motorcycle in Wednesday’s TT Zero race.

Dunlop was practicing in the Superstock class—not the e-bike class he rides in for Victory—when he crashed his Tyco BMW S1000RR. He was taken to Nobles hospital where it was determined that his injuries will keep him out of any more racing this week.

Martin took to the Victory Racing e-bike very quickly—in a literal sense—turning a remarkable 104.56mph lap and hit 147.8mph through the Sulby speed trap in his first ride on the bike (and his first outing on an electric bike, for that matter.)

“I couldn’t be more impressed,” Martin said after his first practice lap. “It was mega. So quiet and really fast. A mega experience.”

The other half of the Victory Racing team, Lee ‘General Lee’ Johnston also had a fast practice, as he rode a 103.94mph lap and screamed through the Sulby speed trap 15mph faster than his previous practice lap, hitting 157.9mph.

As he walked up pit lane, Johnston said he knew he’d ridden fast early on: “I caught up with Guy at Sulby and got a good slipstream then passed him,” he said. “I was starting to slow coming down from the Creg, then Guy came past.”

Team Manager, Brian Wismann, said: “The team were gutted to hear of William's crash during practice this morning, but are relieved to learn that he's OK and will make a full recovery.  We had a talk with William and he pegged Guy as the best rider to fill in for him on the Victory Racing electric prototype, so we moved quickly to get Guy confirmed for the bike.”

“We sent Lee and Guy out for today's session with the power turned up a bit from the first session, and the riders made good use of it! Unfortunately, we overshot our mark a bit and both riders slowed in the final mile to cross the line. Luckily, we've been given another qualifying session tomorrow so we can take another shot at getting the perfect balance between power and energy consumption,” Wismann added.

After Johnston achieved 157.9mph today on the bike, Victory Racing and Parker Racing have more details about the design of the electric motor that propelled him to that speed.

The motor is made by Parker and called the Parker GVM. It’s cylindrical and sits behind the swingarm’s pivot point. The Parker GVM is just eight inches (0.2m) in diameter and five inches (0.13m) long, but generates 175hp, giving around 165hp at the rear wheel.

It is 97 percent efficient; nearly all of the electrical energy drawn from the Brammo batteries is converted in to kinetic energy to drive the chain and sprocket on the rear wheel.

Parker has designed an internal water-cooling system for the GVM motor. It resides within the motor, rather than creating a jacket around it. This way, the smaller volume achieved means that the motor has a much higher power density.

The next practice lap for the TT Zero is planned for 3:25 local time on Tuesday, June 9th with the race scheduled for 10:45 on Wednesday June10th.  Times, however, can change without notice. See the full race schedule Here.

More information on Victory Motorcycles is available at www.victorymotorcycles.com and on Facebook.