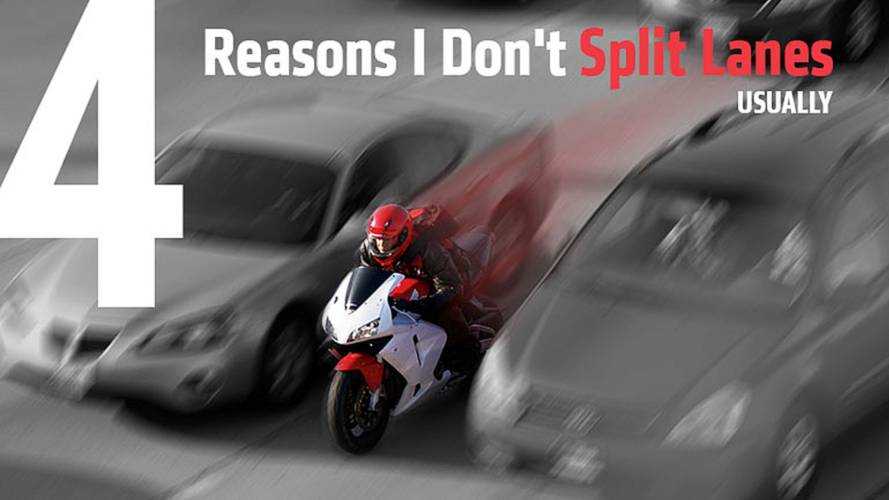 Four reasons I don't split lanes: it's illegal, dangerous, scary, and it's not fun. Still, 99% of motorcyclists in the world support lane splitting.

As a guy who began riding in the friendly confines of New York City, I was always envious — okay, downright jealous — of my friends and colleagues in California who could split lanes. It made perfect sense: LA's copious freeways with their ample lanes (comparative to NYC's narrow tracks) seemed ideal for zipping through the rush hour crush. And I saw some crazy moves on visits to Europe. If those madmen could survive cutting between insane traffic, why oh why couldn't I?

Of course, 99% of motorcyclists the world over support the notion. Even the California Highway Patrol recently released a set of guidelines on lane-splitting's proper implementation; lobbyist groups such as LaneSplittingIsLegal.com are trying to get the practice legalized nationwide; and even the AMA, while neglecting to technically endorse it, is sticking to its tried-and-true "personal freedom" company line.

But, since moving to California last year and becoming one of the lane-splitting hoi polloi, a very jarring and very real fact has made itself as plain as day: I'm a one-percenter. I don't like to split lanes.

Recently, Hunger Games star Josh Hutcherson was on The Late Show, telling David Letterman all about his Sportster and how he rides "everywhere" in LA. Dave brought up lane-splitting, to which the kid made a smooth retort. He then added, in all seriousness: "It's only legal in, like, three states in the US." The conversation then moved on to other, more important things (mainly Jennifer Lawrence).

Here's the deal, Josh: Unless you're riding in the state of California, lane-splitting is prohibited in the United States. End of story.

A bigger problem? As recently as 2012 about 53% of automobile drivers in the Golden State — where lane splitting is expressly legal — didn't even know lane-splitting was an acceptable practice in the eyes of the law. Fifty-three percent! Are you willing to put your life in the hands of about half the drivers on the 5 freeway? I'm not.

Lane-splitting takes what is already a dangerous practice and cranks the risk factor up to 11. Oh sure, your adrenal glands start pumping out the Good Stuff — but for all the wrong reasons. There are just too many variables out there. Even in traffic, the threats to your life — in that space, at that speed, on your vehicle - are too many to count. And most of them have nothing at all to do with you.

As I said above, I don't usually split lanes. Oh, I do it! But I don't like it. And only when traffic is moving really slow. I will never understand the logic of splitting cars that are already doing 70 miles per hour. Fact is, there is no logic to it. Go down at that speed and you're staying down — ATTGATT or not.

Lane-splitting is scary business — anyone who tells you different is lying.

Hey, scary can be fun. Danger is exciting. It's fun to get scared on a rollercoaster, or at one of those haunted houses around Halloween. Scary is fun when you know deep down there's no way you're going to get hurt. Scary is fun when you're tempting the forces of nature, or the boundaries of your own skill, and you're confident you've done all you can to protect yourself through equipment, practice, and gear.

Scary is not fun when my very livelihood depends on the whimsical, distracted attention spans of a thousand other drivers who are piloting bigger, harder, heavier machines than mine, and are already pissed because I'm making WAY better time than they are — and 47 percent of them think I'm a no-good scofflaw.

When I was just starting out, a very wise man once told me "motorcycling is supposed to be fun." And I take that to heart to this day. If it is not going to be a pleasant, enjoyable experience, I'd just as soon take the car.

So kudos to you guys who insist that riding in the rain is a fun or a somehow necessary experience; I've done it plenty, and there is absolutely nothing fun about it. In fact, I think it blows. So next time, I'll wave to you from the plush comfort of my dry, warm automobile as I motor by. You'd like to wave back, I know, but you won't; your body is too cramped from shivering. It's okay, I understand, I've been there.

My point is this: lane-splitting is the bad kind of scary, and therefore it is not fun. And if it ain't fun, I ain't doin' it.

Unless I'm stuck in traffic, of course.

**Note: This article represents the opinion of the author and not necessarily that of RideApart or its staff.