Ural's 2014 Lineup Is The Most Comprehensive Upgrade In 10 Years 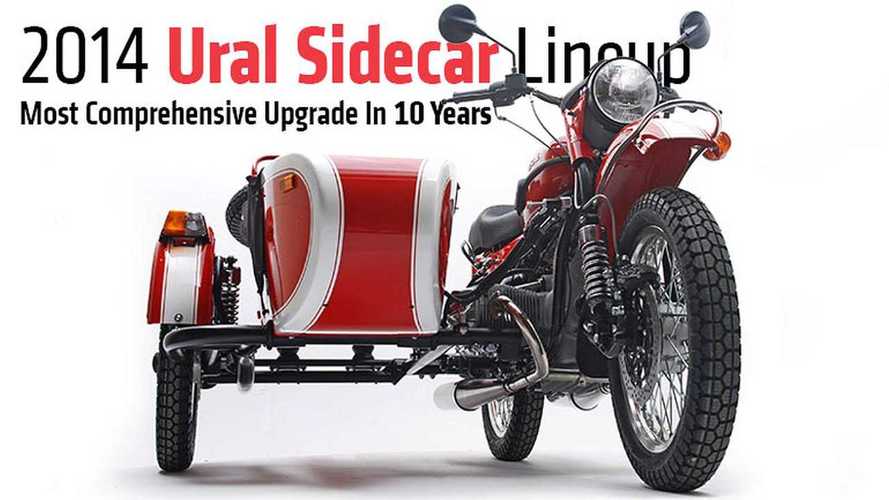 “We made the bikes lighter, faster, more responsive, more fuel-efficient and better in handling and braking,” explains Ural president and CEO Ilya Khait. “We retained our classic charm, ruggedness and unpretentious character, but performance-wise, these bikes are closer to what riders expect of a modern day motorcycle.” The 2014 Ural Sidecar lineup has been comprehensively updated with fuel-injection, disc brakes on all three wheels, a new hydraulic steering damper and dozens of other upgrades.

“We know there are a large number of people who like the idea of a classic motorcycle with sidecar,” continues Khait. “But, the well-known ‘quirks’ of previous generations of Urals has stopped some of them from buying one. With the introduction of the new Ural, we’re hoping to get another chance.”

That consumer experience matches our own. We love the amazingly unique character of Ural’s bikes, as well as their surprising all-terrain capability, but have been let down by their limited performance and… challenging handling.

This comprehensive series of changes has been designed to target both factors, while improving both fuel economy and emissions too.

The most notable upgrade to the engine comes from the swap from carburetors to fuel-injection. The new closed-loop system has been engineered specifically for Ural’s 749cc, air-cooled boxer by the Michigan-based Electrojet Inc, using Bosch and Delphi components. Individual ECUs control the injectors for each cylinder, precisely managing fuel delivery and ignition timing for each, while communicating with each other to deliver smoother idling and balance. An added bonus of the two-ECU arrangement is that the bike will keep running, even if one of the ECUs is knocked out; a welcome feature on a rugged machine.

A new, larger airbox (nearly twice the size) and improved cam profile complete the engine upgrades. The larger airbox provides less restrictive airflow while further aiding balance while its inlet has been raised to make it more weatherproof and to make servicing easier. The camshaft will lead to shorter valve lift durations, improving low- to mid-rpm torque.

Gallery: Ural's 2014 Lineup Is The Most Comprehensive Upgrade In 10 Years

Slowing down that new performance is a new brake system that fits discs to all three wheels. Since 2003, Ural sidecars have been fitted with Brembo hydraulic disc brakes on the front wheel, and cable operated drums on the rear and sidecar. In 2014, all Ural sidecars will now be fitted with a Hayes Brakes floating caliper on the rear and a two-piston Brembo on the sidecar wheel, both operated by their own Brembo master cylinders.

Ural says this setup “dramatically” increases stopping power while reducing rider effort. The parking brake has also been redesigned and repositioned, again making it easier to use.

Also increasing safety will be the fitment of a new, hydraulic steering damper. Previously, Urals were equipped with a friction-type damper. While that facilitated convenient, on-the-fly adjustments, it doesn’t lead to what Ural generously describes as “consistent handling.” Right now, riding a Ural requires constant steering input just to keep it going in a straight line.

The new, 18-position hydraulic damper should fix that. “Riding the bike, equipped with new damper, requires less rider input while feeling more ‘planted’ and connected to the road surface,” explains Ural. “As an added benefit, the hydraulic damper reduces the amount of sidecar specific yaw (pull to the right or left when accelerating or decelerating). For newbies to sidecars, it eases the transition from two wheels to three wheels.”

Looking at these pictures, you’ll notice further, aesthetic refinements. There are new kneepads and badges on the gas tank. A new dash incorporates modern indicator lamps in a new, simpler binnacle that better follows the contours of the headlight. A new front engine cover is slimmer and cleaner, while incorporating the IMZ-Ural logo.

Can all these changes finally bring Ural into the 21st century? This sidecar crasher will be riding the new bike early next week. Gulp. I’ll let you know how it goes.