Black To The Future For Suzuki 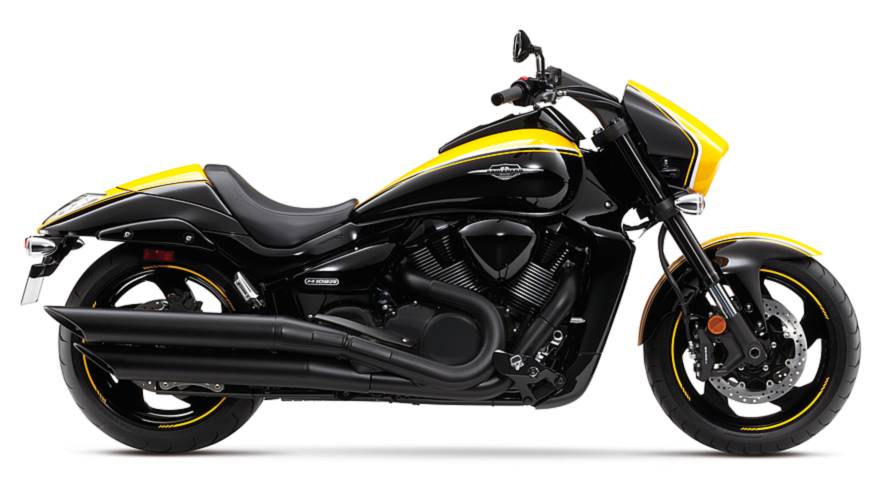 Black To The Future For SuzukiSuzuki has announced this week three new versions to its cruiser line-up that continue its theme of B.O.S.S. (Blacked...

Suzuki has announced this week three new versions to its cruiser line-up that continue its theme of B.O.S.S. (Blacked Out Special Suzuki) that began with the C90T Boulevard we tested last month.

There are no new engines or even new bikes but instead the B.O.S.S black paintwork treatment has now been extended to the C90 (the same bike as the C90T), the M109R and the C50.

The C90 is identical to the T version but minus the bags, windshield. You can’t take either off the C90T so this is Suzuki’s take on a naked version of the Boulevard. No changes in the engine department either there’s still the 90 c.i (1462cc) v-twin engine and shaft drive. Just like the C90T everything on the C90 B.O.S.S. is painted black from the mufflers to the wheels, forks and engine covers.

Suzuki’s lightweight and best-selling cruiser the C50 with its 850cc v-twin also gets the blacked-out look from its slashed pipes to fenders and everything in between is painted black making it look like a scaled-down version of the C90.

The M109R, Suzuki’s big muscle bike, with that massive 109 ci engine will also be available in a B.O.S.S version but with a splash of what Suzuki calls Marble Daytona Yellow flashes on the gas tank, fenders, headlight and wheels. Everything else, on the bike, you’ve guessed it, is painted black.

All three new Suzuki B.O.S.S. bikes will be in dealer showrooms by July.