The Realities of Riding 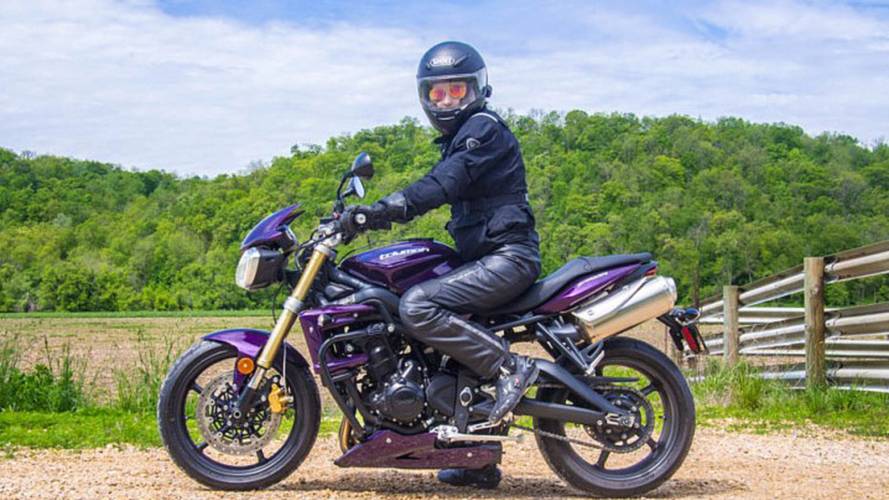 Recently, I was reminded that Motorcycling is a dangerous hobby... A second later, the instructor was standing over me... "I just broke my foot."

How many times have you heard the statements below?

There are two kinds of riders: Those who have crashed, and those who will crash.

All the gear all the time.

I have lived by those statements since I started riding. I've had a few minor falls, which were glaring reminders that this is a dangerous hobby and I should never stop having immense respect for what these machines are capable of. But recently, despite the odds, I was reminded of this again. This isn't a happy story, but hopefully it can remind some people of the risks we take.

In May, I accomplished a major goal that I'd spent two years saving up for: I picked up my new-to-me 2012 Triumph Street Triple in Imperial Purple. It was hands down the most powerful and beautiful machine I'd ever owned. It was my dream bike. I wrote it about it the other week.

The bike was 500 miles away in Omaha, NE when I bought it, and I rode it home with a stupid grin on my face the entire way. I was so ecstatic to get to know my new machine. My boyfriend and I began dreaming of weekends on twisty backroads so I could get acquainted with it.

Our First Time in the Twisties

A free weekend appeared on our calendar, and we decided to make the most of it by taking a trip to southwest Wisconsin. If you've never been, it is a true gem in the Midwest—there are actually nice twisty roads for cruising around. The county roads are referred to as "alphabet roads" since they are all named as letters "Highway B," "Highway CC," "Highway KR." A good day for us has been getting lost on the alphabet, finding a place to stop for lunch, and then eventually making our way back to whatever rundown motel we decided to stop at for the night. It's pretty magical. It was the perfect destination for me to get used to my new bike.

For this particular trip, I realized I did not feel like the confident rider that I usually am. I slowed more in the corners, and often times my braking was fairly bumpy. I felt anything but smooth on a bike that is known for being smooth as glass. After some reflection, I realized this should not have been much of a surprise. I'd put 25,000 miles on my Ninja 250, which is a motorcycle that is not known for being anything spectacular (though I loved that bike dearly.) I had taken multiple classes on the machine, learning how to maximize the braking and acceleration on it. The other bikes I owned were even less powerful: a CB175 and a DR200. It was clear that it would take some time to adjust to my much more powerful bike.

My boyfriend even remarked on my uneasiness, noting that I was much quicker and confident with my Ninja 250. I confessed my troubles, and we made a pact to take the first class together that we could find so that I could adjust to the features of my new machine. I was determined to ride the snot out of my new bike, and eventually, I would control it as well as I did my last bike.

Taking Control of the Situation

Finally a time lined up for me to take the MSF Advanced Rider Class, even though my boyfriend would be out of town at a bachelor party. We had plans to go ride the Amalfi Coast two weeks later in Italy, so I figured the class would kill two birds with one stone: I'd get used to my new bike, and I'd have practiced some finer moto skills before my most exciting road trip to date.

MUST READ:  Preservation and Security: A Shed of One's Own | RideApart

If you've never taken the MSF Advanced Rider Course, I can't say enough good things about it. The first half of the class is talking about techniques and road hazards, and the second is advanced parking lot drills. At lunch, I chatted with one of the instructors (who is also a friend of mine) about my new machine. I confessed that I felt uneasy about the powerful brakes, and we agreed that this would be a great day to get used to them. When the first drill had finished, I was starting to feel like it was going to be a great day.

The next drill was the braking drill. When my turn came, I tried to focus on doing everything right: I would wait until I passed the cones, I focused on pulling in the brakes progressively, and then I'd put my feet down to catch the bike. But once again my initial squeeze was too much, and the progression only made it worse. The front end immediately locked up, the bike folded into the right, and I was unable to jump off quick enough. In the moment, plenty of expletives popped into my head. My knee and foot hit the ground first, followed by my elbows, and my head never actually hit the ground. As the bike toppled on top of me, I felt the crunch in my foot and knew immediately what had happened. A second later, the instructor was standing over me as I proclaimed, "I just broke my foot."

He went through the procedure to ensure I didn't have a concussion, checked that no other body parts were impacted, and demanded that I didn't try to stand up. I have never broken anything before, but the pain in my foot was unlike anything I'd ever experienced and I was completely sure that that is what had happened. There was a survival mechanism that kicked in and made me completely aware that if I stood up, I would likely pass out from the pain. One short ambulance ride later (and I was pretty disappointed they wouldn't turn their sirens on), I was set up in the ER awaiting an X-ray.

My boyfriend was still out of town with his friends, but a few frantic text messages to him and he wasted no time making his way back to our house to get the car and meet me at the ER. The instructor's wife (and good friend of mine) graciously kept me entertained in the ER while we waited for X-ray results. The doctor finally returned.

"Well. You've got at least four fractures in your foot."

My heart sank. She continued on with the details, but I interrupted her, "I'm sorry, I need you to fast forward to the one important part that matters. I'm supposed to go riding motorcycles in Italy in two weeks—am I going to be able to do that?"

The doctor's eyes took pity on me as she said, "No. I'm sorry. It's going to take at least six weeks to heal. You might even need surgery."

It took all my strength not to cry. When my boyfriend arrived at the ER though, I couldn't fake being tough any longer. I cried about how I messed up—Italy was over and our dreams to ride this summer were over...it was all over. As the doctor came back to set my foot in the proper position, the pain of moving it induced more tears and screams. Some days are better than others, and this day was one of the worst.

It's been about a week since that happened, and we've finally gotten me to an orthopedic foot specialist. He reiterated that the damage is pretty bad, and I will likely never be able to do high impact activities like jumping or running with my foot without at least some pain again. That doesn't really bother me though. I hate running, so I welcomed a medical excuse to not have to do do it. On the extreme bummer side, he told me not to go to Italy. I can't walk, and it's a very serious fracture that doesn't need any occasion to get worse.

On a happier note, the doctor doesn't believe I need surgery, though he might change his mind after I'm able to put weight on my foot in a few weeks. There's a possibility of damage to the ligaments—it's called a Lisfranc fracture. It's frustrating to not know when it will be over.

I know, in the big picture, this is all going to blow over. Someday, we'll go to Italy. We'll take that amazing trip that I planned. We'll spend other weekends exploring more twisty roads in Wisconsin. Someday, I'll repeat that class and not drop my bike. Someday. I am not a patient person though, so I tend to feel more devastated that I worked so hard to have the ultimate summer and broke my foot in a safety class of all places. I'm not the type of person who can sit still for long, so laying on the couch for weeks has seemed more like a torturous exercise than the path to a healed healthy foot.

Yet, with all this time I've had on the couch, I have plenty of time to reflect on what happened. Perhaps I let my guard down in this class. Motorcycles are always dangerous, even in a safety class. You can get hurt at any point when you decide to swing your leg over one, no matter how proactive you are being about safety. It's not fair that I got hurt when I was trying to be safe, but who ever said life was fair? It's a risk I took when I decided to get on my bike that day, and so I needed to be open to the possibility. This experience has also been a decent reality check to consider if I'm truly okay with the risk I take of riding a motorcycle, and the risks of riding this particular motorcycle—but that's an article for another day.

So if you're going to get on a bike, remember that there is always risk involved. You can do everything to mitigate it, but you still might get hurt. This isn't the happiest article I've written, but it's a good reminder about motorcycling for us all.

Jen Tekawitha is a gimpy contributor to RIdeApart. You can follow the progress of her foot and other adventures on her instagram: @Jen_Tekawitha.

Thanks to Bree Radloff for photo contributions.