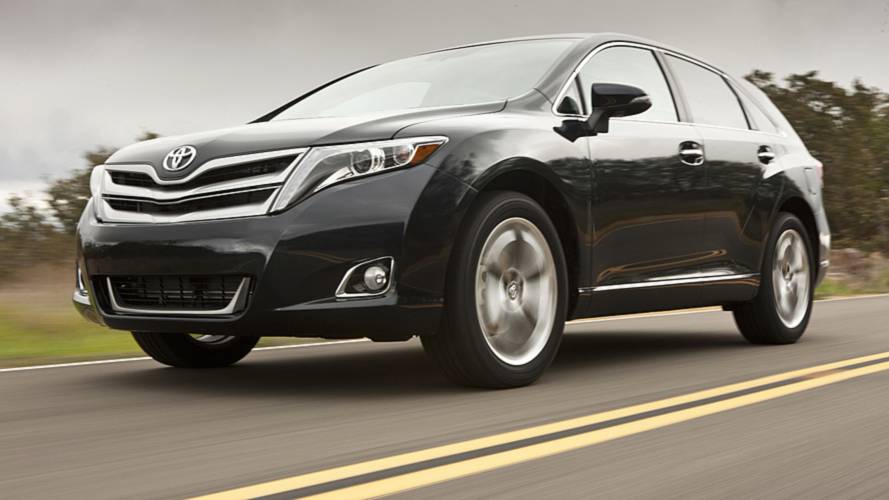 When approaching the front end of the 2013 Toyota Venza you could be excused for thinking something along the lines of, “my what big teeth you have!” Now we aren’t saying that the 2013 Nissan Venza XLE V6 was a wolf in granny’s clothing but we would say that when equipped with the 3.5 liter 268 horsepower/246 lb. feet of torque V6 motor which affords this crossover a bit of a growl and a certain accelerative bite.

While the chrome grille may be a bit too large for some people’s tastes, the look of the Toyota Venza overall is stylish, pert and handsome thanks to nicely judged dimensions and a squat looking rear end. We absolutely love the 3.5 liter V6 and the smooth 6-speed automatic which are seamless and enjoyably responsive during aggressive driving maneuvers. We also love the huge center console mounted cubby hole covered over by a sliding cupholder tray which also has nooks for pens and smart phones. This is a very well laid out cabin.

Our main gripe with the Venza came not from the driver’s seat but rather from anyone who rode in the back on the rather firm rear bench seat where one’s ears would be assaulted by an overly aggressive amount of road and tire noise. The sound seems to emanate from the rear wheel wells and implies less than generous sound deadening back there. Passengers up front, however, have a quiet and serene driving experience. So make sure you don’t like your back seat passengers.

The Venza is quite roomy.

Unlike the more utilitarian, 7-passenger Highlander that we reviewed earlier or the workhorse known as the 4Runner, this 2013 Toyota Venza XLE V6 is rated to tow just 3,500 pounds but that should be plenty for any motorcycle haulers out there. A tow prep package costs only $220 from Toyota and includes an engine oil cooler, larger radiator fan and a heavy duty alternator. We recommend that if you plan to tow anything with your Venza that you invest in this invaluable and smartly priced option.

The Gross Vehicle Weight Rating for this crossover is 5,095 pounds for this 3,870 pound vehicle which means you can haul passengers and cargo up to that weight without putting undue stress on the vehicle. This is not the same as how much towing capacity you have to pull a trailer behind your vehicle, of course. Cargo capacity behind the second row is 36.2 cubic feet growing to 70.2 cubic feet with those seats folded flat.

One thing that most impressed us about the Venza was the responsive and communicative steering that made parking lot maneuvers, aggressive cornering and even will make towing a much easier endeavor thanks to removing the usual SUV slop from behind the wheel. Brake pedal feel is mushy at first but gives solid bite when needed. Body roll is also kept nicely in check which is rare among most crossovers and SUVs. One might call the Venza a bit sporty. For a crossover.

We never have a complaint about Toyota’s corporate 3.5 liter 268 horsepower/246 lb. feet of torque V6 motor as we think it is truly an under rated gem among many inferior competing 6-cylinder powerplants. The Toyota V6, when mated to a six-speed automatic, can be silky smooth and quiet but as you approach the redline it gives off a snarling growl which is in line with the power on hand. We’d avoid the base 4-cylinder option in this vehicle.

We especially liked the ergonomic, high mounted automatic transmission shift lever which sprouts from high in the center of the dashboard much like one used to see in old Alfa Romeo automobiles. It works well and helps drivers not need to take their eyes off the road as they are changing gears in crowded parking lots which could easily cut down on the likelihood of an accident. Why more vehicles don’t use higher mountings for their shifters is beyond us.

The Venza comes with a handy 17.7 gallon fuel tank and boasts EPA fuel economy figures with the V6 engine of 22 city/26 highway. We averaged an impressive 24.7 mile per gallon average over the course of a weeklong stay with us.

Handsome, solidly built if just a little bit plain in an appealingly conservative manner, this Toyota offers all of these attributes whether you are talking about the interior or the exterior. There are not many boastful or eye catching design features beyond the chrome heavy front end and the attractive rear tail lamp treatment. As for the inside, just picture a more plain Lexus RX350 interior and you will have some idea what you will find in a Venza. Wood paneling and leather rule the day but to good effect.

The 2013 Toyota Venza XLE V6 we tested was a front wheel drive model that stickered for $33,180 to which we added the aforementioned tow package ($220), a Premium Package for $1,850 (panoramic sunroof, navigation, entune and JBL audio via center screen, integrated back-up camera, USB/i-Pod connectivity, 13-speakers for the JBL audio system) as well as $900 for a full tow hitch kit and $79 for a rear bumper protector. We also spent $1819 on rear seat DVD entertainment which also includes a separate $41 charge for the wireless headphones. Hey Toyota, why not include the headphones in the price of the DVD entertainment system as they are sort of necessary for parental sanity. The total? $39,189 with destination.

Rear shot of the Venza.

While we really do think the 2013 Toyota Venza XLE V6 is an exemplary crossover, at this price there is also a lot of competition for your hard earned dollar—many of which exist at your local Toyota dealer. The rear seat noise in the Venza is definitely something that Toyota needs to address before this becomes our favorite towing and hauling machine in their line-up. It’s their fault really for building too many good SUVs and crossovers.