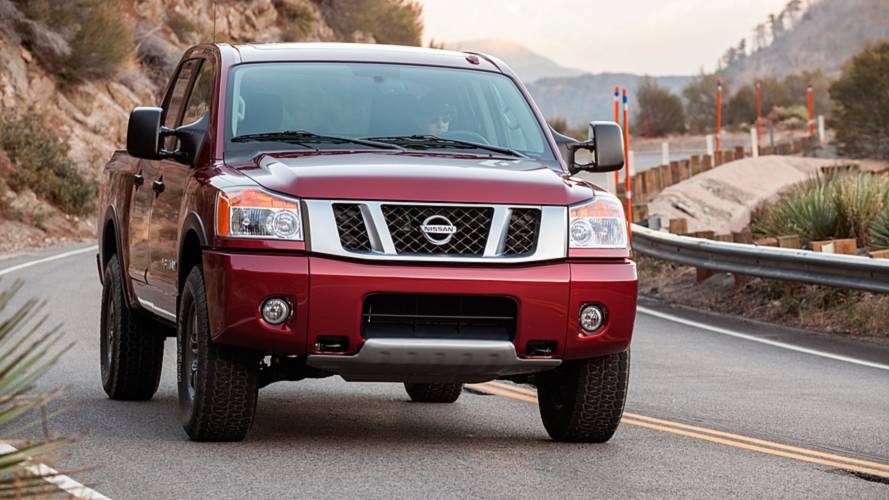 DriveApart Review: 2013 Nissan Titan Pro-4XDriveApart Overview When it comes to full size pickup trucks there are just some things you expect like...

When it comes to full size pickup trucks there are just some things you expect like extremely high towing capabilities, a solid work ready structure, a muscular and macho appearance and hopefully a decent interior with a solid bevvy of engine options. Actually, with the latest full size pickups we demand downright luxurious interiors if we so desire and we aren’t quite sure that this Nissan Titan with its dials taken straight out of 1993 really fits the bill.

Ford offers an insane number of engine options with the F-150 as does pretty much every truck maker besides Nissan with its 5.6 liter 317 horsepower/358 lb. feet of torque V8 being the only available motivating force. Not that we are complaining or anything about having that much power but do we regret not having any choice? And does this, considering its foes at GM, Ford, Dodge and Toyota force this Nissan into fifth rate alternative status? Let’s see.

We appreciated that our test 2013 Nissan Titan Pro-4X came equipped with a built in “utili-track” bedliner system with four adjustable tie down cleats so that if you plan to carry your motorcycle in the pickup bed you should have no problem keeping your payload stable. Our tester also came with a spray in bed-liner from the factory so your bike won’t cause undue and unattractive scratching in your cargo bed. Sadly, no bed extender was included in the tester package so it may limit larger bikes to your trailer.

We were not impressed with the build quality of this Nissan Titan as many of the exterior panel gaps were inexcusably wide in spots and the interior plastics did not befit a truck costing over $44,000. In fact, we felt the speedometer and tachometer gauges with their white backing and black numbers to be dated in the extreme, the in-dash navigation system to be simplistic and outdated with only the optional leather seats lifting the interior ambience somewhat.

The inside of the Titan.

The 2013 Nissan Titan Pro-4X can tow up to 9,500 pounds of trailer behind it and can haul 1,850 pounds of cargo in the pickup bed should the need arise for any motorcycle owner. This makes this one very utilitarian and useful full size pickup truck that may score low on creature comforts but at least takes its core tasks of being a truck very seriously.

Of all the full size pickup trucks on the market today, the Titan really doesn’t stand out in any one area when it comes to driving (or trucking) dynamics. It isn’t quite as rough riding as a Tundra but nor is it as smooth on bumpy tarmac as the Ram or F-150. Wind noise around the extra-large side mirrors made for constant aural accompaniment on the freeway unless we cranked up the 10 speaker Rockford Fosgate audio system which also sadly drowned out the 5.6 liter V8 engine’s nicely macho burble.

Steering feel was pretty much the epitome of numbness, much like what happens to your entire body if you try to sit through an entire film where Lindsay Lohan attempts to act. There is very little communication to what is going on with the front wheels and it makes parking lot maneuvers a hit and miss affair. Luckily, we never missed so we didn’t return the truck with any dents. You may not be so lucky.

All 2013 Nissan Titan pickup trucks come with a standard 5.6 liter 317 horsepower/385 lb. feet of torque V8 which makes all the right noises but seems a bit hampered by an occasionally confused 5-speed automatic. Shifts lack crispness giving the truck a lazy accelerative demeanor that tells the driver, “hey man (or woman as the case may be)! Don’t rush me!” Once up to speed, however, the Titan offers up plenty of passing power for long interstate cruises with a trailer right behind you.

As the Titan pick-up is about as wide of girth as your average Hometown Buffet speed pass holder, thankfully as part of one of the PRO-4X packages this truck comes with extra wide and extendable side tow mirrors with lower blind spot mirrors built into the rather large plastic housing. Sure, the side mirrors give the Titan extra wide ears but we’d rather knock one of them off than manage a full sideswipe of the Accord in the lane next to us.

Our 2013 Nissan Titan Pro-4X pickup with the 5.6 liter engine has an EPA estimate for fuel economy of 12 city/17 highway with our tester averaging 12.8 miles per gallon over a week of mainly around town driving. That’s not the worst we’ve seen in a pickup truck but not the best either.

We did think that the exterior styling of the Nissan Titan, while starting to look a bit dated next to competitors, has stood up to the test of time well as it still gives off a heady and macho air always ready to exude just enough toughness to stand its ground. Sadly, the interior is just a sea of thoughtless unimaginativeness where largeness is excused as a design motif simply because Nissan figured Americans would be buying the bulk of these trucks. There are knobs, buttons and switches scattered all across the dash in no logical order or array and we know Nissan can do better than this.

To this was added the PRO-4X Premium Utility Package for $1,500 which added a Rockford Fosgate 10-speaker premium audio system, power adjustable pedals plus the aforementioned side mirrors, spray in bedliner and utili-track channel system. Lastly, the PRO-4X Luxury Package added $2,630 for in-dash navigation, USB/i-Pod integration, leather seating, heated front seats, power adjustment for both front seats and memory settings for the seats, pedal and mirrors. The total with destination came to $44,515. Ouch.

Although there is nothing inherently wrong with the Nissan Titan as a full size pickup truck package, there is nothing entirely class leading about it in any way either. And for this price GM, Ford, Dodge and Toyota offer some very tasty variations on the same theme that are either better built, more efficient, offer more engine options and at the very least have nicer interiors. Sure, the Titan can tow and haul with the best of them but it in no way betters the competition in that regard either.