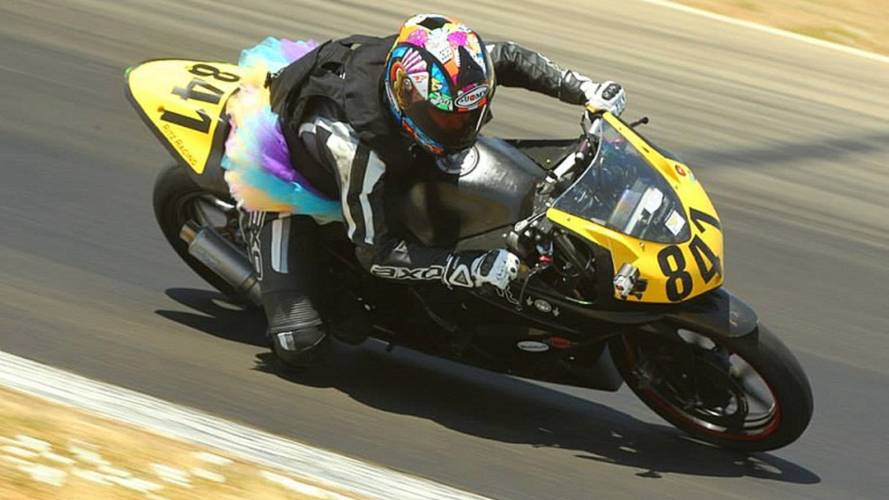 I’m a total moto track junkie. I mean, what’s there not to love about the track? The best thing about heading there is that you can go fast around twisty and tight corners while facing fewer consequences than you would on the streets. I’ve seen all sorts of bikes on the track—from BMW GSs, Yamaha 500s, and even Harleys. What could possibly make a track day even more awesome? Being a woman and having a day catered to you that's what.

Z2 Track Days hosted the 9th annual Women’s VIP event this past Sunday, June 14th at Thunderhill Raceway located in Willows, CA. Now guys, before you get all bent out of shape, this wasn’t a day where the boys were kicked out. It was simply a day where we women could gather, ride, and meet other female riders. You can read more about the day here.

READ MORE: My New (to me) Street Triple | RideApart

As you read, there are some good reasons as to why this day is so much fun. If you don’t feel like reading it, that’s okay! I’ll get over it. I’ll just go ahead and highlight the top four reasons why I love these track days below:

Most track days are broken up into groups of two or three based on riding skill levels. In this case, Z² has a three group set up: A for expert riders, B for intermediate riders, and C for beginners. Each group gets 20 minutes out on the track, starting at the top of the hour with A.

On this day, however, ladies were able to ride for at least 40 minutes. C group was "C/W" for the day, meaning ladies can run in that group too if they were in A or B. For me, it was nice to be able to start out in B and then have the option to go out again in C/W. Last year, I did both B and C/W, but this year I primarily stayed in B group. Either way, being able to ride almost all day is so luxurious!

While working as an event coordinator for liquor company in New Orleans (I know, shocking), the district manager once said that people will drink horse piss for a free t-shirt. Now, horse piss isn’t really my beverage of choice, but I really do like getting anything that’s free.

If you’re a lady and you signed up for this track day, lunch was included. Let me tell you, Thunderhill makes some amazing food, which is a bit of a relief since A LOT of other tracks make sub-par to pretty bad food while charging and arm and a leg.

Not only do I love a free lunch, but I also love raffles. The best kinds of raffles are the ones where everyone gets a prize...and that’s the kind that Z² provided (Woot! Woot!). There were so many great things that were being raffled off—items such as gift certificates from Cycle Gear and CT Pirelli tires, Yamaha T-shirts, MotoChic Gear items, Motion Pro performance tools, Yamalube oil, and free Z² track days.

I was hoping to get the Pirelli tire gift certificates, but didn’t. I still got a cool prize: four quarts of yamalube. A free oil change isn’t too shabby.

I got some oil!

3. An Excuse to Ride in a Tutu

I didn’t get the memo for last year's event and appeared tutu-less. At first, I didn’t really care to ride in one, but after seeing both guys and girls zipping by on the track wearing one, I told myself I’d get one for this year. I didn’t want a solid color, so I got one that had blue, pink, purple, and yellow in it. I must admit that after I put it on in the morning, the thing pretty much stayed on me until the end of the day.

I didn't want to ever take my tutu off...

I LOVED riding in my tutu. I didn’t feel or even feel that it was on me while riding—I knew it was subconsciously there. This, in turn, made going around the track more fun since I felt like I was dressed to look more festive.

The person behind me is clearly wishing they were riding in a tutu too...(Photo by Gotbluemilk Motorsports Photography)

As you can see in the pictures, my track bike is a Ninja 250. I'm clearly on a smaller bike, but for some reason this tutu made me feel larger than life. I totally felt VIP and received a lot of compliments. I really wish I could race in this tutu because I felt it gained me an extra 10 horsepower.

As I stated earlier, the women’s track day was mainly a day for female riders to congregate, ride, and meet other moto gals. There were 30 women of various riding levels that attended the event this year.

When I met someone new, I always asked her what she rode and for how long. Again, it was nice to be able to relate to some who've been riding the same time frame as I have and/or the same type of moto I have. It's also great seeing fast ladies out there giving the boys a run for their money.

READ MORE: Kickstand - In Defense of the So-so Motorcycle| RideApart