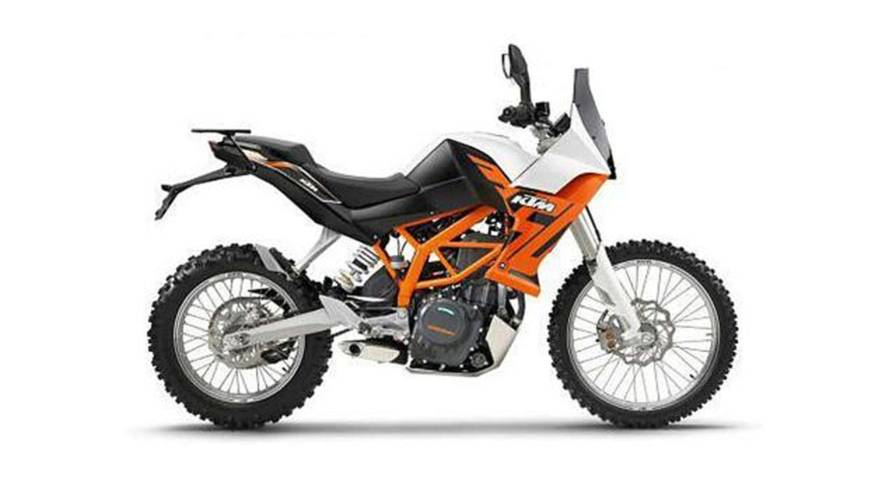 It's official: the KTM 390 Adventure is happening.

Apparently the folks at KTM read and were inspired by my article about ADV bikes for beginners (ha ha, kidding) - the KTM 390 Adventure is now being tested in India. This is good news for those of us who are interested in an on- and offroad touring machine that's a little easier to handle, as well as being easier on our bank accounts.

In addition to spawning discussion about when or even if the 390 Adventure will be released here in the States, the little ADV bike has spawned a number of really bad Photoshop renderings, since it seems that KTM hasn't released any actual images of the bike. Will it look like this?

Eh, probably not. That's an enduro with the word Adventure slapped on it. Will it look like this?

Getting warmer, maybe. Not sure where you'd put panniers on this thing, though.

But enough speculation - let's talk about what we do know. We know that over two years ago, KTM boss Stefan Pierer slyly hinted at the forthcoming 390 Adventure when he mentioned that KTM was working on a small-bore "travel" model, after a photo of the company's product roadmap was leaked. What was originally KTM's 350 Endure has evolved, it seems.

India's CarTrade has some additional, alluring details. Two 390 Adventures have been shipped to India for testing. According to CarTrade, the bike will be powered by the same 374 single found in KTM's 390 Duke and RC390. Both bikes have gotten high praise from multiple reviewers, so this bodes well for the Adventure incarnation. The bike will have all of the features one might expect from an adventure tourer: long-travel suspension, hand guards, windscreen, and dual-purpose tires. It's not known if the bike will come with panniers, or if those will be an option for purchase. And the ABS question is interesting as well; the 390 Duke and RC390 both have ABS as a standard feature, so it's a safe bet that the 390 Adventure will too.

It's an interesting time for new riders, as well as riders who don't want or need a big bike; there's never been a better time to get a small bike, and those who might be a bit bummed because the ADV archetype doesn't extend to bikes in the 300 range have a lot to be excited about. Honda has produced the CX-01 concept, which will likely take the form of a CB300X. There's definitely precedent for this; Honda is already producing the XRE 300 for overseas markets. Benelli (Italian name, Chinese ownership) is developing a 302 ADV bike that may hit U.S. markets next year. And it's not a stretch to think that BMW might put out a G300GS. Fingers crossed that we get the KTM 390 Adventure here in the States; we'll follow the story and keep you posted as we learn more.