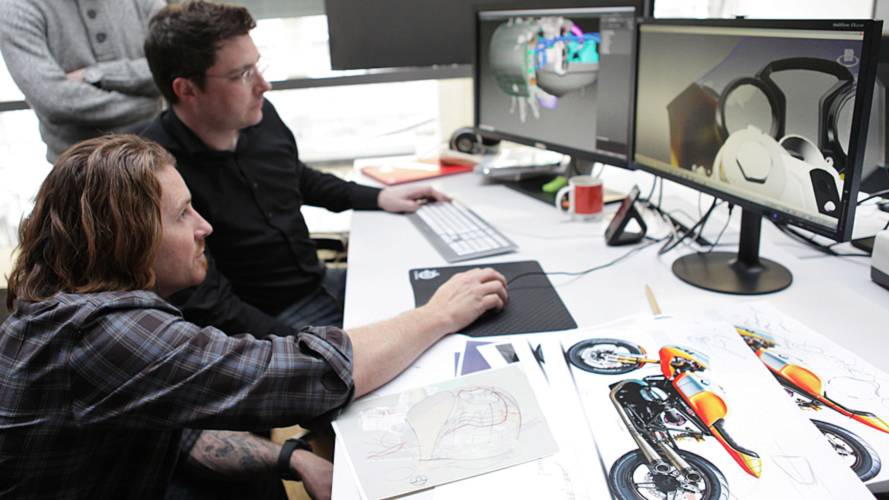 The BMW Concept Ninety — a modern intrepration of the original R90S — dropped jaws when it debuted at Villa d'Este last week. We caught up with Roland Sands, who built the bike for BMW and talked about what that was like.

Roland Sands: I met Ola from BMW Motorrad like 5 years ago. We hit it off and have always wanted to do a project together. When this one came around at BMW, he and Eddie had me in mind to make it happen. It was also a bike they wanted to be a runner and traditionally the concepts are mainly clay models, so it made sense for us to build it as we could get it built and running in a short amount of time. They also wanted the motor detailed out and that’s kind of my specialty.

RA: What was the design brief?

Roland: BMW had a direction for sure, and we worked as a team to get to what we wanted the final design to be. It was up to us to figure out all the connecting details to make it all work, but again we worked hand in hand with BMW and primarily Ola Stengard, who’s a really great guy. It was our relationship that made the project happen as quickly and correctly as it did.

RA: What was the design process like? Did you just pitch a sketch and then execute it, or was it more collaborative with BMW design?

Roland: BMW came with their initial sketches, we talked and gave our ideas and they continued to work through sketches and finally came up with something we all really liked. It was collaborative from start to finish which was really a great way to do it. Throughout the build I was daily on the phone with Ola in Germany passing back new sketches and solutions for every design detail. I think sometimes that could be a nightmare, but with the team we had it was seamless working from US to Germany. We both had our phones on at 2am. I was primarily responsible for all the billet goodies and everything under the body.

RA: What can you say about future plans for this bike?

Roland: I can’t say. It’s really up to BMW, but I see them moving in some really fun new directions.

Roland: I dig it. It just feels right when you sit on it. Plenty of torque and the power is linear like a Boxer is supposed to be. It turns in nice and precise, stays on line. The tires are obviously sticky. Brakes work really well and the suspension, although not race tuned, is a great starting point. Geometry is really nice and it steers light without any headshake. Given some time to dial it in I think it would be a really fun track bike. I drug a foot peg, but not the heads so that was a plus.

RA: Can you tell us about the helmet in those photos?

Roland: That is a Bell Auto racing helmet. Skratch and I laid it out and painted it the night we finished the bike. They day before the final photo shoot. The paint still wasn’t dry in the photos.

RA: What was the biggest challenge in designing/building this thing?

Roland: Not being in total control of the design was a new experience, but it ended up not being not an issue because I really agreed with where we were going with the bike from the beginning. On the build side, I would say the biggest challenge was getting 20 billet machined products including wheels and master cylinders reverse engineered, designed and machined in 2 months.

RA: What does the Ninety achieve that other modern bikes don't?

Roland: I hope it’s biggest achievement is that it gets BMW to push for more stylistic consumer bikes, which I think it will judging from the response. A solid traditional design that draws inspiration and brings attention to a bike like the original R90S is something that is needed for BMW as it’s so important for consumers to get some knowledge about where a lot of what they are riding today came from.

First bike with a fairing...that’s kind of a big deal. BMW brought a lot of firsts to our industry, telescopic fork, dual disc brakes, the list goes on. So it’s good to educate people to those facts. I think it also marks a return to traditional inspiration which in BMW’s case is a really good thing.

RA: It looks heinously uncomfortable. Flight of fancy or a realistic rider?

Roland: Looks can be deceiving Wes. Just look in the mirror...you're much nicer than you look, sweetheart.

It’s actually comfortable for a Sportbike, Feels close to the S1000RR. That said, it’s no touring bike. I just got off a R1200, wow. That’s a comfortable bike that actually works really well. Rode the 1600 also, sounds like an Enzo.

Roland: For an auto event I think it got more than its share of attention. Dude’s were like.. fuck yea bro! That thing is hella sweet!! But they said it in Italian so it sounded totally different. Don’t print that.