Motorcycles And A Misspent Youth 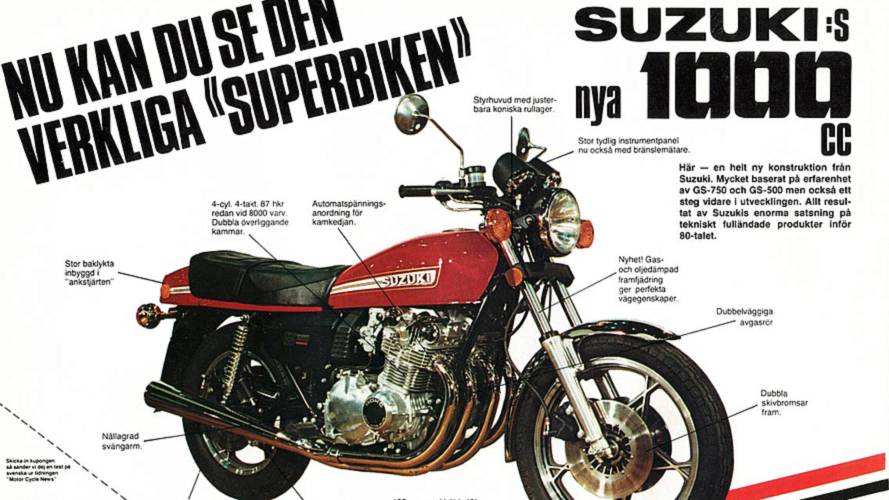 Motorcycles And A Misspent YouthThere is apparently a time in your life when, according to a famous 20th Century author, you simply have to “put away...

There is apparently a time in your life when, according to a famous 20th Century author, you simply have to “put away childish things” and become an adult. So why after more than 30 years do I still yearn to own either a 1980 Suzuki GS1000 or a 1981 Yamaha RD350LC (called the RZ350 here in the U.S)?

One is a big Japanese thumper and the other is a two-stroke screamer yet both were iconic bikes for me as an impressionable, motorcycle-loving teenager living in rural England. What is worse is I know more about these two bikes than is probably good or healthy for a man of my age.

This obsession with the Suzuki began when a friend of mine called Nobby arrived one summer’s evening with a brand new GS1000.at the village pub where we used to meet, hang out and talk bikes.

Everybody in life needs a friend called Nobby and he was an unusual guy. He said very little and was tall as he was round. Nobby never told us he was buying the bike and when he arrived he simply rode it between parked cars and up to front door step of the pub and left it there.

Thereafter for the next three years, that spot was always Nobby’s for his GS1000. And nobody dared take it because if you did he would come into the pub and hit you on the back of your head with his crash helmet.

But what is it about this old Suzuki? Back then it was good value at just over $2,700. It looked terrific and Nobby’s was finished in black. He could have chosen red, blue or even metallic blue, but to my eyes, Nobby made the best choice. The GS1000 has always looked great in black.

A prototype of the bike was shown for the first time at the 1977 Paris Motorcycle Show. Back then the other Japanese manufacturers were ahead of the curve with their big ‘1000cc Club’ bikes and Suzuki had arrived late to the party. Kawasaki had already launched its KZ1000 and Yamaha had the powerful XS and Honda its GL Goldwing.

The GS1000 shared the same engine and frame as the GS750 that came out a year earlier as the first of Suzuki’s big four-cylinder, four-stroke bikes. Consequently the GS1000 at 507lbs did not weigh much more than its 750cc sibling and the Suzuki engineers managed to increase the engine’s capacity by lengthening the stroke from 748cc to 997cc.

There was a five-speed gearbox, chain drive (although later models in the GS1000’s final years had shaftdrive) and unlike the GS750 the GS1000 had a larger fuel tank and the combination of air-assisted front forks, a stiffened tubular frame and adjustable Kayaba rear shocks.

The brief to the Suzuki engineers back in the mid 1970’s was to build a bike that was not only fast and reliable but also one that handled as well as anything you could buy from the European manufacturers. And to that end they succeeded.

The motorcycle media at the time loved the GS1000 with Cycle World in March 1978 saying: “The Suzuki GS1000 is so quick, so precise, so forgiving and so predictable that it’s hard to understand how we ever survived the Neolithic machines of our youth”.

Nobby, I am sure, would have agreed. He loved that bike so much he had ‘Suzuki GS1000’ tattooed onto his right forearm along with the name of his then current girlfriend inked in just underneath. It was impressive.

Nearly as impressive as our other friend called Mallet who claimed he had reached 100mph riding down the Main Street of our small village on his 1981 Yamaha RD350 LC. We were incredulous.

“You rode at 100mph, are you shitting us?” I remember asking him. Mallet was mad. Not in a stab-you-in-the face sort of way, but if you dared him to do something, no matter how stupid, Mallet would always, without fail, oblige you.

His RD350LC was a bike I really lusted after not only because it looked great (I’ll take one just like Mallet’s in white with red accents right now) but that screaming two-stroke engine at full revs sounded like nothing else I had had ever heard before or since.

It was an expensive bike when it was first launched in 1980 — some 20% more than the competition in the UK — but it rode like a racer and made you feel like Kenny Roberts on his way to a 500cc Grand Prix title.

There was a Yamaha RD 250cc version but the 350cc was the one you really wanted. It had a spine type frame, a sort of integrated fuel tank, a huge radiator shroud, and a neat rear end. For the early 1980s the RD looked radical, too, as it was designed in Europe and not Japan, so the clunky angular Yamahas of the past had been ditched for what I can only describe as a svelte, exciting street racer.

The liquid-cooled, two-stroke, parallel-twin engine didn’t seem to do much low down. There was a lot of exhaust noise and bumbling around until you got over 5,000rpm. Then the entire motorcycle seemed to go into frantic subsonic warp factor 12 and charged towards the horizon pushing your eyeballs into the back of your helmet.

Providing you could hang on, the RD would scream all the way up to 110mph and, perhaps beyond, but only if you were very, very brave. It was also worth keeping an eye out for any changes in the road surface as the bike could suddenly wiggle around under you without any prior warning.

Everything on the Yamaha seemed to be on the absolute limit from the narrow 32mm front forks to the rear, adjustable monoshock suspension. It weighed in at 315lbs and there was just 47bhp at 8500rpm, but the RD was a motorcycle that just begged to be ridden flat out everywhere all the time.

Which is probably why Mallet truly did reach 100mph down our village Main Street. But just to make sure we asked him to do it one more time for our amusement.

We heard the Yamaha long before we saw it with Mallet shifting up through the six gears, with the engine really starting to howl as he revved it higher and higher.

We waited for Mallet in the middle of Main and laughed and cheered as he flew by us at what was probably no more than 85 mph but to us it sounded like 250mph.

Before we could blink Mallet and the RD were gone. He left us in a cloud of swirling two-stroke exhaust fumes and a wail of exhaust noise bouncing off the village storefronts.

There was a problem though. Mallet had forgotten there was a left hand corner at the end of Main Street and he and the Yamaha shot through a tall hedge and disappeared from view as leaves and branches closed behind him and the bike.

Fortunately for Mallet there was just an empty field the other side of the hedge and he and the Yamaha returned to the pub a little later that evening back to fight another day.

So occasionally, when I get an idle moment ,I continue my quest to find a Suzuki GS1000 or a Yamaha RD350LC through this interweb thing. There are some out there. But you have to look long and hard to find anything that is anywhere near acceptable or worth the crazy money that some people are asking.

And then I remind myself these are bikes that are now more than 30 years old and they will break and bits will off them. So maybe it’s for the best that I put away these childish notions and be content with just remembering how great these motorcycles of my youth once were.