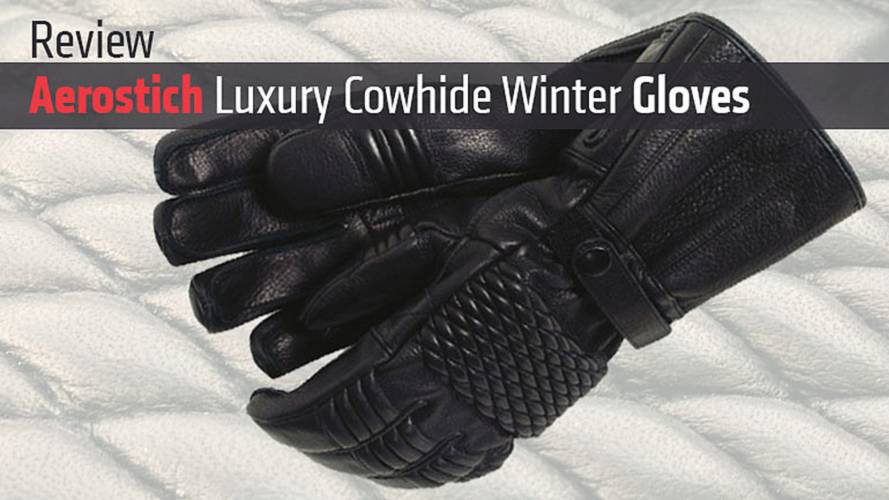 Extremely warm and very good looking, the Aerostich Luxury Cowhide Winter motorcycle gloves are also comfortable and made to the standard we expected.

Cold hands. They’re the one thing that is nearly impossible to do anything about without wiring in heated grips or gloves. At least that’s what I thought until I tried these fancy looking things. Learn why in this Aerostich Luxury Cowhide Winter Gloves review.

Understated and almost ridiculously comfortable, the “luxury” descriptor is apt. Top quality, waterproof Japanese cowhide forms the exterior shell, backed up by a waterproof/windproof membrane. Next is a soft, warm nylon pile insulating material that’s backed up by another, much thicker and fluffier layer of nylon pile on top of the hand for additional warmth, without spoiling feel.

I’ve only had these gloves for a month or so, but have worn them during two long and challenging trips. The first saw me ride up Interstate 5, all the way from Los Angeles to Thunderhill Raceway in Northern California, for a track day, then ride back that same night.  For the second, which you’ll be reading about soon here on RideApart, I flew up to Seattle and spent a day riding the heavily revised 2014 Ural Sidecar in the snowy Cascade Mountain Range.

On that trip to Thunderhill, I experienced temperatures ranging from 60 degree + during the days, then around the freezing point while crossing The Grapevine late at night. The bike I was riding — the Honda CB500X — provides no protection for your hands against the wind. Aided by a pair of Aerostich Silk Glove Liners, the Luxury Cowhide Winter Gloves remained comfortable throughout, providing just enough insulation to last the 30 minutes or so it took to cross The Grapevine in low-30s temperatures at highway speeds.

The Ural didn’t include hand protection either. And a friend lost my glove liners last weekend (you’re a dead man, Ty), so the Cowhides were the only thing between me and temperatures in the high 20s while riding in The Cascades. Luckily, that ride was largely spent at much lower speeds as we were riding through deep snow. Because wind chill wasn’t as great a factor, the gloves were just enough to keep my fingers from freezing up there, too.

In less frigid conditions, you’ll notice how comfortable the gloves are first. Putting your hand into them is like pulling on a favorite old cashmere sweater. The insulation pile is incredibly soft and there’s no internal seams or ridges to bind or chaffe your hands in any way.

That pile is composed of hollow nylon fibers. As you know, insulation is provided by dead air space, so those hollow fibers are what make these gloves so warm.

We haven’t had a chance to test their waterproofness in a prolonged rain storm, yet.

Warmer than any other non-heated motorcycle gloves I’ve ever worn, by about 10 degrees.

With most of the insulation on top of the hand, feel through the underside of the palms and fingers remains good. You’re still wearing bulky winter gloves and not race gauntlets, but you can feel the controls and the gloves don’t get in the way.

Unbelievably comfortable. You’ll want these on your hands as often as possible.

Quality construction is visibly evident in the stitching, materials and hardware.

Quilted knuckle detail adds some protective padding and a lot of good looks.

Overall impact protection is limited. There are no palm sliders, not much protection is offered by the knuckle quilting and there’s no other armor of any kind.

Both the gauntlet cinch and retentive wrist strap suffer from a limited range of adjustment. Fine when wearing a bulky jacket or Roadcrafter, but you won’t get the gauntlet tight over something very thin.

Unlike other Aerostich gloves, there’s no visor squeegee on the finger.

Extremely warm and very good looking, the Aerostich Luxury Cowhide Winter Gloves are also comfortable and made to the high quality standard we expect from the brand. Some riders may prefer more impact protection, but if you don’t mind going without, these gloves are as good as it gets for cold weather riding.