Watson On: Obstacles In The Road 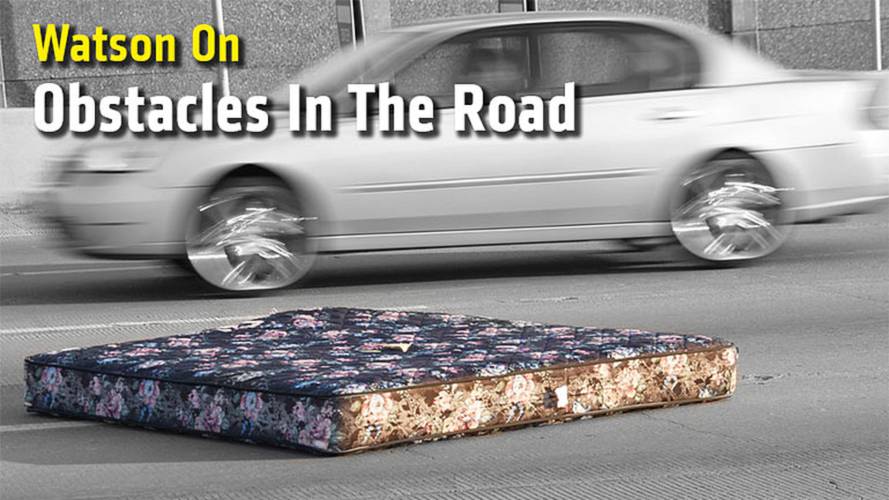 Every one of us who rides should know the risks that are involved every time. Let's talk about obstacles in the road...

Every one of us who rides should know the risks that are involved each and every time you swing a leg over a bike and head out. Aggressive, texting drivers and crazy traffic are just the tip of the iceberg, so you’re constantly forced to ride defensively. It often feels like everyone is out to get you and they probably are.

But there is another dimension to all of this because being a motorcyclist means you become a target for some very odd things. A few years ago I came around a corner to find that a produce truck had deposited its entire load of watermelons in the road.

The melons had broken free just a few seconds before I arrived so I was faced with what looked like massive, green cannon balls rolling all over the place. The first melon struck my bike’s front fender and the second clouted me on the knee. It was like being hit at 40 mph by a very hard medicine ball and for several days afterwards I had a purple bruise on my leg to show for the melon attack.

All around my bike was a moving obstacle course of bouncing fruit.  I had to pull over pretty quickly and park my bike until the swirling mass of melons had come to complete stop. The guy driving the truck was apologetic and for the next few minutes I helped him kick the melons to the side of the road. Other drivers were less helpful and forced their way through the sea of melons glaring angrily at us for daring to hold them for a few seconds.

Another time, early one Sunday morning I pulled up at the lights alongside a young guy in a Ford Mustang who was playing loud music that was blaring out of the open windows. He looked across at me and nodded and had a cigarette between his lips. As the lights changed we both moved off together. He was clearly not going to hang around and accelerated away from me. A few seconds, later that cigarette he had been smoking came arcing through the air. It hit me in the chest and then fell down into my crotch trapped between the top of my bike’s saddle and my gas tank. That sort of thing – a lit cigarette butt - really focuses your attention when you’re riding and for me the carelessness of Mustang Man’s actions made me lose a little more faith in humanity.

My real pet peeve though is people who spit chewing gum out of the windows of their moving vehicles. I’ve had this happen to me a couple of times. The first occasion I saw the fat glob of spittle and gum come barreling out of the open driver’s window of a passing car I instinctively ducked making my bike veer across the lane I was riding in.

That previously enjoyed lump of gum still got me though and thwacked itself onto one of my saddlebags and sat there like a glutinous sticky lump of nastiness. I’m not a big fan of spitting in public places at the best of time but come on people doing this from your car seat, while in traffic, is truly disgusting.

The freeway always provides a near endless succession of interesting things that can have you off your bike in the blink of an eye. Pieces of exploded tire rubber really hurt when they are flung out from the rear of a vehicle you’re following. They’re also not a good idea to ride over. Ladders are mere obstacles to try and weave past, as you’re not going to have enough time to get your bike correctly positioned to ride straight over one. This means you have to take your life in your hands and dart into another lane and pray that you’re not going to hit the car that is now speeding up alongside you.

But I have to admit that a Queen-size mattress in the central lane had me and the other freeway users rushing for the same clear lane all at the same time. I and my bike just made it but it was close and I had to pull off at the next off ramp to calm down because it had scared me that much.

On the upside as a motorcyclist you do find some ‘interesting’ things in the road. In recent years I have stopped for a wallet complete with driving license and $76 in cash, which I think a fellow motorcyclist had lost. I handed it in to the police to return to the owner. I have found two hammers, a gremlin plush toy and would have stopped for a rather fetching baseball hat but was trying to overtake an 18-wheeler when I spotted it blowing around in my riding lane.

Many years ago I found my riding abilities really challenged when I came into a small town. There was a long downhill straight and then a sweeping left hand curve. A large truck had either ben traveling too fast or its brakes had failed. It lay on its side taking up both lanes of traffic. The driver was ok and standing by the side of the road waiting for the emergency services to arrive.

But that was only the first part of the problem. The next issue facing me was the truck had been carrying a load of live chickens. The impact had caused most of the crates on the truck to burst open and the road was now littered with chickens all trying to make a concerted dash for freedom. There were literally hundreds of them.

Trying to bring my bike to a halt amid a flurry of feathers, beaks and darting chickens was no easy task. I managed it somehow and sat there in a surreal world of escaping chickens wondering to myself why on earth I ride a motorcycle.

What is the craziest thing you’ve come across, darted around or been hit with on the road while riding?