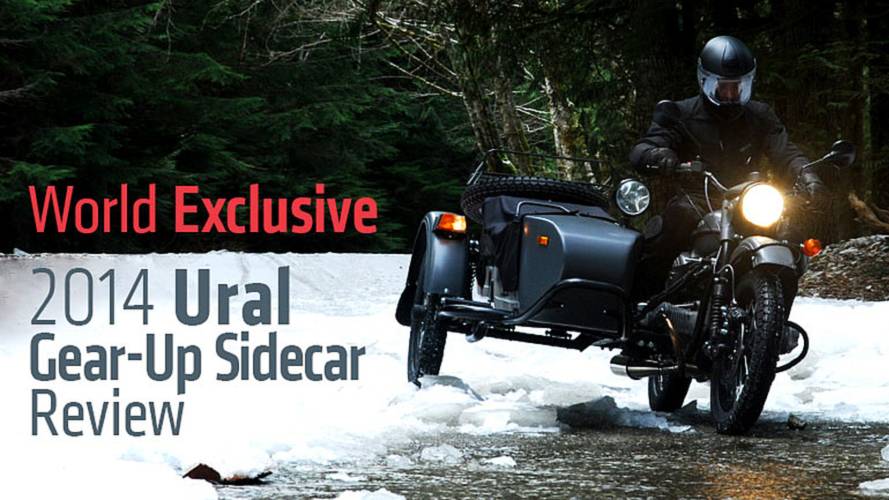 The 2014 models have finally fixed the performance problems Ural has suffered in the past. Read more in our world exclusive 2014 Ural Gear-Up Sidecar review

Until now, riding a Ural sidecar has been an exercise in survival. With engineering dating back to before the Second World War, things like performance, handling and braking were, in lieu of a clever analogy, just plain terrible. For the first time fitted with fuel-injection, disc brakes on all three wheels, a hydraulic steering damper and dozens of other changes, the revised 2014 model range is supposed to fix all that, dragging these classic bikes into the realms of modern performance and safety. Can they? Find out in this world exclusive 2014 Ural Gear-Up Sidecar review.

An awful lot. To its classic 749cc boxer-twin, Ural has fitted fuel-injection. It’s a clever system equipped with an ECU for each cylinder, with the pair talking to each other to maintain a balanced idle. Such a setup also builds in redundancy; the bike will still run even if one ECU is knocked out.

That fuel-injection combines with a new camshaft profile and larger airbox to boost power and torque, while also creating an incredibly flat torque curve. With all-metal bodywork and, well, a gigantic metal sidecar hanging off the side, the Ural is a heavy bike. So it needs that torque.

As an interesting aside on weight, this gigantic, three-seat, Siberian-made, all-metal contraption weighs in at 730 lbs (dry), which is 40 lbs less than the lightest bike (the Road King) in Harley-Davidson’s “Project Rushmore” touring range. It does that while carrying a spare wheel and tire, shovel, jerry can and spotlight, and while making enough room to take your dog along for the ride. It even fits a reverse gear.

Back to the topic at hand. A total gain of one horsepower and three pound-feet over the carb’d bike may not sound terribly impressive, but a Ural employee confided to RideApart that these new numbers are honest, whereas the old were…optimistic. The changes also net an improvement in fuel economy from 26 mpg highway/33 city to 31/37 and up the useful highway cruising speed from 65 to 70 mph.

In addition to improving acceleration, Ural also set out to increase braking power by replacing the rear drums with discs. While the motorcycle wheel is clamped by a Brembo caliper, the sidecar wheel makes do with a Hayes Braking caliper. Why? Apparently Can-Am was worried about the Russian competition and told Brembo not to sell the third-wheel setup to Ural. Both rear calipers are operated by the same foot lever.

Swapping the brakes also allowed Ural to redesign its wheel hubs. Not only are they now substantially lighter, but the drive splines are now bolt-on affairs, allowing for replacement and servicing. Before, you’d have to replace the entire wheel hub. A new final drive housing also sheds additional weight.

We’ve saved the biggest upgrade for last. Old Urals used an archaic friction-type steering damper that was mounted on the steering head. A sidecar has a natural tendency to turn right while accelerating and left while decelerating, a “feature” that has led to instability and which required massive effort on the rider’s part to maintain a straight line of travel. The new hydraulic damper (as found on many modern sportbikes), halts the initialization of those movements, whereas the old mechanism merely turned down their severity after the vehicle was already wobbling. If you haven’t ridden a Ural, you may not understand what an enormous change this represents, drastically reducing rider effort while massively increasingly stability and rider confidence. This change alone makes the 2014 bikes feel like totally different machines.

I’m not ashamed to admit that previous Ural sidecars have scared me silly. Particularly after crashing two summer ago and breaking my wrist. That injury has led to a permanent crooked “arch” in my front forearm. If these new bikes really can be safer and more rider friendly, then I’m the best possible test of those merits. Heck, I get nervous just sitting on a sidecar at a standstill.

So, suiting up with every last item of warm clothing I own, before heading out of Redmond, Washington for the Snoqualmie Pass in search of snow, I was sweating bullets not just because Ural keeps its garage ridiculously warm, but because I was afraid there was a real chance I might get hurt.

And that’s the way I would have stayed, had this been a ride on any previous Ural. I was so nervous, in fact, when I rode one in Siberia that I rode it straight into a snow drift not 100 yards after we set out. But this bike is different. A few circles in the parking lot, beginning with left-handers (obviously), then moving on to the much more challenging right and I was nearing something resembling confidence.

Out on the main roads, headed for Snoqualmie, that continued. I was able to keep up with one of Ural’s mechanics-cum-test rider (on an old bike) without issue and never once worried that the sidecar was about to flip over and kill me.

Cruising on the highway at an indicated 65 mph was positively relaxing, with the bike cruising effortlessly in a straight line and even remaining planted as we passed (yes, passed!) 18-wheelers and encountered their wind blast. And, on hairpin mountain turns, even right hand ones, the bike remained sure-footed and confident.

Most of that is simply down to the hydraulic steering damper. Its effect is marvelous. Roll off the throttle on a straight road and, if you’re really paying attention, you can detect a slight yaw, but the damper totally prevents the initialization of anything approaching a sway or a wobble. Accelerate hard away from a stoplight and the Ural tracks nearly true. The difference from this one change alone is night and day.

The other huge difference occurs when you start the bike. Push a button and that’s it. Ah, fuel-injection. Where the temperamental old engine liked to be showered with love and attention before rewarding you with controlled explosions, this new one just starts on the button. No matter the altitude, no matter the temperature. As an added bonus, there’s no more petcock; if you’re running low on fuel, a yellow light illuminates in the dash.

The other advantage of the engine upgrades is obviously in performance. Following a last-generation Ural up a steep slope in deep snow, I was consistently able to pull a higher gear on the new bike or hold a single gear through sections that required multiple shifts on the old model. That ultra-flat torque curve illustrates the engine’s performance perfectly; it’s flexible and easy going to the old model’s asthmatic peakiness.

Don’t get me wrong, this is still a 41 bhp, 750cc, air-cooled boxer twin that weighs over 700 lbs, but riding it is now a straightforward, user-friendly affair, if still a slow one. You’ll work less to get where you’re going, the engine will stall only if you make it stall and it performs on the highway in a much more comfortable manner.

Sadly, I can’t testify as to the efficacy of the new brake setup. The bike I was riding was badly in need of a lever adjustment, something I didn’t discover until we were well on our way for this day-long test ride. To engage the rear brakes, I had to stand on the pegs and rotate my right foot as far-forward as possible, something the company assures me is as far from normal as possible. They still have quirks, these classic Russian bikes.

That’s the changes out of the way, the rest of the riding experience is pure Ural. The bike is now much more user friendly without compromising any of its capability or character. It’ll still pull itself uphill, through deep snow with 2WD engaged. It’s still engaging and satisfying to ride, even cruising down an empty highway at 55 mph. It still requires unique skills, a lot of patience and a unique attitude to transportation that prioritizes experience over speed.

Stability is dramatically improved over old models, almost to the point where it inspires confidence.

Engine performance increases by an equal measure, becoming much more useable in the process.

Starts at the push of a button, but still comes fitted with a kick-starter.

Goes further than pretty much any other vehicle off-road or through challenging conditions.

More engaging at 65 mph than modern sportbikes are at 165.

Room for your dog and all the supplies you could ever need.

No more adjustments needed for riding at high altitude.

While the handling is vastly improved, it’s still not “safe” by modern car standards. You need to know what you’re doing and pay attention in order to operate one.

Solo seat on this Gear-Up is the least comfortable option.

One-wheel drive Urals will start at $12,400 in 2014, going up to $16,00 for the two-wheel drive Gear-Up seen here. That’s an awful lot of money for something with such limited performance, but the Ural is also an absolutely unique vehicle, existing outside the normal motorcycle or car continuum. If you want one, you want one, there is nothing like it.

Vastly improved, but still a quirky, classic vehicle which dates back to a war our granddads fought. Think of it as Russia’s version of the Willy’s Jeep. One that’s still on-sale today, benefiting from the reliability, quality and safety that modern engineering can add. Is experience more important to you than performance? Do you want to have epic adventures in the middle of nowhere and take your dog along for the ride? Do you believe you can have as meaningful a relationship with your bike as you can with a human being? Then a Ural is for you. From 2014 forward, that circle is just going to include a lot more people.