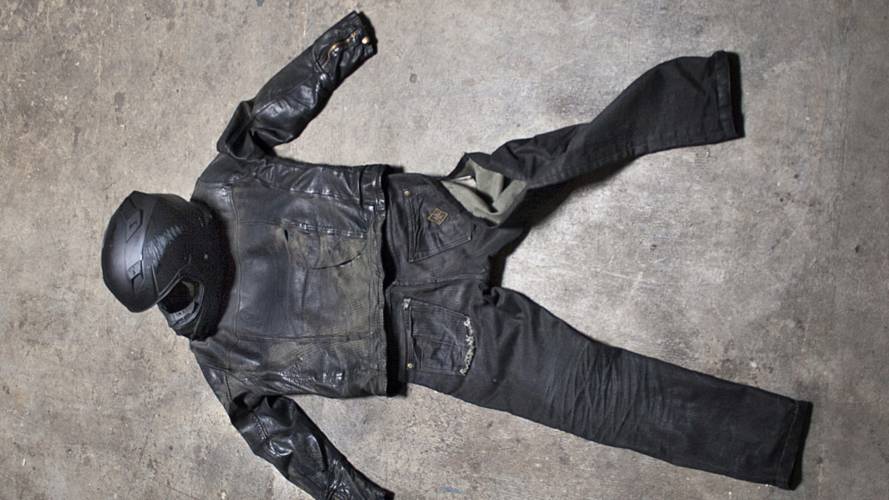 Crash Tested: Stylish Safety GearOur friend Scott is what most people would consider a stylish young man. The other day, he had a 70mph get off in...

Our friend Scott is what most people would consider a stylish young man. The other day, he had a 70mph get off in the kind of gear that works almost as well on a bike as it does in a bar. Did the skinny jeans and the armor he stitched into a jacket himself actually hold up? — Ed.

Well, I'll start this off by saying I've been riding for a good number of years now. Anytime I've gone down I can't say I wasn't asking for it in some regard, whether that's on a track, in a canyon, or hitting jumps in the dirt. I'd have to say this is one that could happen to anyone and it's not one you can plan for. That being said, this is the exact kind of situation in which you need to rely on quality safety gear.

I was riding down Los Angeles' 110 freeway on a Saturday. Very little traffic, beautiful weather, everything flowing nicely. One of those days that's great on two wheels. My exit is coming up, so I make my way over to the slow lane with about a mile to go. Next vehicle in front of me is quite a ways ahead. As I check my rear view mirror there is a sudden pile up in front of me. The moment I look back up, all I see is the back of an SUV. I don't know if I even had time to use my brakes before the impact. It was simply that fast.

When I hit the back of the SUV, I was traveling approximately 70mph. After the first impact, I flew over the top and to the side, doing a big front flip. I landed square on my back slid to a stop, traffic screeching to a halt and swerving in every direction. As I lay in the road, I couldn't breath, I couldn't move. Within a few moments shallow breaths come back and I'm able to pick myself up off the road. To my complete surprise (and that of the responding firefighters) I am relatively unharmed. Now lets talk about the gear and how that might have happened.

This thing lists for $129.95 MSRP. I picked this up recently for dual sporting trips, but it's a surprisingly nice helmet and fun to wear, especially in pleasant weather. It carries a DOT safety rating and more importantly ECE 22.05, which is good enough for MotoGP. It most certainly did its job, taking a good amount of abrasion on the and sides. A long portion in the rear of the helmet also kept my head up as I slid on my back. In the end, no headache or concussions in a 70mph impact.

Will I buy again? Definitely.

This is what I would refer to as "fashion leather", not the thickest or tuffest stuff you'll find. The strength of the stitching, while high quality is questionable when considering the kind of forces you'll experience in a motorcycle crash. Hell For Leather did a great piece on adding proper armor to jackets. I took that idea added D3O armor which is light and flexible but stiffens on impact. Not the armor you'll find in a race suit, but a nice compromise. The D3O was stitched into the shoulders and elbows. Two points that are almost guaranteed to take some heavy hits when you go down. I kept meaning to put a back protector in but never got around to it. Take it from me, do it. My back is what I landed on after hitting the car and let me tell you, I hit it hard and fast. I really wish I had some protection there. I had some bruising that was about as deep as you can go before it becomes a hematoma (large pocket of blood under the skin). While the leather saved me terrible and certain road rash from the rough asphalt, I still sustained some rash which wasn't pleasant as it healed. If the leather was thicker or there was a back protector there I doubt I would have any at all. As the photo shows, the leather actually tore on the right side. I'm assuming the stress of sliding so hard on the left slide was too much, causing it to tear on the right. If this were a proper motorcycle jacket that wouldn't have happened. Luckily no injuries were sustained from this, but luck is a big theme in this story.

Will I buy again? No. It did it's job for the most part and I am thankful for that, but it also failed in some big ways. I'm opting for something with proper, thick motorcycle leather. You can get this in a classic look from brands like Schott, Vanson, and Lewis to name a few. Having good armor in the right spots made a big difference but that's only half of it.

These jeans are a great fit, thick denim with kevlar woven in. I've really loved these jeans and run through just about everything you could imagine in the past year, now including a crash. I've waxed them for added weather protection. As you can see they did a really phenomenal job. Zero rash. That's the exact effect we're looking for. I had some seam splitting on the opposite leg same as the leather in the jacket. No injuries were suffered from this so while it's not the best thing, they still did their job and I plan on repairing and continuing to wear these.

Will I buy again? Yes, love these jeans. Worked great.

These aren't quite a motorcycle boot per say, but a compromise. They're 1) sturdy, 2) made of quality thick leather, and 3) cover the ankle. But that's about where the protection ends. While they offer resistance from abrasion they don't offer anything for impact or keeping your foot from twisting in a tumble. A very common injury that can cause quite a bit of damage, fast. In the photos you can see that the left boot has some heavy scratches. I did hit my ankle coming down and that caused a good amount of bruising and left me with a slight limp that's still with me a week later. If I were wearing proper motorcycle boots that would have not be the case.

Will I buy again: While there was definitely some luck involved here, they still did a good job of keeping my feet pretty protected. A proper motorcycle boot would have prevent any injury whatsoever.

There's certainly a lot to consider when choosing what to wear before you throw a leg over a bike. Whether that's at a race track, a fast canyon, daily commute to work, or a run to the grocery store. Each rider must educate themselves across the spectrum of safety gear and understand what’s best for them, weighing the pros and cons of each choice. That being said, I feel incredibly lucky to have sustained the minimal amount of injury that I did in what's considered a potentially deadly accident. I’m lucky, but also grateful for the protection I had. No two crashes are ever the same, but hopefully this gave some perspective on the different kinds of protection available and how they perform in a real world accident.