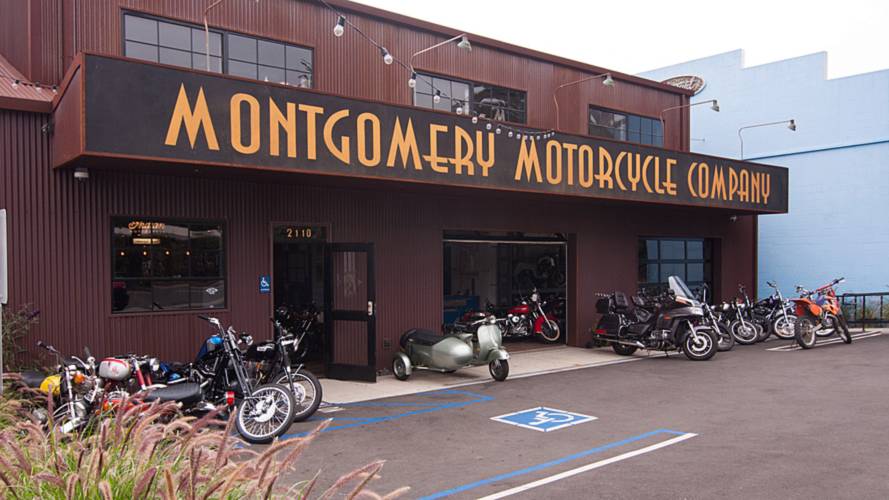 Reinventing The Montgomery MotorcycleA famous British motorcycle name from the past could be on its way back thanks to a southern California company,...

A famous British motorcycle name from the past could be on its way back thanks to a southern California company, which has ambitious plans to begin making and selling Montgomery motorcycles again.

Mark Williams and Blake Washington co-founded their business, the Montgomery Motorcycle Company, two years ago. They own the name, trademark and the rights to what was once considered a very exclusive British bike company. The pair hope that within the next 12 months to have a motorcycle on sale again bearing the Montgomery name after an absence of more than 60 years.

Montgomery Motorcycle Company opened its doors last November in San Clemente, in a former transmission shop. That shop was set up by former construction company owner Williams and Washington, who is a friend of Williams’ son, after they started building motorcycles together.

“I worked in the construction industry for many years for most of the well known studios up in Hollywood, building studios and film sets including the Baja California lot for the 1997 film ‘Titanic,’” explains Williams. “But I have always had a passion for motorcycles, particularly the old British bikes.”

“Blake and I decided about three years ago to build a bobber together and things just grew from there. We bought an old BSA 650, oil-in-frame, and started working on it and fabricating parts and were really pleased with the way it started to turn out. We thought, ‘hang on a minute we could start building and selling our own bikes’ so we began looking for premises.”

At the same time they looked to see what they could call their motorcycle and discovered that the Montgomery name was available and they bought the trademark and rights to this once famous British company.

Originally Montgomery was a manufacturing and engineering firm that was created in Hertfordshire, England, in 1913. It became known for being innovative and producing interesting, high quality motorcycles. Company founder William Montgomery is credited with creating the first motorcycle sidecar and also raced his own Montgomery sidecar combination in the 1923 Isle of Man TT.

The company’s first bike in 1913 was a flat twin using a Morton & Weaver engine, but all other parts with a few exceptions were designed and made in-house. Montgomery specialized in developing its own frames and forks and earned an enviable reputation for the quality of its work even leading to Brough Motorcycles – makers of the iconic Brough Superior – using Montgomery frames on its bikes.

During the 1930s, Montgomery continued to make quality two-stroke and four-stroke motorcycles, culminating in the Montgomery Greyhound – a 680cc V-Twin. But, the outbreak of the Second World War brought production to a halt and the company ceased trading.

“When we were looking for the right name we specifically wanted something that reflected the nostalgia element. Something that was from the classic era of British motorcycles and Montgomery seemed to be the perfect fit. Like us, it was a company that used other people’s engines but developed its own frames and forks,” says Williams.

“We have used a 1970s BSA oil-in-frame as it’s easy to work with, readily available and we can alter it to suit our needs,” says Williams. “We have fabricated the tank and got a look we really like and created the bars similar to those you would expect on a vintage motorcycle and used a leaf spring front suspension with a hard tail rear end. The next stage is to get the bike up and running, but we have been somewhat distracted with getting Montgomery Motorcycle Company underway.”

Aside from wanting to build and sell their own motorcycles, Williams and Washington have opened a shop that specializes in buying, selling and servicing classic British and American bikes. They opened the doors to the Montgomery Motorcycle Co. store last year and it’s a place that has a really cool vintage environment selling retro gear and with a wide range of classic bikes for sale, from a 1924 Indian Scout, a 1950 Triumph 500 Trophy, to a1971 BSA Lightning.

“We kept a lot of features from the old transmission shop such as the old lifts that are now coffee tables in the customer area of the showroom, but basically it’s a new building with a classic feel. We specialize in selling older British and American motorcycles, but will consider any motorcycle if it’s interesting.”

“We got so busy selling and sourcing vintage bikes and inundated in the service department, where we’ll work on any bike up to 2013, that our plans to build a Montgomery motorcycle took a bit of a back seat,” explains Williams.

With the store now up and running Williams and Washington feel they are back on track and plan to start sorting and developing the rolling prototype of their first Montgomery motorcycle. They hope by the end of this year to have a production Montgomery model up and running.

“If someone came in today and wanted us to build them a Montgomery,” says Williams “We think we could do it within three to six months. Our aim is to make only a limited run of around 10 in total. All will use the BSA oil-in-frame set up, which we will develop, and there will be certain things on the bike that will be distinctly Montgomery like the front end leaf suspension and forks, bars and risers and the tank design.”

“Customers will get to choose either a BSA or Triumph 650cc engine but they are ostensibly the same motor. Thereafter we will fabricate anything the customer wants to make the Montgomery their bike.”

Montgomery Motorcycle Co has the capability and skills to fabricate everything in-house and will build all the Montgomery bikes at its San Clemente store.

Aside from the Montgomery, Williams and Washington also have plans to build a road legal ‘board racer’ style motorized bicycle similar to a 1910-1915 Indian. The engine would be a 2hp v-twin and could cost around $4,500.

“We’re serious about this project too,” added Williams. “We think there would be a lot of interest in having a road legal motorized bicycle that looks like something from the early 20th century. It could be a lot of fun.”