How To Save A Motorcycle Slide 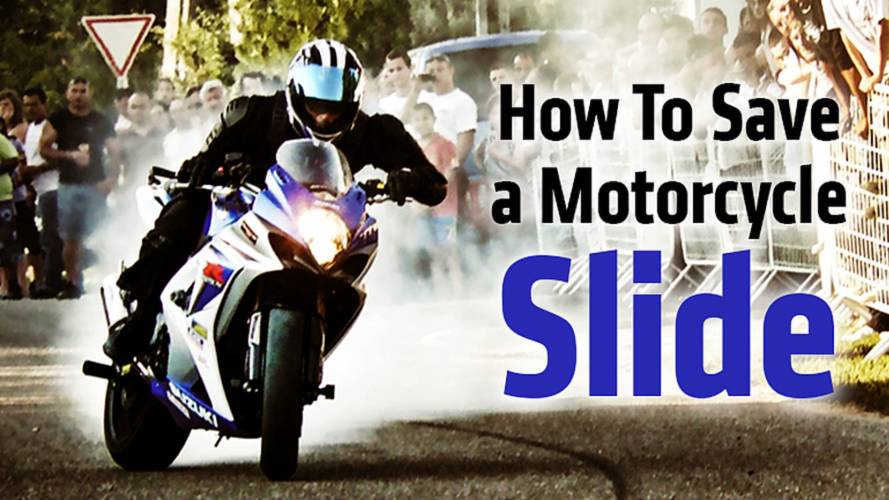 Wet leaves, manhole cover, melted tar snake or just too much throttle and the rear steps out. Here’s how to save a motorcycle slide.

You’re accelerating when, suddenly, the rear wheel loses traction and steps out. Wet leaves, manhole cover, melted tar snake or just too much throttle. What can you do about it? Here’s how to save a motorcycle slide.

That’s right, nothing. Don’t react. Nine times out of 10, the bike will simply correct itself. If you allow it to. If you close the throttle too quickly, you run the risk of the rear tire regaining traction too quickly, potentially causing a high-side while also shifting the motorcycle’s weight balance forwards, exacerbating the slide itself. If you counter-steer too much, you risk over-correction. Believe it or not, but a bike’s trail will actually cause it to naturally steer into a slide for you. And if you hit the brakes? Well, applying the front brake would likely cause the sliding rear to overtake the front wheel and applying the rear would likely lock that tire, cutting the gyroscopic stability it lends the machine and thereby increasing the odds the bike will end up on the ground.

2. Be The Cheetah Tail

Channel that scene from The Matrix. You know, the one with the spoon. Just here you turn your body into the tail of a cheetah. The big cat uses its long, heavy tail as a counter balance, helping it change direction quickly and to retain stability during extreme maneuvers. If you’re hanging off the bike, allow it to move around freely underneath you while you hold your body relatively still. This helps the bike “find” the right direction to go in.

If you do anything, do it gently. Sometimes, modest deceleration will bring things back into line, but this transfers weight off the rear wheel. Others prefer acceleration, which transfers weight rearwards. The general theory being that, unless you hit zero-traction ice, you have some grip and some ability control the bike’s steering, speed and angle of slide, despite the spinning rear wheel. But, controlling a slide with the throttle takes a deft touch and lots of skill, which requires practice.

4. Look Where You Want To Go

Don’t focus on the ditch or the oncoming truck, look towards the corner’s exit, where you want to be. This works for all riding situations you may find yourself in, but if the bike is moving around underneath you, it becomes doubly important. Consciously force yourself to focus on where you want to be and your subtle body movements in response will help the bike find its way there.

Want to slide-proof your riding? Go practice doing it. Any old dirt bike will do, allowing you to practice slides at a fairly low speed in a much safer environment than on the road. Want to go further? Try flat track racing. That’s about the lowest-cost form of motorsport there is and about all you do is slide. That’s how MotoGP greats like Nicky Hayden and Valentino Rossi practice, too.