The All New Porsche Experience Center: 8 Reasons Why You Must Experience It 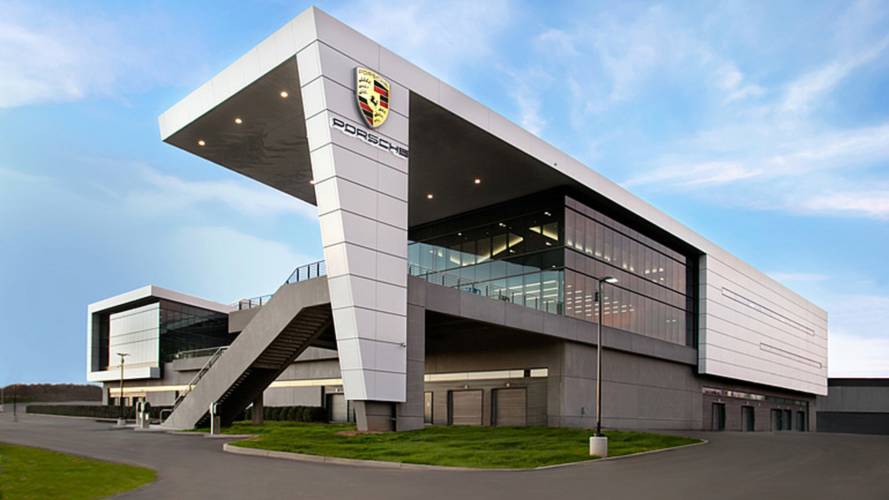 The All New Porsche Experience Center: 8 Reasons Why You Must Experience ItPorsche Cars North America recently moved into a new corporate...

Porsche Cars North America recently moved into a new corporate headquarters next door to Atlanta’s Hartsfield-Jackson International Airport. One Porsche Drive houses PCNA’s corporate offices, Porsche Financial Services, a conference center, a classic Porsche repair and service shop, and most importantly the first Porsche Experience Center outside of Europe. Since America is still Porsche’s largest market (though soon to be overtaken by China), the new digs are suitably impressive in a James Bond villain’s lair style that $100 million buys.

We were lucky enough to be among the first group let loose on this veritable Disneyland for petrolheads and Porschephiles—perhaps Orlando would have been a more appropriate venue. To make everything just that little bit more special, the kind Porsche folks rolled out a selection of 911 Carreras, Caymans, Boxsters and Panameras in range topping GTS spec (more power and lots of ticked option boxes) from their fleet of eighty cars for us to romp on in an extended remix version of what is on offer to the general public.

You too can now experience the Porsche Experience (www.porschedriving.com for details on how) and here are eight very convincing reasons why you should. Even if you don’t bleed petrol…

If you have the very first world problem of deciding between a rear engined Porsche 911 Carrera or the mid-engined Cayman or Boxster, this is a good place to try them out back-to- back. Actually, this is a major reason for the PEC’s existence—to help with buying decisions.

Designed to mimic tighter country or canyon roads, the 1.6 mile course features moderate elevation changes, slow and fast corners, and enough straightaway to get those signature flat-six motors howling. Tightly surrounded with slightly intimidating Armco barriers, there isn’t much room for error, but—as with the rest of the PEC—an instructor in the passenger seat offered pointers for the safest fast way around. Going back-to-back in a Cayman GTS and 911 Carrera 4 GTS, I now know which flavor of Porsche I want. Call me old fashioned, but as amazingly balanced and perfectly fine-tuned as the Cayman is, the faster and more lively Carrera won me over. Plus there are back seats for the kids...

Given the Porsche Cayenne’s sleek styling and ubiquity in the city, it's easy to dismiss Porsche’s most popular vehicle as a soft roader. One lap of the PEC’s Off Road Course will quickly change that notion. Twenty-one off road obstacles, including a 1.1 ratio hill climb and a forty five degree vertical descent challenge that had us standing upright in the footwells, demonstrate that the Cayenne is truly off road ready.

The Cayenne Diesel, with its hill crushing electric motor-like torque, was more appropriate for climbing, water crossing, and railroad tie stomping than a GTS model, but the instructors assured us they’d successfully completed the course in a full boat Turbo S model. Impressive, eye opening and a lot of fun.

If you’ve ever had the pleasure of the rear end of your car swapping around mid-turn due to black ice, then you’ll understand the concept of the Kick Plate. At approximately twenty miles per hour you drive towards a two hundred yard long pad of watered, polished concrete with a hydraulic metal pad at the beginning that is triggered to randomly shoot the rear wheels left or right. First time up in the sweet handling mid-engined Porsche Boxster GTS and I was immediately launched into a neck snapping, twice-around spin. (Note: for the sake of the experiment traction, control was completely off).

After a couple of runs with some pointers from a very patient instructor, I was able to catch the spin and actually hold a drift along the full length of the pad. The 911 GTS with a signature rear mounted engine was definitely more of a challenge to catch. I could have spent a lot of time at the Kick Plate trying to master it.

Take a big, wide, and long swath of tarmac, add around five hundred horse power from the whopping V8 in a red on red—that’s a lot of red—Panamera GTS, engage launch control (left foot brake to the floor, right foot gas to the floor, release left foot…) and trigger neck snapping acceleration that made a few in our group want to vomit. Slalom and emergency braking only added to the potential for motion induced nausea. Hoonigan mode activated and LOLZ all around…

The challenge here was to hold an opposite lock slide full circle around a super-slick, wet, epoxy covered concrete pad. First up, we muscled a Panamera 4S that absolutely did not like going sideways until very liberal amounts of V8 power were applied while hacking at the steering wheel. In absolute contrast, the sublime Boxster GTS could be finessed with light inputs of steering and throttle,easily dancing sideways around the pad. Once you’ve got the hang of the pad, it's time to head over to the Low Friction Handling Course.

If you have ever wanted to play Drift Racer, this is the place. With a similar polished concrete surface as the Low Friction Circle, the course features a series of unique, tight curves, and a mixture of various radius types on-and-off camber corners.

After taking some pointers from the ever-present, friendly instructors, even the least experienced members of our group were drifting Cayman and Carrera GTSes. With traction control set to Sport Plus, we were safely hanging the tails out with confidence to where if we overstepped it, the electronic nannies would prevent any off course excursions. I could have spent all day doing this one...

Are you fit enough to race? The Human Performance Center offers state of the art diagnostic and training programs similar to those used by the Porsche professional race team. You too can benefit from a Le Mans winning training program.

There’s also a Driving Simulator Lab, but our favorite here was the Batak Pro machine, which is used universally by professional racers worldwide to test reaction time. Our group’s best score was in the low 70s. Formula One racers typically make 130 hits in sixty seconds and the world record is 176 hits. Search YouTube for videos…

The 356 was Porsche’s beach head into the US in the 50s and 60s. Porsche probably would not be the company it is today without the success it has enjoyed in America. Restaurant 356 celebrates the 356’s heritage. The dining room includes decor that gives a nod to 356 design influences and features a view of the PEC at eye level to the flight path in and out of Hartsfield-Jackson. With a superb Nordic influenced forage and farm-to-table menu by Chef Kyle Forson, Restaurant 356 is a mesmerizing spot to conclude your Porsche Experience.

Go to www.porschedriving.com to customize your own Porsche Experience.