Our Most Controversial Stories of 2013 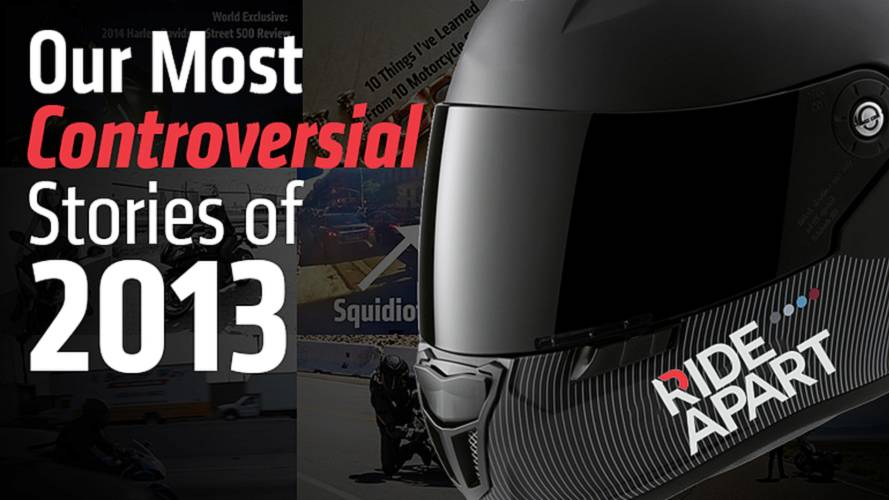 As the year winds to a close, here’s a look back at our most controversial stories of 2013.

RideApart launched in May of 2013 with the goal of revolutionizing the way you interact with the motorcycle world online. We’re well on the way to reaching that goal, but we’ve definitely ruffled a few feathers in the process. As the year winds to a close, here’s a look back at our most controversial stories.

The Story: We’re not the biggest fans of the really heavy, really expensive ADV bikes. You know the ones. So, we headed out to Nevada to do a two-day, off-road rally with AltRider and Jimmy Lewis and we decided to prove a point by fitting the humble NC700X with off-road tires.

Why It Was Controversial: It went against conventional wisdom and marketing-driven groupthink. If magazines and ads and TV shows tell us enormously heavy touring bikes are good off-road, then they must be. Right?

Our Take: Point proven. The Honda’s relatively light 470lbs curb weight combined with its diesel-like torque and very low center of gravity to delivered a far easier ride than any big ADV bike at the event. That ease of use more than made up for the limitations brought by the 17-inch, non-spoked wheels and the relative lack of suspension travel.

Why This Harley Will Be My Last

2) Why This Harley Will Be My Last

The Story: Harley-owner and RideApart Editor-at-Large Tim Watson has had enough of Harley-Davidson’s poor customer service and lackadaisical dealerships. Those factors combined with unprofessional actions from the company’s PR department have made him so frustrated that he has decided to swear off the brand for life.

Why It Was Controversial: It’s a rule of motorcycle journalism that mentioning the word “Harley” in an article ups its controversy quotient by a factor of 10. (May actually be a factor of 12 - Ed) There, just by typing that, we’ve already lured several dozen (insert political affiliation of choice here - Ed) members into the comments section (several of whom will even figure out how their computers work and will manage to make a comment), who are ready to crank out vitriol-filled screeds once they are done talking about top-secret Chinese naval maneuvers.

The Story: We profile a Victoria’s Secret model who rides around LA on an R6. A famous skater shot the photos.

Why It Was Controversial: As you might guess, Amber is quite pretty. We figured a little profile piece on someone you wouldn’t expect to ride a motorcycle, and actually riding one for real, would be interesting, but a lot of people found it to be sexist.

Our Take: Lighten up. You see pretty people on TV, in magazines and on websites because you, dear reader, want to see them whether you admit it or not. (Bet you are clicking through to read the full story right now.)

The Story: Riding unfamiliar bikes day in, day out, for work, often in less than ideal conditions and under pressure to perform means that you’ll fall off once or twice. In doing so, we’ve accumulated a little wisdom, shared here.

Why It Was Controversial: For some reason, other motorcycle publications have never really discussed all the crashing that’s just a natural part of the biz, so our honesty is, surprisingly, novel. It also seems as if many riders would prefer to think such events will never happen to them or that the fallout will somehow be different.

Our Take: This is as real as it gets. As riders, we’ve all chosen to do something incredibly dangerous, so we’ve chosen to accept the consequences. The sooner you accept that, and prepare for it, the better equipped you’ll be to deal with getting hurt. So wear your safety gear and practice your technique kids. Read It Now >>

The Story: You know the story. A bunch of poseurs in New York attacked a family in a Range Rover. Only novel thing was that we were the first motorcycle publication to categorically denounce their actions.

Why It Was Controversial: If you look really, really hard at this precise 10th of a second segment of the YouTube video and blow it up real big you can see that Zombie Elvis actually beamed down from space and caused the whole thing. Plus, the mob mentality temporarily made these guys go insane. (Not really.)

Our Take: We’ve all been aggressed upon by an automotive driver and know how bad it can be. Whether or not that occurred here doesn’t matter. These jerks set out on that ride in order to cause trouble and some of that trouble blew back on them. In no situation is it OK to intimidate and harm a family with a small child, period. Read It Now >>

Continue Reading: Our Most Controversial Stories of 2013 >>

You Know You’re A Real Motorcyclist When

6) You Know You’re A Real Motorcyclist When

The Story: A fun piece making fun of ourselves and our friends by sharing some of our more embarrassing Instagram photos.

Why It Was Controversial: Among the community of Internet bikers, there exists a virtual allergy to the word “real” when it comes in front of the words “biker,” “rider,” “motorcyclist,” “badass bike bro,” etc. We think the point is that we’re all, “real people.” Unless we’re just figures of some elaborate fictional construct that is…

Our Take: That was the whole point we were making, you can stop punching your keyboard now. We’re real bikers too and there’s no harm in making fun of ourselves. Read It Now >>

The Story: Harley gave one of our readers an early test ride on their not-so-big new bike. We heard about it and asked if to review it for us. Braden did a great job doing so, netting himself an ongoing position as a freelance contributor. Nice one.

Why It Was Controversial: Well, it turned out that, while Braden’s review was fair and found many good points about the bike, there were also some negatives. Actually, a lot of them. See the above explanation about mentioning “Harley” in an article, then multiply that by world’s first review, months ahead of any other publication. Yeah. (And that’s not even half of the story. – Ed)

Our Take: Look, our job is to tell you the truth, not act as a mouthpiece for motorcycle manufacturers. Doing so is actually as American as Apple Pie or, more aptly, farming manufacturing jobs out to India.

8) 10 Reasons You Shouldn't Date A Biker

Why It Was Controversial: You’re all single, it’s the holidays, and this one struck too close to home.

Our Take: There’s plenty of fish in the sea. Right now, the right girl/guy/Dakimakura is out there waiting for you to find her. Go get ‘em, tiger. Maybe post Heather McCoy's follow up article, 10 Reasons Why You Should Date A Woman Who Rides A Motorcyle, to Facebook and see who clicks "Like."

The Story: Have we gotten a world exclusive on every new electric motorcycle? Not quite, even if it’s beginning to feel like it. Turns out this one’s rather fast. Fast enough that it puts any gas-powered bike currently available to shame. Seriously.

Why It Was Controversial: Who are we? A bunch of tree-hugging hippies that want to rain on your foreign oil parade? Don’t we know that gasoline is the only possible way to make a bike go fast? (It’s not. – Ed)

Our Take: Yeah, it’s still got a fairly limited range (more than any gas-powered superbike’s tank range though) and costs an awful lot of money, but there’s simply no arguing that Mission has otherwise built a performance motorcycle that’s superior to gas in that most important metric: performance. Don’t believe us? Ride one. You will be converted, we promise. Read It Now >>

Why Motorcycle Lane Splitting Is Safe And Good For Everyone

10) Why Motorcycle Lane Splitting Is Safe And Good For Everyone

The Story: For an episode of the  RideApart TV show, we delivered what we think is the most compelling pro-lane splitting argument yet made.

Why It Was Controversial: Would you believe that some motorcyclists don’t think lane splitting should be permitted? I was honestly shocked to find that out. Reasons range from it being scary, to just not understanding the facts.

Our Take: Lane splitting is the single most compelling pro-motorcycle argument on the planet. We (yes, you and I and our leather clad friends) hold the power to solve congestion, reduce our dependence on foreign oil, and to sleep in and still get to work on time. All we need to do is get lane splitting legalized across America, it’s the single greatest factor standing between motorcycles and mainstream acceptance as a superior form of transportation. Read It Now >>