Following Kuralt: A 4th of July Recap from Witwen Wisconsin 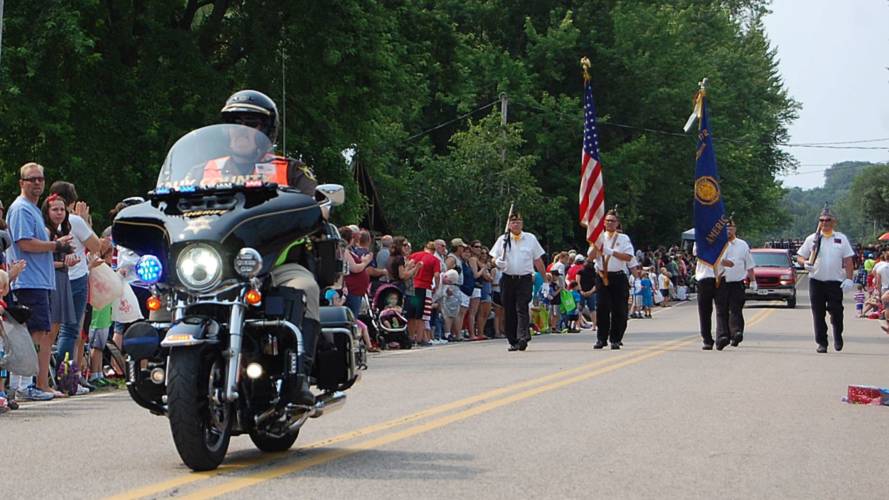 Thirty-five years ago, CBS News correspondent and consummate story-teller, Charles Kuralt decided to see the essence of the Fourth of July as celebrated in the nation’s breadbasket.

To do it, he and his camera and sound men traveled to Witwen, a tiny village in southern Wisconsin to take in the Fourth of July parade there.

As a young reporter, Kuralt covered the war in Vietnam from Vietnam—in the combat zone—not from some news bureau in another non-combatant country.

In 1967, he journeyed near the North Pole with the Ralph Plaisted snowmobile expedition, but the expedition didn’t make the Pole that year stopped by open water and bad weather.  Kuralt was the only reporter on the trip.  He chronicled that trip in his book, “To the Top of the World” and in a CBS News documentary of the same title.

The Living Flag was part of the parade back when Kuralt did his story and still is today.

Kuralt was willing to go where the story was, be it a hot, free-fire combat zone or bitter cold Arctic wilderness; of course, a lot of great journalists have done the same, but it was Kuralt’s ability to tell the story with humor, humanity and clarity that set him apart.  It was that story-telling ability that led CBS News to put Kuralt and his small entourage on the back roads and side streets of America telling stories of the people they met.

To some, next to Mark Twain, Kuralt is one of the best American storytellers ever to spin a yarn.  Unlike Twain, who lived openly by the mantra, “never let the facts get in the way of a good story,” Kuralt’s stories were as real as the people themselves.

This enormous plywood Holstein cow helps promote the Wisconsin State Cowchip Throw held in nearby Prairie du Sac on Labor Day weekend.  What are cowchips?  Yes, they are what you’re thinking and they are the real thing.

In the autumn of 1967, Kuralt was tiring of being a hard news correspondent and he approached CBS with the idea of traveling the country and sending back the stories he found.  The network agreed and “On the Road with Charles Kuralt” was born.

By 1980, Kuralt’s short stories on the CBS Evening News were seen by millions of television viewers across the country and around the world.  So, we wondered, what effect did the episode about the Witwen, Wisconsin, Fourth of July parade have on the event?  Did it spawn the immense crowds that show up every summer?  Most of all, wouldn’t this be a great destination to include in summer motorcycle touring plans?

The Cripple Creek Cloggers dance on a moving trailer and put on quite a show.

Witwen is in Sauk County in south-central Wisconsin, located on county highway E.  The entire area is laced with well-paved town, county and state highways that meander through rolling farm country and small towns.  Getting there is as interesting and enjoyable as the event itself.

We rode into Witwen about two hours before the parade was to start at 10:30 AM and thanks to being on a motorcycle, we were able to find a tiny spot to park near the Witwen Community Park where a huge chicken barbecue dinner is served right after the parade concludes.

How many people jam into the Witwen area of the parade is anybody’s guess, but it is in the thousands.

The crowd literally stretched about a half mile out of town on CTH E in both directions and the entire village was jammed with spectators.  In perfect weather, the parade came off without a hitch with all the classic elements of the Fourth of July celebration in a small town, including one featured way back in Kuralt’s story—the Living Flag.

We had a lot of company when it came to other motorcycles showing up to see the parade and parking was where you could find it—even in the remains of a farm building foundation.

After the parade the chicken barbecue dinner served in the Witwen Park right along the parade route was a great way to end the festivities before getting back on the road.

So, did Kuralt’s story make the Witwen parade the popular event is?  Not necessarily, according to long-time local residents we talked to.  Each of them said the parade drew huge crowds before Kuralt’s story—and that it was that fact that may have brought Kuralt to Witwen in the first place.  While there’s little doubt the coverage on CBS made the Witwen Fourth of July Parade more widely known, it appears most folks familiar with the event before 1980 think the size of the crowd at the event was about as big before as after.

One thing’s for sure—if you plan to go next year, try to get there early.

For more information on this, see:

http://www.travelwisconsin.com/events/fairs-festivals/witwen-4th-of-july-parade-39581 (the event information is now listed as “expired” since the 2015 parade is over, but it will be renewed for next year’s event and there are other links, as well.

No parade is complete without tractors—this one is pulling the float for the Sauk Prairie Future Farmers of America (FFA).

This Thunderbird was but one of many classic cars that made the parade.

Nothing tops off a Fourth of July parade like an old-fashioned chicken BBQ in the park.