Kickstand: 48 Years Ago Harley-Davidson Did Something Outrageous 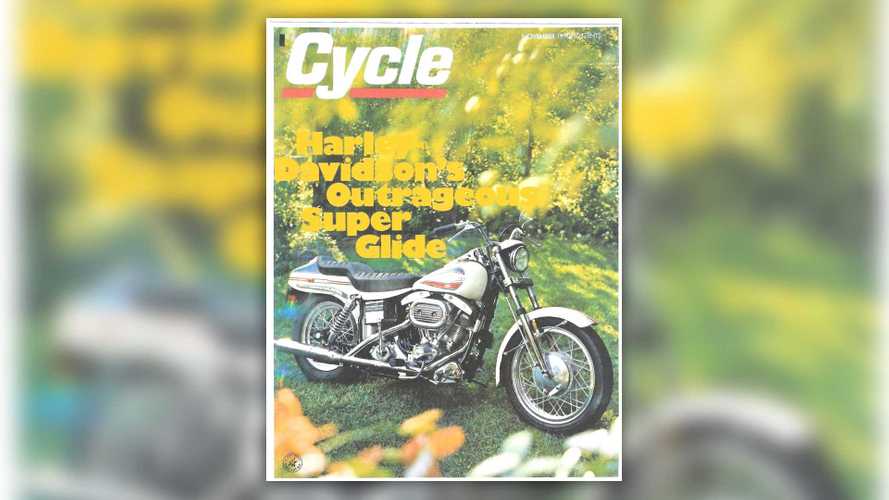 Outrageous about covers it, yeah.

Editor's Note: Hey friends, this article was first published way back in 2015. It's been updated with new, better pictures, a friendlier layout, and a bit of new text here and there. We present it, once again, for your enjoyment because the OG Super Glide rules. - JM

At an antique mall in northern Illinois the other day, I ran across something I always look for in those musty little shops: a stack of old motorcycle magazines. It made my day.  Moreover, the one on the top of the stack made quite a statement.

It was November 1970 issue of the now defunct—or at least absorbed— Cycle magazine. On the cover was an artfully posed picture of the first-year version of Harley-Davidson’s Super Glide, which went on sale in the 1971 model year, with the headline reading, “Harley-Davidson’s Outrageous Super Glide.”

That headline seemed very curious—after all, the Super Glide was basically a stripped down Electra-Glide, sans the electric starter, with a Sportster fork, fender and drum brake grafted on, a smaller battery, and that very unusual fiberglass boat-tail stepped saddle, all rendered in red, white and blue.

The Super Glide's looks were a shot across the bow of The Motor Company's staid, conservative design.

So, after buying that issue and about a dozen others, I decided to read up on that first road test of the Super Glide and find out just what was so outrageous about it.

It turns out that the styling was one of the key things leading to the term “outrageous” being in the headline.  After all, the Super Glide represented a major de-construction of one of H-D’s bedrock models—the Electra-Glide. In fact, the article used the term “savaged” to describe the way the design team lead by Willie G. Davidson at the time transformed the paunchy Electra-Glide into the Super Glide.

Styling aside, the review praised how the Electra Glide’s 690 lb. weight was pared down to 565 lb. in the Super Glide, how indestructible and user-friendly the clutch was, how well the new Bendix carburetor worked, even how well the bike handled but bashed the bike for its poor brakes, sloppy shift linkage, extreme vibration in the handlebars and left footpeg (“shakes like a palsied chicken”), poor seating position, uncomfortable seat and leaky fork seals.

Eat your heart out, Evel.

Wait—what?  Did they say leaky fork seals?  On a brand new test bike?  At first I thought that must be some sort of mistake, but no—it was no mistake. Though they must have wiped the leaking fork oil off the chromed fork legs for the shots inside the magazine, right there on the full-color cover shot is the proof: The fork legs show fork oil on them about three inches up!  Maybe they found that a little outrageous. If not, they should have.

Or maybe it was the brakes, of which the testers said, “Its brakes are an abomination, unworthy of either Harley-Davidson or the Super Glide. The bike flies. The bike handles. The bike will not stop.” That certainly is an outrageous situation for a brand new bike.

Indeed, the Cycle editorial staff apparently decided to add a little outrageousness of its own to the review; on page 26 of the magazine is an image of the test rider standing on the Super Glide’s saddle while underway. Maybe it was their bid to address the vibration problems and poor seating position. It also sets aside the question of bad brakes since you can’t use either brake when standing on the seat.

The term “superbike” also found its way into the review of that first Super Glide, but only in a prospective sense—the test bike’s best ET in the quarter mile was 13.90 sec. with a terminal speed of 96.25 mph. Whether or not “superbike” applied to the Super Glide based on quarter mile performance may be open to debate, even in the context of the available competition back in the day.

For example, in the very next month’s issue, Cycle magazine had done a six bike comparison of some 350cc bikes coming out for the 1971 model year. In the quarter mile acceleration testing, the two stroke twin cylinder Kawasaki A-7 would have been only 0.4 sec. behind the Super Glide, turning out a 14.35 sec quarter mile ET with at top speed of 91.55 mph—from an engine of less than one third the Harley’s displacement. On the other hand, the Super Glide was never intended to be a drag strip nemesis; it was built to be one of the first factory customs—a stylized cruiser.

If the comparison is stretched to MSRP, the Kawasaki’s $805.00 price compared to the Harley’s $2,200.00 sticker really would have to make a person think about the value/price equation. Unless the ring-ding rattle of an air-cooled two stroke was a loser to the deep rumble of the 1,200cc four-stroke V-twin in the ears of the potential buyer.

The review ends with a prediction that despite its shortcomings, the Super Glide would “succeed in this country like no machine H-D has ever made or dreamed of making.”

That prediction may be a little hard to back up, all things considered.  In 1971, the Super Glide production numbers show 4,700—that compares to 10,775 Sportsters and 6,675 FL/FLH models. In 1972, the boat tail was dropped and production increased to 6,500, but still paled in comparison to the 18,150 Sportsters built that year.

In the end, the '71 Super Glide was a fantastic looking but not particularly fantastic handling or performing bike. It remains an important piece of Harley history, however, for its wild design and its introduction (possibly) of the factory custom.