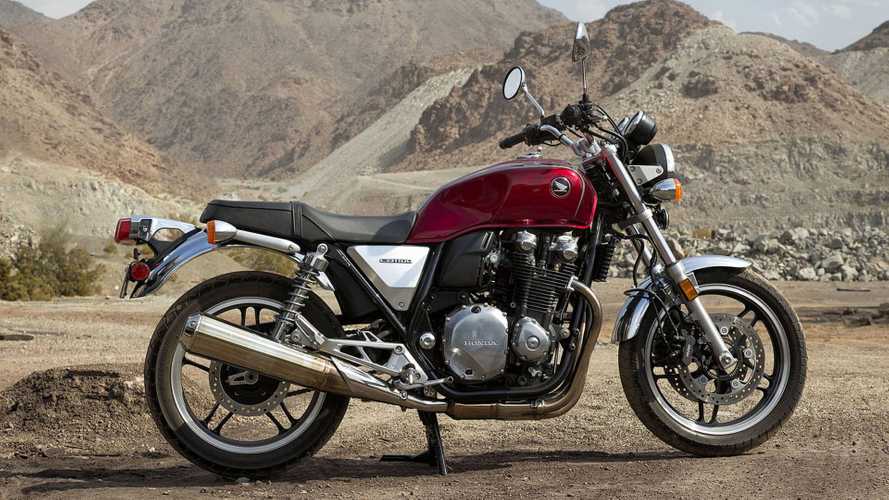 “Wow, that old Honda is clean!” The thing is, it’s not old. The 2013 Honda CB1100 ABS captures the character and looks of classic, air-cooled fours, but does so in a package that’s thoroughly modern and capable.

The CB1100’s been on-sale in Japan, Australia and New Zealand since 2009, but was just introduced to the American market this year.

Rather than shamelessly copy any particular model in Honda’s back catalog, this all-new bike instead draws influence from the entire history of the brand’s air-cooled inline-fours. Exhaust headers have a little ’75 CB400/4 in them, the chrome fenders and protruding taillight mimic the original ’69 CB750. Its muscular, squared-off tank is reminiscent of the ’99 CB750X.

That tank is narrow enough that you can see the 1,140cc engine poking out either side as you ride it. That engine is air-cooled (with the aid of a small oil cooler), with cooling fins that taper to 2mm in thickness at their ends. That measurement was precisely tailored to ensure the CB1100 would tink and ping while cooling down, making it sound authentic even as you walk away, post ride.

That’s just one of several ways Honda has built character back into what’s actually a thoroughly modern, fuel-injected motor. On cylinders one and two, the inlet valves in the four-valve head close slightly early to instill some roughness to the power delivery. Bore and stroke dispense with modern, oversquare practice for 73.5 x 67.2mm dimensions.

Neither power nor torque sound terribly impressive at 87bhp and 68lb-ft, but make up for it with huge flexibility. Peak power arrives at 7,500rpm and peak torque at 5,000, but the motor drives strongly from idle before tapering off as you approach the 8,500rpm limiter.

The riding position is also a classic, sit-up-and-beg with the slight forward lean that was characteristic of UJMs. The breadloaf seat is an inch higher for the US market. At 31.3 inches, it’s accessible for virtually any rider, but does result in some leg cramp for tall riders after and hour or two in the saddle. The big, round, chrome mirrors remain clear and vibration free at speed, clearly showing what’s behind and to the side of you. The green-faced clocks use analog dials for the tachometer and speedometer, but a small digital display between them displays the fuel gage, clock and odometer.

Suspension is by RWU, 41mm forks and dual shocks, both adjustable for preload only. They may sound basic, but provide positively plush damping, easily soaking up bumps for a smooth ride while eliminating any classic bucking and weaving in high speed corners.

And the CB1100 is a uniquely capable handler. That’s largely down to its large, 18-inch wheels and skinny, 110 (front) and 140 (rear) section, single radius tires. And don’t worry, those are tubeless, radials. No fussing with spoke tension or pinch flats on these Comstar-style wheels.

In those wheels, you can start to see the CB’s modern features. The brake discs mount directly to the spokes, eliminating the traditional carriers to benefit weight and simplicity and create a clean look. They’re gripped by four-piston Nissin calipers and, on the bike you see here, controlled by a modern Combined ABS system.

The CB1100 is also an extremely practical motorcycle. In addition to that fuel gauge and the comfy, in-control ergonomics, it’s equipped with a center stand, passenger grab rails and even a helmet lock.

I’ve lived with the CB1100 in Los Angeles for about a month, using it to scoot around town on errands and occasionally take the fun way home. It’s the kind of bike that’s totally practical and easy to ride through traffic, provides a pleasantly evocative feel while cruising at the speed limit down the Pacific Coast Highway in Malibu and that doesn’t mind lifting its skirt and doing sportsbike stuff on late night, empty roads. It does all that while giving off the appearance that you’re an upstanding, law abiding, stylish member of society

Modern brakes, handling and tires make it far safer and far more able than its classic counterparts. With them, you can carry more corner speed in more safety or simply respond to a situation in traffic with complete confidence and authority. Particular mention needs to be made of the brakes. While they don’t appear to be anything spectacular with their ruber lines and non-radial master cyclinder, they deliver precise feel and control and huge outright stopping power. You can trail them through a corner using one finger, sportsbike style, or be all hamfisted and just grab the lever to make a drama free emergency stop in an impressively short distance.

So, too, should the skinny, tall tires be called out. Know how most modern sportsbikes become all awkward while trying to take a simple, 90-degree city corner? Not so on the CB, it just drops right in, holds its line, then picks itself up on the way out. The single radius (most modern performance tires are dual radius) are a big help there, contributing predictability, but the skinny profile also speeds turning.

Then, last week, one of my friends asked if I wanted to run out the middle of the desert, two hours past Palm Springs, to do an article on a top secret project. The answer was obviously ‘yes’ and the only bike in my garage that day was the CB, so I just hopped on it and left.

Four hours later, it was over 120 degrees as we pulled into the abandoned iron mine, but the air-cooled CB had shown no signs of overheating and I was neither tired, nor sore.

Sure, the lack of a windscreen keeps comfortable cruising pace down to about 80mph, something also restricted by the CB’s five-speed gearbox. Lacking that extra gear or at least a very tall 5th, 85mph equates to 4,750rpm or so and the beginning of some unwelcome vibrations. Other than that, though, the CB puts in distance comfortably. It’s smooth, torquey, understressed inline-four makes for easy progress and, with the exception of some minor cramp in my 34-inch legs, it’s all-day comfy.

The passenger seat even had plenty of room for my overnight bag and there’s four prominent bungy points on the grab handles, plus rings on the pillion pegs; this is an easy bike to strap luggage to.

Across my time with the bike, I’ve averaged 42mpg. Combined with the 3.9 gallon tank that should have given me a 160-mile range, but the low fuel light would start blinking at less than 120 miles. Fill ups, even after running 10 miles with that light flashing didn’t exceed 2.8 gallons. That means the gauge is being overly conservative; bad news during my limited time on it, but owners should be better able to make use of the CB’s full range once they develop confidence with it.

Another relatively challenging task for the CB came on July 4th, when I threw a 6-foot tall girl on the back and rode from my place in Hollywood to a barbecue across town in Marina Del Ray. No tool kit is included with the CB, but I was able to rotate the preload collar using a simple channel lock wrench. With it maxed out and two-up, the CB was impressively stable even at speed on the highway and gave up very little in terms of outright performance, braking or handling. Even coming home through completely snarled traffic, the bike remained easy-to-ride and confidence inspiring. Impressive, given its 540lbs kerb weight, with a full tank.

Combined with the smooth, torquey motor, slick gearbox and strong brakes, this is actually one of the better passenger bikes I’ve ridden. Two-up, the CB is capable of maintaining a good pace through traffic without scaring the passenger or becoming unmanageable for the rider. That it looks the way non-riders expect a bike to look and has large, well-placed grab handles really helps too.

I’m now riding the CB everywhere with that preload raised. It seems to add a little ground clearance and help better plant the front tire.

Everything good that you remember about old Hondas with none of the bad.

Looks so good that casual onlookers assume it’s a classic.

Combined ABS creates commanding stopping power even in poor conditions without sacrificing feel or plunging the front when you use the rear brake.

The visual quality of all the components, paint and anything else you touch, see or feel is peerless.

Comfy ergonomics are just as good on the highway or at speed in a canyon as they are around town.

You’ll be amazed at how much character a fuel-injected, inline-four can have when it’s not built for outright performance.

Almost impossibly easy to ride and hides its relatively heavy weight extremely well. Maybe not quite first bike material, but if you’re considering getting back into riding after a long absence, this is a non-intimidating way to get back on.

One of the slickest shifting gearboxes out there.

Flexible motor pulls very strongly from idle; you can leave it in 5th gear all day long.

With just 87bhp powering 540lbs, performance is more classic than the engine size would suggest.

Heavy engine internals take time to decelerate when forcing downshifts. Better to relax and wait until revs are very low before shifting down.

Seat is a little low for riders of 6 feet and above.

No tool kit included, nor is there room for one.

Still, the CB1100 will easily out-handle that Triumph and includes optional ABS where no other retro standard does. It also has as much character as the Moto Guzzi, with much more performance.

Classic looks and classic performance combined with modern brakes, dependability and handling make the CB1100 the best kind of throwback: one that feels classic where it counts, but remains genuinely useable and safe in cutthroat modern traffic. A bike you can ride anywhere, anytime and enjoy in any situation.