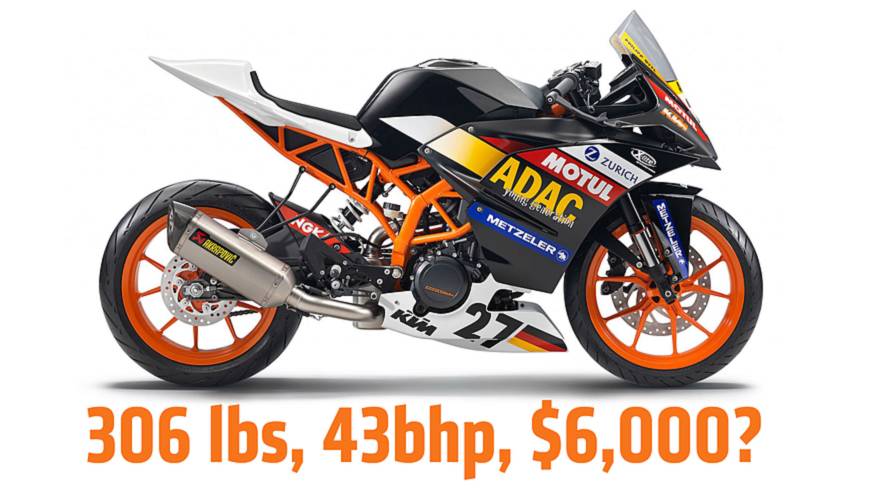 KTM RC390: a small, affordable sport bike"The new KTM RC390, which will be available for sale in 2014 will meet a big demand for affordable, quality...

"The new KTM RC390, which will be available for sale in 2014 will meet a big demand for affordable, quality sport bikes for the lower displacement class," says KTM CEO Stefan Pierer. The race bike you see here previews that new, street-legal sport bike.

Just to make things crystal clear: the bike you see in photos here is the KTM RC390 Cup. It's a race bike for a new spec series for junior racers. But, in unveiling this racing model in Germany this weekend, KTM is stating that a production model similar to it will be going on sale next year. That production bike will be called the KTM RC390.

KTM states that the new RC390 will be, "...the completion of the DUKE range of naked bikes with the 125, 200 and 390 displacement models, there will now also be a fully faired sports bike available for sale."

While this is the first time we've seen the bike, it's not the first time Pierer has talked about it. Back in April, he gave an interview to Cycle News in which he said, “We started out with the Duke naked bikes, but KTM is developing another family of motorcycles based on the same platform that will be full fairing sport motorcycles with clip-on handlebars. The RC125, 200 and 390 will be launched at the EICMA Milan show in November will look a little similar to our World Champion Moto3 Grand Prix racer, which gives a good marketing linkage to that.”

“These will essentially be the same platform as the Dukes," Pierer continued in that interview, "but with different styling — the look is completely different, and I think Gerald Kiska and his designers have done a great job.”

Now we get to see that design, at least as it stands sans headlights, license plate and all that fun road legality stuff.

Looking at the RC390 Cup next to the KTM 390 Duke it's based on, we see the same motor, brakes, swingarm, suspension and main chassis. The most noticeable differences are the trellis subframe and larger, side-mount exhaust canister. Well that and the edgy new plastic, obviously.

Getting excited? We are too. While there's now plenty of affordable, sporty motorcycles on the market, none are what you'd consider a true sportsbike. Something light and sharp that could adequately follow in the footsteps of the old Aprilia RS250 or FZR400R. While signs are that the RC390 will be affordable, it should also be more of an outright, focussed sport bike and less of a budget all-rounder like Honda's CBR250R and CBR500R.

Where the 390 Duke weighs 306lbs (wet) and makes 43bhp, this RC390 Cup shears that weight to just 286lbs, but also cuts power to 38bhp. The reason for that power change is unclear, but is likely some sort of racing class regulation. We'd expect the production bike to maintain the Duke's power and be around the same weight.

American availability and price? Both are fingers crossed for now. While the 390 Duke will be entering the American market in 2014, no price has yet been announced. In Europe, it retails for around 5,000 Euro depending on the market. That's slightly cheaper than the Kawasaki Ninja 300.