On Riding In Rome 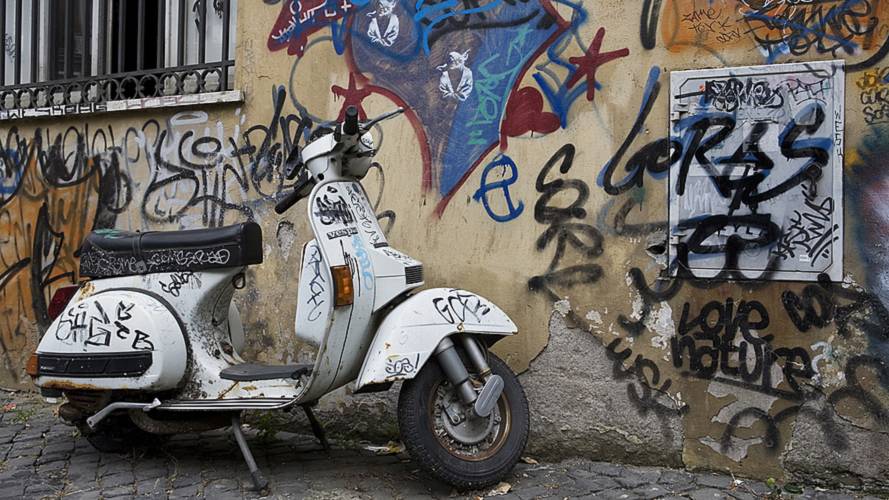 On Riding In RomeA few years ago I packed up my worldly possessions, put them all in a shipping container and left America. I was heading to Rome,...

A few years ago I packed up my worldly possessions, put them all in a shipping container and left America. I was heading to Rome, Italy, to work for 18 months, but I couldn’t bear the thought of being without a motorcycle for all that time. So, I completed a three-inch pile of customs papers that took forever to fill out, presented someone with an exorbitant amount of money and exported my bike on a temporary basis to one of the craziest and most wonderful cities in the world.

The logical person would have got to Italy and gone to the nearest motorcycle dealer and bought a new or even a secondhand bike. But to have done that I would have had to sell mine here in the U.S. (which I was loathe to do) as I knew I would be returning to the U.S. I would then have to buy and sell a bike in Italy. Despite the huge shipping costs, all in all I think I broke even versus the cost of depreciation of buying and selling two bikes on two separate continents. Are you still with me?

What I was not prepared for was the unforgettable experience of getting on a motorcycle in Rome.

Riding a bike in Italy is literally a physical assault on all of your senses. When you first head out, absolutely nothing can prepare you. It feels like you’re taking part in the world’s biggest and most disorganized motor race. If you think traffic is bad here in U.S. cities, try downtown Rome in early morning rush hour. In the rain. It is a cacophony of horns, cars, scooters, buses and trucks with every single driver or rider trying to get somewhere faster than the next guy. They take no prisoners. It’s every man, or woman, for themselves and for the first few weeks I found it to be utter bewildering chaos.

If you stop, slow or behave in courteous fashion you’re dead meat. They’ll carve you up, take your braking space and leave you for dust. I have never in my life ridden anywhere where so fast and so aggressively, simply to keep up with urban traffic.

Road signs, for the most part, are ignored and traffic signals in Rome are considered a hindrance. In general, red stop lights are regarded by Romans merely as a suggestion. It’s up to you if you choose to stop or not. But if you do then the guy behind you gets annoyed and will be on his horn, waving his arms and calling you every name he can think of.

Put off by the bits of broken motorcycle and scooters that litter some of the more notorious intersections, I stopped every time.

But I was often astonished to watch mere kids on their scooters (their crash helmets perched on the back of their heads as a token acknowledgment of the road laws) rather than wait at a red light and taking to the sidewalk riding between pedestrians and disappearing in a cloud of two-stroke exhaust smoke to rejoin the road a little further on. The odd thing was nobody seemed to think it was unusual. People simply shrugged and carried on.

I tried getting up early at the weekends to ride in downtown Rome and, while the traffic was lighter, I would then be faced with random people standing in the middle of the road talking and smoking cigarettes, or stray dogs running about. Once there was a herd of goats in my way and on one particularly memorable morning a group of prostitutes waiting in line curbside for early Sunday morning customers.

The road surfaces in Rome are truly horrible. In places, the tarmac has melted away and there are huge potholes mixed in with centuries-old cobblestones that are wickedly slippery at the slightest hint of rain. Riding a motorcycle there is similar to riding a military assault course. Everywhere you look there are obstacles and dangers.

Very early one Sunday morning, right outside the Coliseum, where a millennium ago gladiators, Christians and wild beasts once fought each other to the death, I was pulled over by a bored looking Carabinieri motorcycle officer. I was riding too fast on a restricted perimeter road and I knew I should not have been there. But there had been nobody about and, for once in Rome, this was a smooth tarmac road that got enticingly close to the rear of the Coliseum.

The Carabinieri is Italy’s military police and can do basically whatever they like whenever they like. The officer who waved me down wore mirrored aviator sunglasses, had a couple of day’s stubble on his chin and stood in the middle of the road with his arm outstretched holding his palm towards me indicating he wanted me to stop. And he wanted me to stop immediately. His other hand was resting nonchalantly on the pistol in his belt.

I slowed and pulled over behind his police issue Moto Guzzi and started to take my crash helmet off. I had an idea as to why I had been pulled over and felt it might involve excessive speed and riding where I shouldn’t have been. He strolled over and started talking to me. I played the innocent and although I can speak Italian I thought I’d play the tourist card. He saw my feigned look of confusion and in broken English told me:

He beckoned with his fingers to show he meant business. I knew I was in the wrong. I also knew I had not brought my documents or my wallet with me and that could result in an even bigger fine. I’d heard of stories of people with no cash on them being personally escorted to a bank by the Carabinieri so the required money could be extracted from a cash machine to pay a fine.

Failing that they impound your bike and have it towed and you go off to spend a few hours in a cell while the Carabinieri forgot about you and decided what to have for lunch or dinner that day.

This I had a feeling this could be a tricky situation for me. The Carabinieri officer wandered to the back of my bike and looked at the number plate. As I had shipped it for a temporary period of time I was allowed, under the export rules, to run its California plate. I saw his eyebrows shoot up and his lips begin to purse. He stopped writing on the yellow form he had been filling out.

“Americano?” he asked. “You ride from America all the way here?”

“No Inglese (English), but the bike is registered in the U.S. and it’s a temporary import and goes back in six months,” I said.

This was too much for the Carabinieri to take in. Too much paper work and just all too difficult. He crumpled the form up and walked back to me and bringing his face level with mine he said:

So with that I was allowed to leave and be on my way. I had not had to produce my license, documents or pay what could have been a potential 500 euro fine ($660) or possibly more. Even though I had been in the wrong I guess I just got lucky that day.

And as the Carabineri officer had pointed out to me people is crazy sometimes. Particularly in Rome.