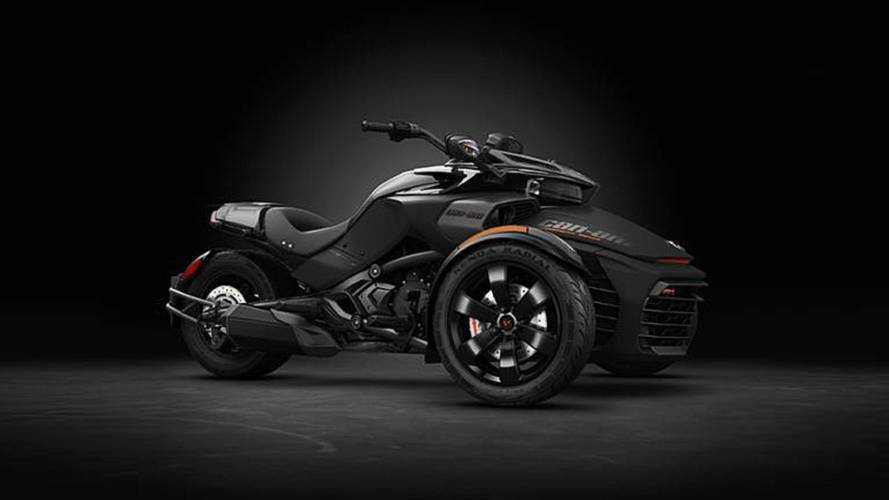 Can-Am Spyder F3-S Special Series in Triple Black to be Unveiled at SturgisBack in 2007 when BRP introduced the Can-Am Spyder three-wheeler,...

Back in 2007 when BRP introduced the Can-Am Spyder three-wheeler, motorcyclists (and everyone else) wondered what the heck it was. The three-wheeler configuration was reversed with a single-driven wheel in the back and two front wheels, an ATV chassis, and quite possibly one of the strangest looking vehicles to hit the streets. But it caught on and with successive improvements over the years, it has become a popular option for those who want the thrill of motorcycle cruising with a different dimension and a lower curve for riding skills.

What it has effectively done is create its very own niche cruiser segment—providing power, speed, comfort and handling. Now, BRP is set to unveil their newest iteration at the Sturgis Motorcycle Rally: The Can-Am Spyder F3-S Special Series in Triple Black, and it’s potently sinister.

It builds on the excellence of the Can-Am Spyder F3 launched earlier this year and that excellence takes the form of improvements over previous Spyder RT and ST models—including a more aggressive look thanks to the more exposed Rotax Triple engine and dramatic angularity, the Vehicle Stability System, a spectacular customizable UFit seating position, better handling and control as a result of the feet forward positioning and a rider-easing, the available push button SE6 semi-automatic transmission and a bigger 7.1 gallon fuel tank.

The F3-S Special Series in Triple Black adds a dark and stealthy black hue in matte and gloss with special graphics setting it apart from the stock F3 model, a tinted low profile windscreen, and some seriously mean 6-spoke black chrome front wheels that cap off the look beautifully.

BRP throws the slick SE6 semi-automatic transmission into the mix, along with the already potent Rotax 1330 ACE In-Line 3-Cylinder engine with 115 hp @7,250 rpm and 96 lb-ft of torque @ 5000 rpm. Traction control and ABS keeps all the power in check, too.

No doubt there will be a contingent of Can-Am Spyder riders at Sturgis, and that group is ever growing—soon to be bolstered by proud owners of the F3-S Special Series in Triple Black that will be in the elite segment thanks to its as yet unannounced limited production numbers. No pricing has been provided yet, but that will come soon after the Sturgis reveal. It goes on sale in September of 2015.