Learning To Lean With SoCal Supermoto 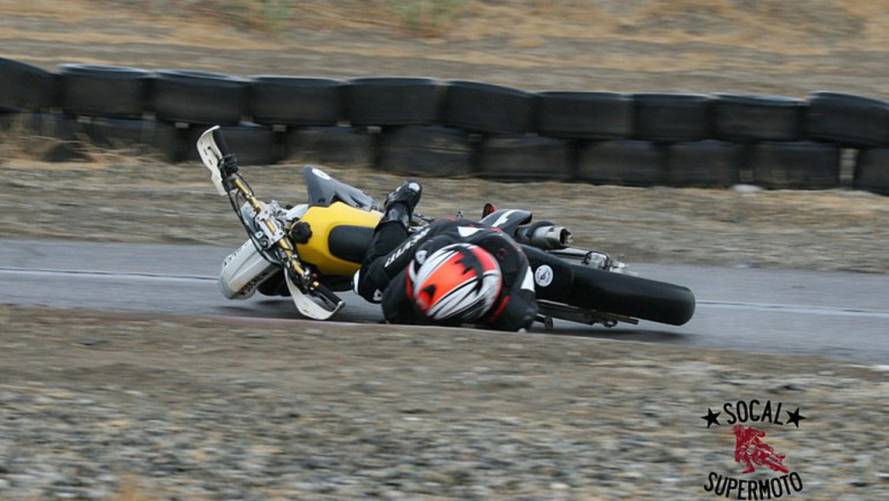 Learning To Lean With SoCal SupermotoFormal training on a race track is the absolute best way to learn advanced riding skills. But, those schools...

Formal training on a race track is the absolute best way to learn advanced riding skills. But, those schools tend to be very expensive. Not SoCal Supermoto, for just $199 you get expert instruction, a loaner bike and a full day on-track. Just as good?

Above: Our friend Darragh McDermott of Hollywood, California, crashing for the second time in a single day. Neither he nor the bike experienced any damage.

Why learn on a track when you ride on the road? Well, safety for one. On a track, there's nothing to hit, nothing that will kill you and nobody that's going to write you a ticket. That leaves you free to concentrate on going fast and learning how to go faster.

Why take a school as opposed to just attending a track day? Well, it turns out this whole riding a motorcycle thing is difficult. I've been riding for a little over two years but, in the absence of advanced training, I'm not what anyone would describe as fast or proficient.

On a track you can ride your motorcycle to the limit without fear of road conditions, police or speed limits. It's even a better place to learn how to ride your motorcycle properly — by being taught by someone who was a professional racer and a former instructor at the ($1,850+) California Superbike School really helps cement the correct riding skills into you.

Before starting SoCal Supermoto, Brian Murray was an MSF instructor. Teaching new riders how not to fall over in parking lots, he gave over 2,000 individual lessons before moving on to something more advanced. The goal was to find a way to help riders advance their skill in a safe, consequence free, accessible environment. Supermotos are the perfect tool for doing so, replicating sport bike dynamics at lower speeds and standing up to crashes much better. On one, you still lean way over and trail brake and all that good stuff, you just do so at around 40mph instead of 100mph+. The ability of the bikes to survive crashes, plus their low service and tire costs are a big part of the reason the school can be so cheap.

The school is taught at Adams Motorsport Park in Riverside, CA and that $199 price nets you training, track time and bike rental (Suzuki DR-Z400SMs), as well as action photos. Darragh is particularly happy there was a photographer on hand to capture his crashes. You need to provide your own helmet, leathers, boots and gloves.

Before showing up, I really had no idea how to probably ride my motorcycle through a corner, nothing about braking, entering a corner or even getting out of one, shifting and riding on the straights.

Stu Smith was our instructor for the day. He started like most of us, knowing very little and began taking classes, going to track days and eventually teaching. He says, "it's so awesome to see people become way better in one day than they were before and even it's better to see one of your students winning professional races."

Proper Lines: "Most riders, when they start out riding, have a tendency to turn into a corner too early. That tends to make you run wide. When we get into lines and line selection, the thing we start with is where we should turn in, deeper and further into a corner, so they you a better apex and a better corner exit. A visual reference is helpful for this such as an 'X' on the track or a certain marker like a cone. The best idea for a good line is to straighten out a corner the best you can, have only one steering input, and roll on the throttle all the way through."

Corner Entry: "People tend to corner too early for a couple reasons. Number one, it's a natural thing to turn in early so you don't go off the road, its a safety thing. Number two, the bike goes where you look. When you turn to look at the corner your bike starts to follow where you look, so try to look a bit later."

Braking: "The best place to start with braking is to get most of your braking straight up and down. That means you release the brake and turn/lean simultaneously. Braking causes the front to compress and leaning causes the opposite, so if you do it simultaneously the bike begins to level out and remain balanced, allowing you to corner better."

Positive Throttle: "The basic rule about positive throttle is that, once you get the bike turned, you get back on the gas again for the remainder of the corner. That makes the bike stand up and increases stability which allows for greater speed and faster corner exits."

Apex: "I ask every class to define an 'apex' and I always get different answers. My thing about apexes is you choose when you are going to apex the corner, it's the spot where you get closest to the inside edge of the corner. You want to apex later, to come off the corner early and you have better drive out of the corners to go faster."

Body Position: "Body position is interesting on the supermotos — it is very different from on a sport bike. On a supermoto, you have to sit far forward on the seat to keep the weight on the front tire — if you sit way back you'll begin to lose the front. Body positioning for a sport bike, biggest main point, it's really important to not twist your hips, the outside leg should keep you on the bike — which allows for better cornering and more lean."

How do these skills transfer to the street? "I try to relate to both to the track where we are at and street riding as well, turn-in points (on the track its easy with those Xs) you need to go into deeper on turns and when you approach your corner on the street you now know you need to go in a bit deeper, so you don't run wide or go over the yellow. It all relates directly to the street, you just have to tone it down a little so it's safe. Roll the throttle on the street for the stability it creates, it's safer, it's more balanced and, if you go across some gravel, it'll be easier on the rider."

This is my first track day, how do I increase my overall confidence? "Confidence comes with experience, just doing it. Also kinda doing it gradually, not like trying to set the world on fire on your first track day. You go out and don't get in over your head — don't think you're going to set track records and get recruited into MotoGP. You want to go gradually and press your limits not blow past them. In the end, get some training, a lot of guys do track days and realize they're not as good as they thought. All the go fast parts won't do you any good if you can't ride — the more variety of riding you get, the better your bike handling skills become."