Great Multi-tools for On and Off-Road Repairs 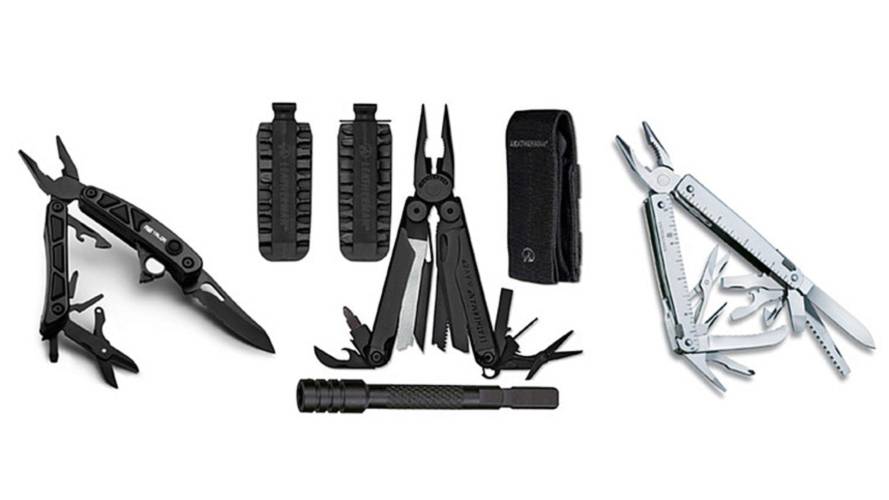 Great Multi-tools for On and Off-Road RepairsNot everyone brings tools with them on a ride since anything approaching a full kit is just too heavy...

Not everyone brings tools with them on a ride since anything approaching a full kit is just too heavy and impractical. Even a few essential tools can be cumbersome, especially if you’re not really packing any side or top mounted bags. But sometimes you’re out for just a short daily ride and something goes wrong that requires more than just the strength of your fingers and some determination. That’s why packing a multi-tool is smart. It might not be able to handle every repair, but it’s far better than being stranded on the side of the road waiting for a flatbed tow. Here are some great multi-tools to toss in your pack or strap to your belt that will provide a modicum of assurance that not all is lost.

It looks unconventional, but what’s concealed within is truly versatile. The needle-nose pliers are ready with a single switch to deploy them. It has a rather large and very sharp plain edge blade that opens with an easy-to-use flipper, but the best feature is the hex bit opening at the opposite end of the pliers. Phillips and flathead screwdriver bits come with it and fit into the handle, but the Zilla will accept any standard sized bit, making on-road repairs that much easier.

MUST READ:  Be Prepared: Some Essentials for the Road | RideApart

This is the toughest tool we’ve seen to date. It can take a beating and still work beautifully. Okay, so it’s not the lightest, but it has 24 folding tools including pliers, a 230mm/nine-inch ruler, 2, 3, and 5mm screwdrivers, a wire stripper, crimper, cutter, and an all important bottle opener (for when your ride is over, genius.) The feature you’ll probably never use? The SwissTool RS’s lifetime warranty.

It may not boast one of the big multi-tool names, but the Power Tek Fire Talon are the big guns, with grippy inserts for the tougher moto jobs. The Fire Talon uses heavy-duty black oxide stainless steel, so it looks as good as it works. In addition to spring-loaded needle-nose pliers, wire cutters, a stripper, and a combo edge knife blade, the Fire Talon comes with two LED flashlights—one at each end to aid in nighttime visibility.

This is the go to bad boy in the group with more tools than you can shake a torque wrench at. Made with the kind of bombproof construction Leatherman is known for, it comes with not one, but two sets of pliers, scissors, two knife blades, screwdrivers, two files, wire cutters, saw and the best part: two 21 piece tool steel bit kits that operate with the included bit driver. The kits provide Phillips, Torx, Pozi, Slot, Hex, and Square-Drive bits and make quick work of nearly any task you might need done on your bike. It also comes with a Bit Driver Extender, making awkwardly positioned jobs easier.

MUST READ:  The 5 Most Versatile Multi-Tools For Motorcyclists | RideApart

No, it doesn’t run on diesel fuel, but it does go the distance with incredibly solid construction, great beadblasted finish, and twelve tools including scissors, a saw blade, retractable pliers, cross-point screwdriver, small, medium, and large flat-blade screwdrivers, a can opener, a bottle opener, and a wire cutter/stripper. The needle-nose pliers are thin and fit just about anywhere bigger pliers can’t. They also store flat and small in the high-quality nylon sheath that goes just about anywhere you do.

This just might the coolest one out of the group with it’s fast push-button pliers that fly out at a moment’s notice. They also retract to a compact size, making the Switchplier easy to stow. The SwitchPlier 2.0 is easy to use with one-handed access to the spring-loaded pliers. But it’s not all plier and nothing else. The Switchplier also comes with wire cutters, partially serrated blade, three-sided file, Phillips screwdriver, awl, can opener, small flat screwdriver, bottle opener, medium flat screwdriver, ruler and convenient pocket clip.