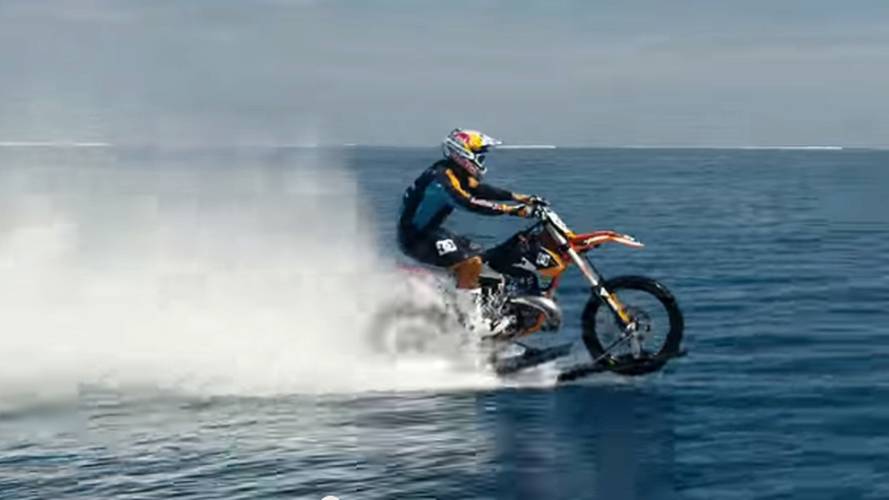 As a surfer who writes for RideApart, I feel uniquely qualified to report on the video you're about to watch, that of Robbie Maddison riding a very heavily modified motorcycle into the waves at Teahupo'o. I could tell you all of the reasons why this is a terribly stupid thing to do - the legendary Tahitian break is one of the most difficult and dangerous waves on the planet, breaking as it does over an extremely shallow reef that can very easily shatter the bones of even the most experienced big-wave rider. But I'd rather show you.

Ouch. What makes Teahupo'o such a monster is not that it's a particularly tall wave; famous big wave breaks like Mavericks and Waimea produces waves that are bigger than Teahupo'o. The challenge for surfers at Teahupo'o is that so much water is displaced in such a quick, powerful and nightmarish fashion. It's the reef below that does it - the semi-circular reef structure rises up to a mere 20 inches below the water's surface at points. The end result during a big swell is that the wave can actually be as thick as it is tall, giving the impression - as seen in the video above - that the ocean is swallowing whoever happens to be in its way. Since 2000, 5 surfers have died at Teahupo'o, and it doesn't take much for the break to kill someone; one surfer died after being slammed into the reef by a wave that was "only" 12 feet tall. It's not a wave to be taken lightly.

But if any motorcyclist is qualified to ride a motorcycle into the Teahupo'o lineup, it's Robbie Maddison. Along with being a noted stunt rider (he's backflipped the Tower Bridge in London, and has done Daniel Craig's motorcycle stunts in recent Bond films), he's a longtime surfer, and has ridden big waves (on a surfboard) at Teahupo'o. And so when he combines the two sports, the result is a thing of beauty. Crazy, crazy beauty.

And while this might seem like a wacky stunt, think of how practical Maddo's surf bike is! Put those skis on, say, a BMW F800GS, and your Adventure Touring will take on an entirely new dimension. Instead of riding around Lake Michigan, you could just ride across it.

Needless to say, we're glad Robbie made it through his Teahupo'o experience in one piece, and we're hoping that he does more with his surf-bike. It's conceivable, with a support boat along for the ride, that Maddison could ride that bike across the Pacific, and possibly farther. What do you say, Maddo? Want to be the Magellan of motorcyclists?