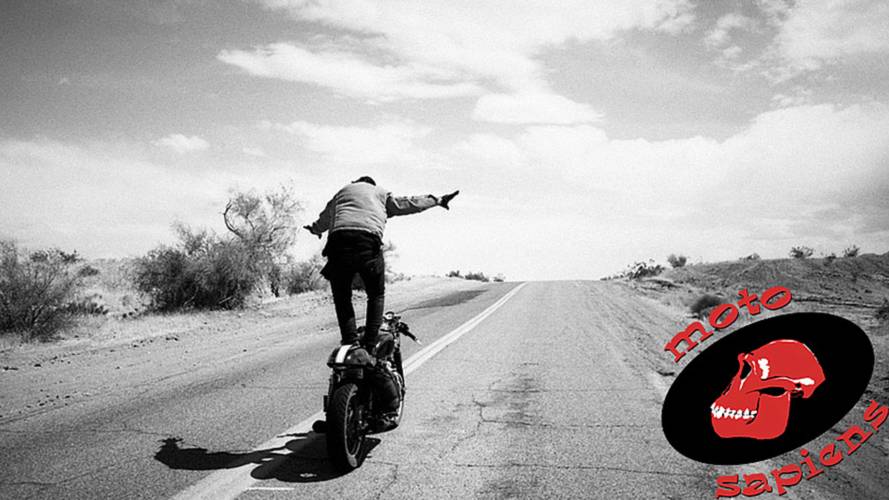 Johnny Strabler, Burt Munro, Bud Ekins, T. E. Lawrence, and Danny Lyon. These are the names that have formed American biker culture as we know it. But why was Lyon, a photographer, so influential and who's carrying his torch today?

Motorcycles and their riders make perfect subjects for photography. They all have interesting shapes, movements, colors, and attitudes. They are often in interesting settings, and they encompass tremendous beauty and ugliness, with compelling stories begging to be captured and shared. Any halfway decent amateur can go on a roadtrip or head to a rally or biker bar, and get some really good shots.

While there are plenty of us hobbyists out there, there are a few pros who are making serious art out of biker photography. It’s like there’s this maturation of biker aesthetic culture happening, where art, fashion, food, music, and bikes are converging in hip events in little pockets around the country and in Europe. I’m not going to get into what this evolution might mean right now – it’s a whole topic by itself – but let’s consider some kick-ass biker photography.

Scott Pommier is a professional commercial as well as fine art photographer, and a rider. He is probably the best-known bike photographer today. His clear, direct images have a candid, spontaneous feel that is definitely no accident. There are a lot of point-of-view riding shots, scenes of the ecstasy of riding as well as simple daily maintenance, giving you a feel of “real life,” emphasizing both the characters and machines.

Ray Gordon shoots motorcycle and hot rod culture with verve, energy, and wit. Whether it’s drag racing, hooning behind a warehouse, or just riding a panhead and eating a chicken leg, his images pop with color and movement.

Scott Toepfer captures his experiences in photo, book, and film. His portraits are typically framed closer than the others and feel more intimate. They’re a little grainier and mostly black and white, which strips down some of the energy and, I think, adds to that intimacy.

Lanakila MacNaughton focuses mainly on the riders. Her portraits of women riders are bold, strong, cool, and undeniably sexy. (If your image of a sexy woman and a motorcycle is something from the pages of EasyRiders, this will completely change that.) Like most of these photographers, she knows the people she is photographing, and the personalities come through, even when some of the images border on the abstract or surreal. One shot of a floating biker torso in the sky reminds me of Magritte. She recently created the Women’s Motorcycle Exhibition, which was at See See Motorcycles (one of those art-cycle-fashion nexuses), and will be at the Riverside Art Museum in Riverside, CA, in December.

I love that all this is happening right now, and that these and other artists are creating such high quality work that reflects real people and real rides. Still, for my ducats, nobody can touch Danny Lyon.

There are certain names in biker culture that you simply have to know about. These include Johnny Strabler, Burt Munro, Bud Ekins, T. E. Lawrence, and Danny Lyon. Mr. Lyon is a photographer with a major body of work documenting American culture over the last half-century, but he is best know (certainly among our people at least) for The Bikeriders, a collection of powerful black and white photos he took of the Chicago Outlaws motorcycle gang in the 1960s. Lyon rode with the Outlaws from 1963 to 1967. This is right when Hunter S. Thompson was with the Hells Angels, and it is interesting to contrast these photos with his book. Lyon was inspired by Walker Evans, whose starkly realistic images of the Great Depression have helped define our conception of that era ever since. Two recent exhibits of Lyon’s work, at the Akron Art Museum and the Hofstra University Museum, have given him some well-deserved new attention.

I can’t go into the whole cultural significance and impact of his work here, but if you buy me a beer, I’ll be happy to go on and on about it. What I want to do here is just look at a few of his pictures and try to convey what makes them so amazing.

The first image is one of his most famous, crossing the Ohio River at Cincinnati. The visual motion here is from right to left, which already creates some tension, since we’re used to images moving left to right. Then the rider is looking over his shoulder, which creates a countermotion and more tension. It’s this backward glance that really makes this shot. We don’t know what he’s looking at; there is some uncertainly in it, and it is a little unsettling. There is so much speed in one direction, but there is something pulling him (and us) back. If it were just a picture of riding on a bridge, that would be fine, but this gesture lets us stop and consider this guy and wonder about his story.

I also like how the bike and rider are in high-contrast black and white – with the whitewalls and white tank, black bike frame, and the white Outlaws logo on the black shirt – while the background is in shades of gray. This lone rider really jumps out of the composition just by the levels of contrast. On top of the character of the content, there is a rich, beautiful visual composition here.

Next, the dejected-looking biker at the pool table really draws you in. The emotion in this is very strong and very real. It lets the viewer in a little bit, but not too much. You are compelled to wonder what is going on. It could be as simple as having lost a bunch of money on the pool game. Maybe his girl just walked out. Maybe it’s heroin. Maybe it’s the family he left behind. Who knows, but the guys in the background don’t seem too interested, and this guy evokes a lot of sympathy, even though, whatever is troubling him, it’s likely to have been his own doing. These are morally complex photos.

The photo of the bikers in the field is not at all how most people would’ve taken that picture. Three-quarters of the image is dandelions. It’s quite a contrasting foreground to the denim, leather, and steel. The soft gray field makes the dark people seem even darker. To me, though, this image suggests a different metaphor. He has framed it so the bikers are sort of coming up out of the field itself, like they are part of nature. Maybe they’re natural, and it’s our conventions and rules that are artificial. Maybe we (squares) are the unnatural ones. The depth in this composition draws you in, it makes you want to go forward into the image. It almost feels like you want to be able to be there, too. I don’t know if Lyon was trying to say any of that with this shot, but great images like this let you see into it and create meanings out of it.

Finally, there is this incredible image of a young woman leaning against a jukebox and holding a beer bottle. She is at once innocent and not innocent at all. She is relaxed but tense, seasoned but young, beautiful but hard, cool but sad. Her pose is candid but looks very classical. You could imagine that arm on a Greek statue. She is lit by the jukebox in this very dramatic, unnatural way that underscores a feeling that maybe she’s in over her depth. Maybe she left home too soon, and for all her apparent toughness, she’s not in a good or safe place in her life. What can the future really hold for her? Is this the life she wants? Is she stuck? Again, we can’t know any of this, but a picture like this forces you to consider the humanity behind it.

It would’ve been all too easy to make caricatures out of his subjects. Instead, Lyon brought them to life with sympathy but not sentimentality or sensation. At the time, bikers were mostly simply considered a bunch of brutes, epitomizing mayhem and chaos. He was able to humanize and translate that subculture to a wider public without whitewashing it, and make stunningly beautiful art at the same time.