The Best and Worst Tips Given By Long-Term Motorcyclists 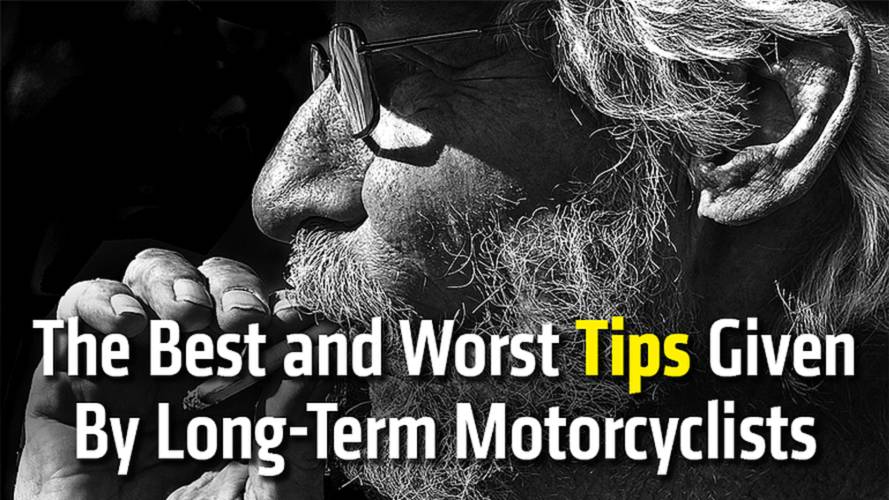 Spend enough years riding and you’re going to accrue some wisdom. This is the best and worst advice given by long-term motorcyclists.

Spend enough years riding and you’re going to accrue some wisdom. Visit any biker gathering and you and I are going to hear it, too. Is there anything old timers like to do more than dispense advice? These are the best and worst tips given by long-term motorcyclists.

This is the most-used “reason” for why older, experienced riders who should know better insist on not wearing a helmet. The thing is, it’s utterly untrue. Humans are only capable of using 90 degrees of their vision to either the left or the right, while the minimum legal standard for helmet vision sits at 105 degrees in both directions — 15 degrees more than we can see anyways. If a helmet restricts your vision up or down, it simply doesn’t fit correctly.

Wear a helmet in a quiet room and yeah, it’ll reduce your hearing. But, out on the road, the wind and engine noise make it so you’ll actually hear less at speed without a helmet than with one. Earplugs take this a step further; with them, the ambient noise (wind) is dampened, leaving you more able to hear important stuff like sirens, horns and screeching tires.

Worst Advice: You Don’t Need Gear If You Know How To Ride/Crash

Accidents can happen to anyone. How is skill going to help you if a tire blows out or — the most common motorcycle accident — a car pulls out in front of you too late to avoid. In that case, no super human feat of braking or turning is going to save you, you’re going to go down.

And no, “knowing” how to fall is not a real thing. The forces involved in a motorcycle accident are extreme, way beyond those the human body evolved (which is a real thing) to handle. Our ancestors didn’t have to deal with hitting a stationary object at 85 mph, then tumbling through the air to land in the middle of a busy highway full of other 85 mph objects. But, safety gear did, that’s what it’s designed for. Wear it or face rapid natural selection.

Worst Advice: A 600 Is a Beginner’s Bike

“I’m just too big, talented, (insert other excuse here) to ride a little 600.” It’s always funny when people tell you that because they’re invariably the people that don’t have enough talent to handle one, much less the literbike/super sweet ‘Busa they’re toodling about on. In reality, a 125 bhp bike weighing around 415 lbs (full of fuel) is more performance than about 95 percent of motorcyclists are able to use, full stop. And yes, they’re torquey and flexible too. If you’re unable to make a 600 go fast, you need riding lessons, not a bigger, more difficult bike to ride.

No it doesn’t. Not unless you are really curious what your insides look like.

Best Advice: It’s Not What You Ride, It’s How You Ride It

It’s Not What You Ride, It’s How You Ride It

It’s not the size of the boat, it’s the motion of the ocean. Or what have you. With the vast majority of bikes existing so far outside the ability of the vast majority of motorcyclists — plus real world things like cops and speed limits and minivans — the outright speed a motorcycle is capable of travelling is entirely dependent upon its rider, not its engine size. We’ve seen Ninja 250s pass liter bikes on the track.

Get Back On The Horse

The longer you wait to start riding again after a crash, the more your confidence is going to decay. This really works. The act of manning up and climbing back on subconsciously demonstrates resolve and metal to yourself and doesn’t allow self-doubt and pity to build.

Well, there totally are, but this saying has a point: it’s a reasonable approach to reducing risk and the long-term goal of riding your whole life that will keep you on two wheels. Having the urge to drag knee today, at all costs, tends to have an adverse effect on the longevity of your riding career.

Best Advice: Start On A Bicycle

Start On A Bicycle

This one might sound odd, but the humble bicycle has lots to teach you about riding, just in a safer, more accessible, no-license-necessary form. Stuff like: separate brakes, countersteering, balance and interacting with traffic while on two wheels; all skills vital to the art of motorcycling.

It’s not likely an old biker that will tell you this one, but everyone else will. And it’s true. That’s also why they’re so life affirming and rewarding. And why you need to apply the right attitude and approach to riding one. If you someday aspire to being one of the old guys dispensing advise, you’re going to have to spend the rest of your life actively trying to become a better rider. Try and do that each and every day and you might just live long enough to tell about it.

What’s the best and worst advice you’ve been given about riding?