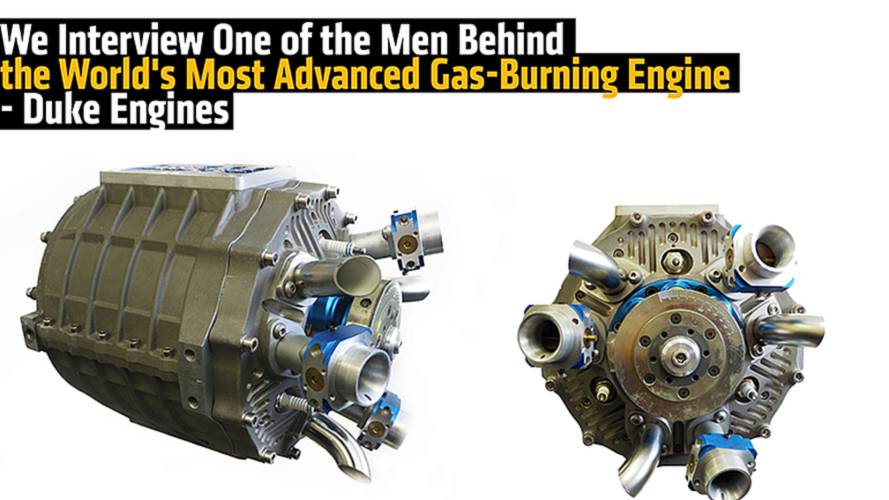 We Interview Chief Technology Officer Dr. Mike Fry at Duke Engines about the possibilities of the Axial engine.

Yesterday we posted a story on the Duke Engines 5-cylinder Axial engine, a 1,000cc beast tiny in size, which features little to no vibration, no valves, fewer moving parts and makes 125 hp. We hope to see it in a motorcycle soon, but in the mean time we spoke with the Chief Technology Officer at Duke Engines, Dr. Mike Fry, to find out how practical the engine really is, what its limitations are, and the future of Duke Engines.

READ THE ORIGINAL STORY HERE: The Most Advanced Gas-Burning Engine Ever in a Motorcycle Concept - The Duke Axial Engine

What can you see in the future for axial motors with regards to building a Duke powered prototype motorcycle?

We would like to do it; it is a suitable application and would make good use of Duke DNA – high power density small size and weight. It is hard to justify a development program on the volumes of 1 motorcycle application; it would most likely be achieved as a spin-off from a light aircraft, marine or some other program.

Your design is drastically different- allowing this gyroscopic effect to be reduced or maybe disappear?

That is correct – the counter rotating cylinder group and crankshaft tend to cancel out gyroscopic reactions. It is possible to completely cancel these reactions, but in practice it may not be needed to go that far, preferring to optimize solution for a balance of weight, gyro effects, size, performance etc. The counter rotating parts also accelerate/decelerate in opposing directions during a firing torque-pulse, reducing the associated torque reaction of the engine on its mounts.

Can your design allow this to change drastically?

The Duke design offers a radically different package shape to conventional engines – a compact cylinder with the output shaft on the central axis, more akin to the shape of an electric motor. This offers a new set of possibilities for design and integration of the engine into a motorcycle chassis – or car/generator or aircraft, for that matter.

Can a 1000cc axial motor be built without expensive exotic materials, ie. Titanium?

Yes – we currently use titanium connecting rods in our prototype engines, but the use of exotic materials is optional, depending upon the cost/performance trade off sought – just as with a conventional engine.

Can your design allow for an exchangeable gearbox for ratio change?

Yes – a conventional gearbox and drive system would be used with a Duke engine.

In regards to power delivery and traction, cross plane crankshafts are known to give the rider more feeling from the rear tire. Promoting confidence and grip while accelerating is a big factor when dealing with 160+ HP. To avoid a high-side crash this type of mechanical feature helps the rider from getting his rear wheel spinning faster than his motor (by feeling the tire and his available traction). The 5 cylinder Duke engine fires 3 times/rev of the output shaft – the same as a 6 cylinder conventional engine. The power delivery would be expected to be equally smooth and would allow for better feel/less tendency to break tire traction than the “lumpy” impulsive torque delivery associated with 4 cylinders or less. The 3 fire events/rev also increases torque by 20% compared to conventional engines with the same displacement – Duke 3.0 naturally aspirated prototypes have produced 113 Nm/l, for example.

READ MORE: How To Break In a New Motorcycle Engine

What RPM have you reached with little or no vibration?

We have run our 3.0L prototypes up to 4500 rpm crankshaft speed, full load (215 hp and 340Nm), with a full design speed of 6000 rpm; the pistons are moving 20% faster than conventional engines, due to the counter rotating cylinders/crankshaft. Smaller displacement motorcycle engines would be expected to rev much higher. We have not completed vibration testing, but the complete primary balance and negligible secondary vibration offers fundamentally better prospects than 2, 3 or 4 cylinder inline engines. See the “coin trick” of a $2 coin standing on edge while the engine is started, revved, and stopped.

What do you think the minimum weight would be for the 1000cc motor in a motorcycle? Taking into account 1 motor using conventional materials and 1 using titanium, magnesium etc.

The numbers sent in the 1000cc concept are best estimate for a road bike derivative using conventional materials. Up to a further 30% might be saved with aggressive use of Titanium for internal components/exhaust and carbon fiber for external housings and intake system – in an “all-out” race application. The external casing is lightly loaded (internal rotating structure carries the majority of gas and reciprocating inertial loads) so it can be made very light – think “outer shell” not “cylinder block”.

Can the Axial motor be built to have a final drive shaft that allows for chain/drive sprocket on either side of the motor, like in a transverse mounted engine?

The output drive shaft can be taken from either end. We conventionally take drive out through the opposite end to the manifolding to allow maximum package space for the intake ports/pipes etc.

What is the firing order currently on your newest prototype engine?

A curiosity of the Duke engine is that the 5 cylinders share the 3 injectors and spark plugs as they slide past each in turn. The result is a “firing order” for our 5 -cylinder engine of 1, 2, 3 – rotates around the 3 sparkplugs in turn.

What is possible in the future, in a motorcycle engine?

Lighter weight, smaller size and a new set of chassis design freedoms. The center of gravity of the Duke engine lies on the crankshaft axis (like a boxer engine or Wankel) – much lower than in a typical “stand-up” inline layout.